Quite a few people have asked me over the years about the correct amount of pressure when using various polishers, especially concerning the Porter Cable 7424 XP.  Even with years of experience, this is a very tough question to answer correctly.  Reason being, there are numerous variables and goals within a polishing process, which will undoubtedly affect the technique used during the process.  Also, different people are stronger or weaker than others, so asking to answer it simply is nearly impossible.

That said, I’ll try to explain it as best as possible in this article without going into too much detail.

What Is The Goal?

I believe the first variable is figuring out exactly what’s to be done on the paint in terms of polishing.  Generally speaking, more pressure leads to more correction, but that’s not always the case and that may not always be exactly what you want.  It’s not always the case because on certain vehicles, it’s much more efficient to let the polish and pad do the correction by applying only moderate pressure, as opposed to leaning into the pad as you would on many other vehicles.  Pad and polish selection, as well as the obvious vehicle in question will determine how much pressure is preferred to do as much correction as possible.  On the other hand, it may not be always what you want in certain situations.  For example, if you plan on doing only one stage of paint polishing, you surely don’t want to rely on a lot of pressure to correct the paint as it may leave marring that will necessitate a second polishing stage.

What Type Of Paint Is Being Polished?

As mentioned above, different paint will react better or worse to a lot of pressure during polishing.  Black, sensitive paint like we see on jet black Porsche, BMW and Subaru for example, will react very poorly to a lot of pressure because this pressure will lead to a lot of left over marring to be corrected with a second polishing stage.  In many cases, if you are too aggressive with such paints, you may end up needing a third polishing stage to fully clean up the marring and buffer marks left over from the initial compounding stage.  Conversely, paints that are hard to correct, such as those generally on Audi and Mercedes vehicles, react well to a lot of pressure as they tend to correct much better due to the additional pressure.  Again though, it all goes back to the question “what is the goal” because when working on a certain paint, you first need to know how many polishing stages will be done before figuring out the process and products to be utilized.  Which leads us to the next and final question…

What Type Of Polishing Pads And Products Are Being Used?

Once you know the process and on what vehicle it is to be done, the next step is to determine the products to be used with the polisher.  Pressure (heavy or light) doesn’t necessarily come into play only with compounding stages and multi-stage polishing.  In general, more pressure is good for compounding stages and light pressure works well with finishing stages, but this greatly varies on what polish and pad is being used.  On many paints, using a finishing polish at a slower speed with light pressure will lead to polish/pad induced marring, whereas introducing more pressure will leave a perfect finish.  In short, the products and pads will have a big impact on how much pressure is best for the process in question.

All that said, there are general rules that we can always go to as a starting point.  As I mentioned above, heavy pressure during compounding works really well when using a random orbital polisher (I find rotary polishers like the speed and not much or a lot of pressure).  Light pressure works well during finishing stages where you don’t want to press into the paint much and simply let the pad and polish do the light correcting work.  To get a really good gauge of how much pressure is necessary, especially if you’re only working on a few family cars yearly, try some polishing on the vehicle and see what pressure and technique gets the job done best.  Then, get a scale and try to replicate that pressure to see at about how many pounds of pressure you need to do the polishing work.  Generally speaking, 25-35lbs is good for most correction work when using a random orbital polisher, but it should only be used as a starting point as stated above.

Well I hope this sort of clarifies the question many have been asking and gives everyone a good place to start the experimentation on their vehicles.  Thanks as always for reading and please feel free to leave any questions or comments below. 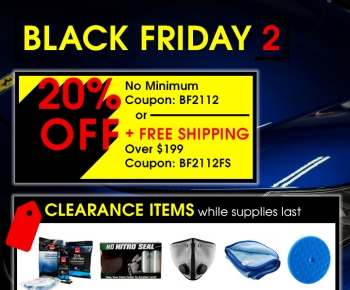