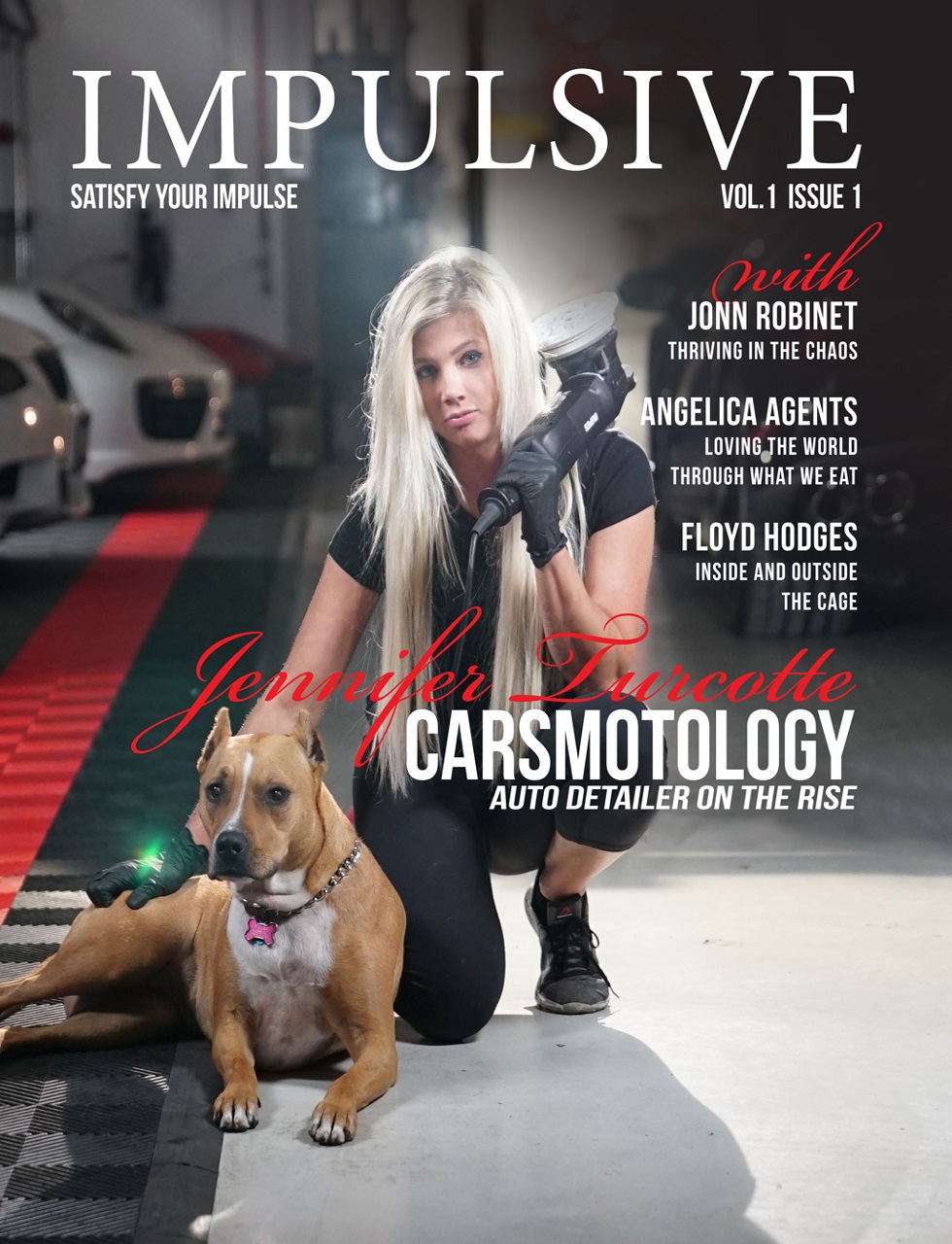 If you follow us on Instagram or Facebook, I am sure you have seen Jennifer and Carsmotology posted a few different times. We have worked with Jennifer on a few occasions including featuring her in our wallpaper calendars. For this post we’re posting Jennifer’s featured article in the premiere issue of Impulsive Magazine and she’s rocking the cover shot with her dog. Take a look at the entire article below, which covers Jennifer’s journey to starting Carsmotology and where they are today! If you are interested in reading the entire first issue of Impulsive Magazine, click here!

Written by Kaitlin Martinez for Impulsive Magazine. Released on Friday 10/6/17. 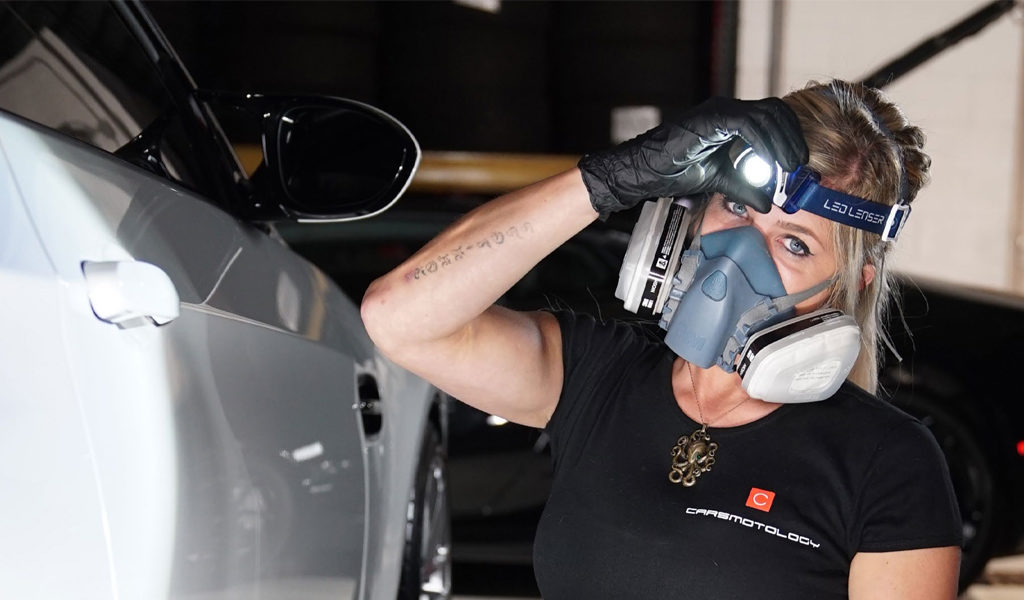 In Minneapolis there’s a one-of-a-kind car detailer that treats your car as meticulously, and thoroughly and with as much tender love and care as your go to salon stylist. “Carsmotology” owner Jennifer Turcotte had always referred to her business as a cosmetology pit stop for cars. That is because, like a beauty salon loves giving customers face-lifts, she loves giving “face-lifts” to her customers’ cars.

“I called it my car cosmetology for the longest time because that was the best way that I could describe it,” Turcotte said. “I looked at a car and I looked at my detail area as a salon. There’s so many different treatments and procedures you get done when you go to the salon, then you come out feeling amazing. That’s what I do to cars.”

She treats cars with so much care because having a love for cars started young. “My brother was into cars and I guess I was always into cars,” Turcotte said. “It’s one of those first jobs you get when you’re in high school. You’re working at the car wash. I started there and fell upon another full service car wash.”

Everyone else is thankful that she has dug in and made an outstanding career out of what other people think of as a “high school job”. On the “Carsmotology” Facebook page Tyler Christopherson gave her a five out of five review because she did such an amazing job, when he saw it, he wanted to go back on his plans of selling it. “Prior to selling my 911, I brought it to Carsmotology for a complete detail service. Jen worked tirelessly on making it look like new again. It looked so good, I didn’t want to sell it!”

Turcotte and her team also set a charitable example for the community. This past August, she and the “Carsmotology” crew hosted their last charity car wash for the year, and raised over $1,000.00 donated to local animal shelters, according to the company’s Facebook page.

What helped take Turcotte from working at a local car wash, to owning her own “car salon,” was someone coming along side her, and believing that she could do it. “There was a boss there that took me under his wing,” Turcotte said. This especially helped Turcotte after losing someone close to her that she also looked-up to: her Dad. “It was right after my Dad passed away. I always wanted to impress my Dad. And I wanted to impress [the boss]. He was like a father figure to me.”

With a successful business that establishes women can be pro car detailers too, is safe to say that she impressed them both. 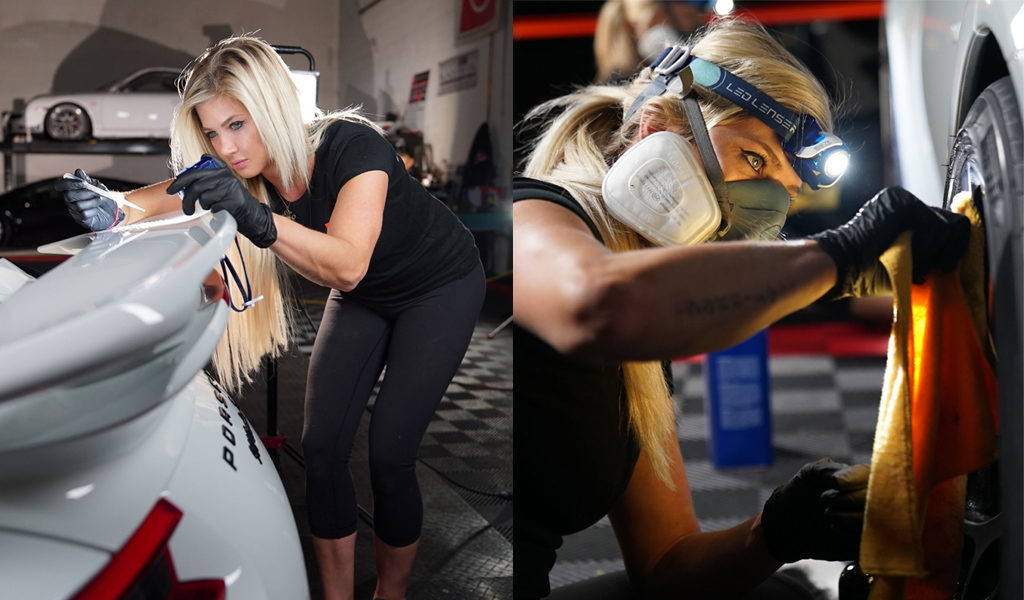 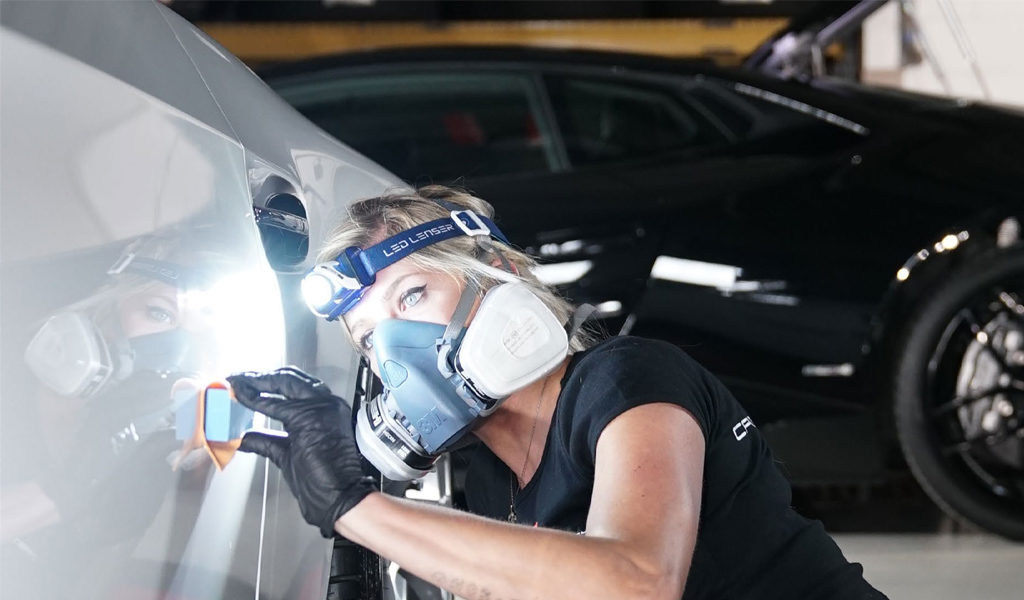 By 21 she was manager of a car wash. And has since made her own shop home for many prestigious cars and happy customers. But if her Dad and other role models are proud of her success, they can also be proud of the drive she has to persevere, even when business wasn’t booming.

“There was definitely a point when I started my shop—it was a really low point,” Turcotte said. “I went through a lot of hard times, and I could have lost my shop. But I realized even though I was going through the hardest times, sleeping in my shop for over a year, I knew that it wasn’t always going to be like that. I was going to get through it.”

She continued: “I knew I couldn’t lose with the drive, and how much I cared. I just kept pushing through it.” Pushing through struggle and pain is admirable in a lot of ways. However, even Turcotte is starting to realize the wisdom in balancing her drive, with recognizing she cannot detail every car, at least not without self-care.

“I’m in pain right now,” Turcotte said. “Yesterday I had to have an ice pack on my shoulders. My shoulders, if you touch them right now, they feel like they’re bruised. It’s really hard on the body.”

While her current shoulder strain will go away in time, it is not lost on Turcotte that it would probably be beneficial to her health and business to treat her body as well as she treats her cars. “The one thing that I need to do is take care of myself, Turcotte said. “Because I feel like my warranty is going out.”

Since she has so much she wants to do, it is difficult to balance doing what she loves in the shop, and leaving it to take a well-deserved cross-country road trip. “I wish I could be driving—I love driving,” Turcotte said. “And I would love to be able to drive across the country. I’d stop at detail shops and be like, ‘Hey, I know you guys are working really hard here. I just want to come by and say hi, hang out.’ [I want to] let them know that I know how they feel, and help them get through the day.”

Watching and helping people do what they both love is on her bucket list. Another item on it is to come out with her own product line, which she wanted to keep under wraps.

Because the best surprises are ones the world doesn’t see coming.

Another item on her bucket list is at some point being able to pass on what she knows to other aspiring detailers and lovers of cars. While she may not be doing that in a way that she envisioned, in her “garage classroom,” she is already making an impact. On top of admiring her work ethic, Christopherson, father of Crosby (age nine) Harper (age seven), appreciates the example she sets for his two girls. “I’m a father of two little girls and I bring them with, just to see her working with cars,” Christopherson said. “I want to instill in my daughters that they can do anything they want.”

Turcotte’s piece of wisdom for aspiring car detailers is personally put into practice: find a mentor that believes in them like her first boss believed in her. While Turcotte’s unique circumstances made the dynamic a bit more personal, she still cannot understate the importance of finding people to bounce ideas off of, that are willing to encourage you and push you to go as far as you can. “It’s good to have your own little council,” Turcotte said.

While she is adding adventures to her bucket list, Turcotte is perfectly content enjoying making people’s days by giving their cars face-lifts they appreciate. “I like it when [customers] pick up their [cars],” Turcotte said. “It doesn’t even bother me when they have a bunch of stuff in their car. I like to take it out. I’ll put it back in, then I’ll organize it. Because not a lot of people have time, you know?”

Turcotte continued: “I want them to get in their car and be like, “Oh my god! My car was in a safe spot!” Knowing that what you treasure was in a “safe spot,” is a good feeling. In fact, Turcotte feels the same way about “Carsmotology.”

“My significant supports my long work hours and what I am trying to achieve. Having that support helps fuel me everyday and I am very grateful [for him].” You can visit Carsmotology at Imola MotorSports. 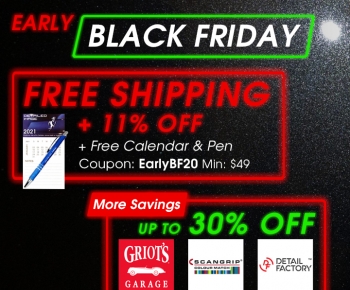