The paint safe 3M Automotive Masking Tape is great at protecting your trim you don’t want hit with your buffer or hand applications. Apply it before polishing, glazing, sealing, waxing, treating your trim and so much more. It will help ensure you don’t damage or treat any surface that you didn’t intend to treat. If you get some sealant or wax on your trim you can get that dreaded white stain left behind that can be challenging to remove. Instead take a basic pre-caution and tape off your trim to avoid this issue all together. This multi-use general masking tape applies easy and removes easy, leaving no sticky residue behind.

After trying all kinds of tape, I have finally settled on 3M Automotive Masking Tape.  I used to be a big fan of the 3M delicate surfaces tape, but I started to have issues with the adhesive “melting” and being left on the surface a bit too easily.  I assumed initially this was just during the warmer months, but it seemed to happen more and more throughout the year.  Also, it came off a bit too easily not only during polishing, but also if left on the surface for a few hours.

From there, I quickly switched to the Meguiar’s (now discontinued) tape and that worked great for the last few years.  I only recently found out that it was discontinued as I had stocked up on quite a bit of it months ago, so I was forced to purchase some of the new 3M tape.  The new 3M Automotive Masking Tape and their Automotive Performance Masking Tape have both been working great ever since.  I’ve been using them over the last couple months and with no knowledge whatsoever about the subject, I would assume 3M and Meg’s simply decided to offer one tape for sale and it ended up being the current 3M versions of the tape.  Reason I say that is because they’re extremely similar, or even the same, but I honestly don’t care either way as it works very well!

The main thing I like is the fact that it sticks to the surface continuously so I don’t have to simply tape up a panel just before polishing it, then remove the tape before it comes up and starts leaving sticky residue on the pads.  There will be times when the tape is covering a gap, such as between the windshield glass and roof edge, in which case the tape may come off if not enough of the edge is adhered to the paint.  This is a rare occurrence, but it’s worth mentioning.

Another great thing about the tape is that it’s extremely easy to use around corners and rounded edges, so protecting stuff like sunroof trim, window trim and around mirrors is a breeze.  Sometimes tape will quickly adhere when applying it to a rounded corner, but then just as quickly slide off, leaving residue and uncovered trim.  That’s not the case with this tape at all.  The Performance version is best for this as it sticks a bit better and has a tighter edge.  Thus, I normally use the performance version for trim that’s rounded (sunroofs, mirrors, grilles, etc.) or trim to which tape doesn’t stick too easily and the regular version for trim along the bottom of the car, windows/glass, etc.

I typically use the 18mm tape as it allows me to get in the tighter areas and can cover quite of bit of trim on the car, but the 36mm version also has its place when it comes to covering some larger gaps or plastic trim pieces.  In any case, I would definitely recommend this over any other tapes on the market, but realistically I haven’t tried them all, not yet anyway :).  Lastly, I’ve also found a use for it in marking some bottles of polishes/cleaners, so that’s just another plus. 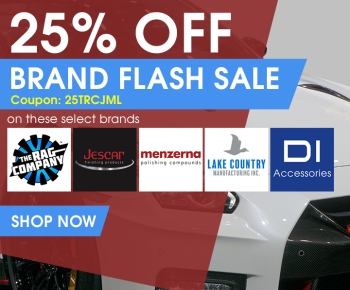