Over the last few years, the Detailed Image Ask-A-Pro Blog has not only brought product and technique information from some of the best professionals across the country, it has witnessed the growth and expansion of professional high-end auto detailing and service. As such, and with such talented members of the AAP team during this time, there has been plenty of praise for the authors across the board. Recently two Ask-A-Pro authors received more national attention in being featured in DuPont Registry.

Famed detailers and blog authors Greg Nichols from Reflections Detail of Utah and Marc Harris from AutoLavish of Michigan were asked to be a part of a multiple month full page spread in DuPont Registry, the first ever in the magazine showcasing auto detailing. 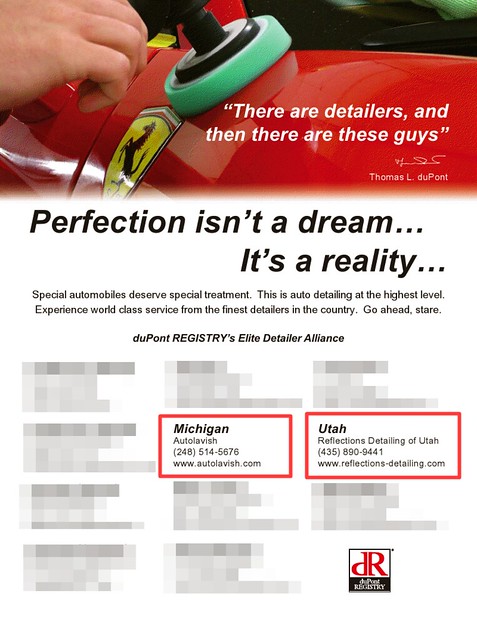 While there are many quality detailers across the nation, more often than not Detailed Image Ask-A-Pro authors are making headlines in the world of high-end detailing and paint correction services. Some other noteworthy accomplishments from blog authors you might remember (in chronological order):

Prior to the AAP Blog going public, author and famed detailer Todd Cooperider from Esoteric Auto Detail of Ohio was named one of the Top Nine Detailers in a 2009 Autoweek Magazine spread along with fellow author and famed detailer Ivan Rajic from LUSTR Auto Detail of Chicago. Both these gentlemen represent not only high-end quality detailing and paint correction, but areas of the country that not often are thought of a “car havens” which only further proves their skills, abilities, and reputations.

Through the launch of new products like Meguiar’s Microfiber Correction System, several authors were invited to play a major role in final testing of this system prior to the product’s release. Authors and famed detailers DJ Mayo of Virginia, Chad “Rasky” Raskovich of Minnesota, and Eric Schuster of Southern California joined fellow bloggers Todd, Ivan, and Greg along with others throughout the nation in giving final evaluations and certifying the product for release. In this way, the Ask-A-Pro Blog Authors were vital in one of the biggest product releases from a major manufacturer of recent times.

In January, Marc Harris from AutoLavish of Michigan was interviewed as part of an online article on high-end detailing from the Canadian site Sympatico.ca. While the article focused on the attention to detail, experience, and knowledge of high-end paint correction and detailing, it also further proved that the authors of the Detailed Image Ask-A-Pro are not only known and respected in their local markets and on a national stage, but also internationally as well.

The Ask-A-Pro blog authors are here to help you elevate your knowledge and skill set. While it’s hard to put a particular technique into words, it’s our goal to build confidence, trust, and motivation with our audience so they may develop their own skills. The level of detailing we strive to teach is respected by many of the top owners, manufacturers, as well as collectors and should bring some comfort that fellow detailing enthusiasts are in the right place, and are getting their information from the right people.