Cleaning microfiber towels is one of the mundane and basic of chores in detailing. You certainly don’t see a whole lot of posts on social media of someone washing their towels as you see on other aspects of the detailing process. It’s one of those behind the scenes type of things in detailing. With the advent of ceramic sprays and hyper sealants, it has always been difficult to rid microfiber towels of these products from the fibers. There have always been specialized detergents to clean microfiber towels, but none that in my experience could properly restore microfiber and make them un-hydrophobic.

P&S in collaboration with The Rag Company set out to do just that with its Rags to Riches Premium Detergent. This detergent was developed to deep clean and restore the absorbency of microfiber towels used in detailing, most especially microfiber used for today’s high-powered sealants and silica spray products. P&S Rags to Riches is a concentrate and was formulated for use with both residential and commercial washing machines and is also rated for High-Efficiency machines. 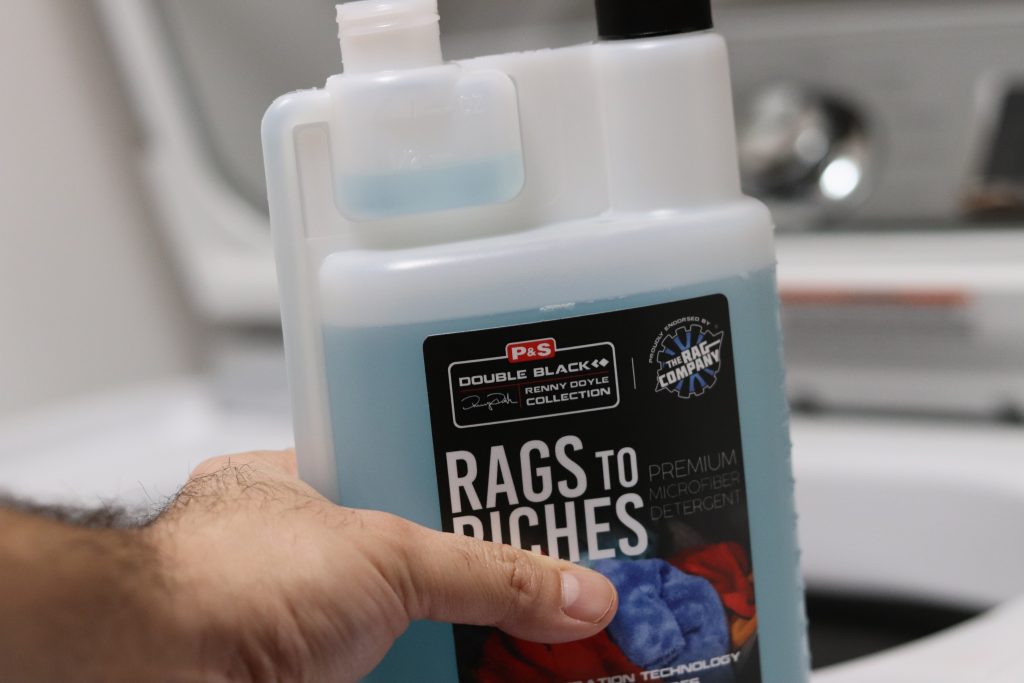 The first thing I noticed was the unique bottle design. It has a built-in proportion system which makes pouring in the exact amount extremely convenient. It also has a separate pour to allow for larger pouring applications. P&S Rags to Riches is a high concentrate and it is recommended by P&S to use 1 ounce for lightly soiled or small loads. 2 ounces are recommended for larger loads. 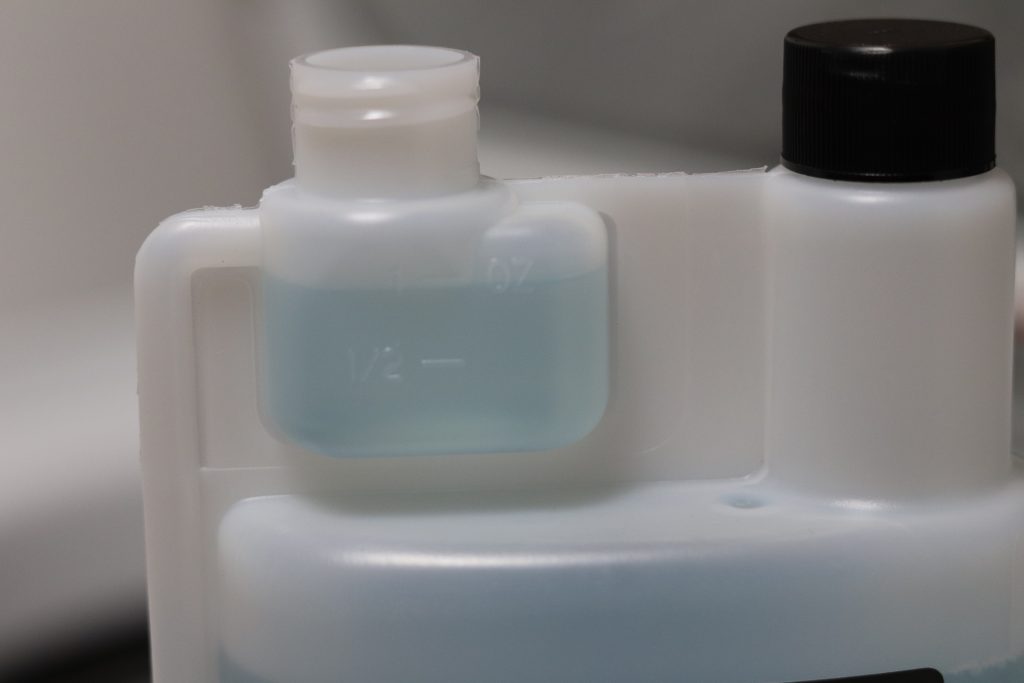 I was curious to see if I would see a difference in my recently washed microfiber towels. So I took a few of my Rag Company Eagle Edgeless Towels and rewashed them in P&S Rags to Riches. 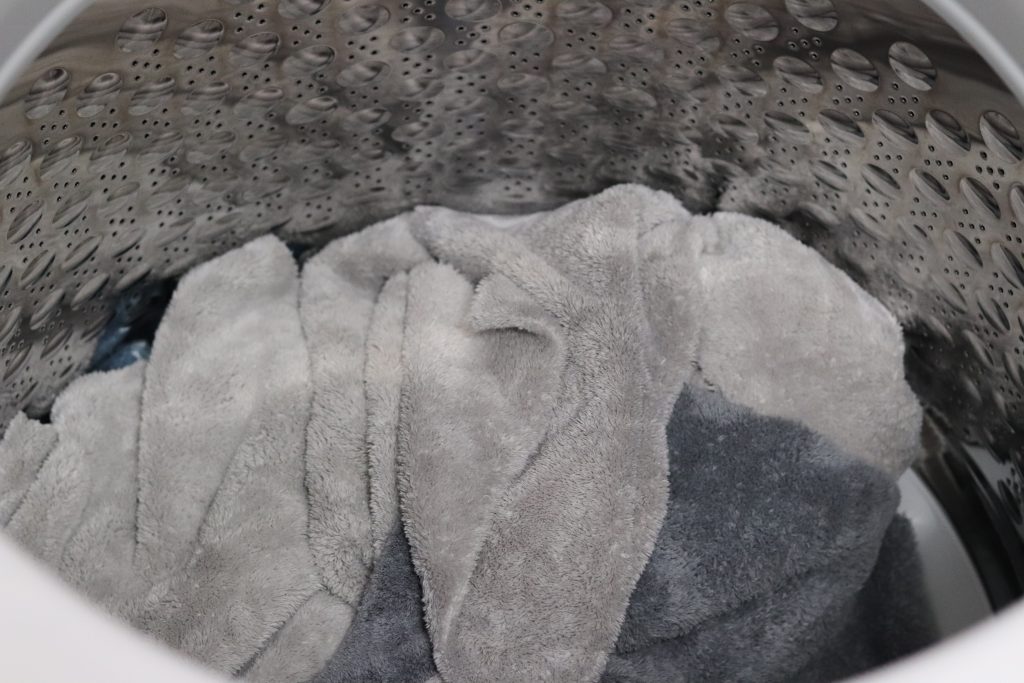 I followed the directions for a small load of towels. 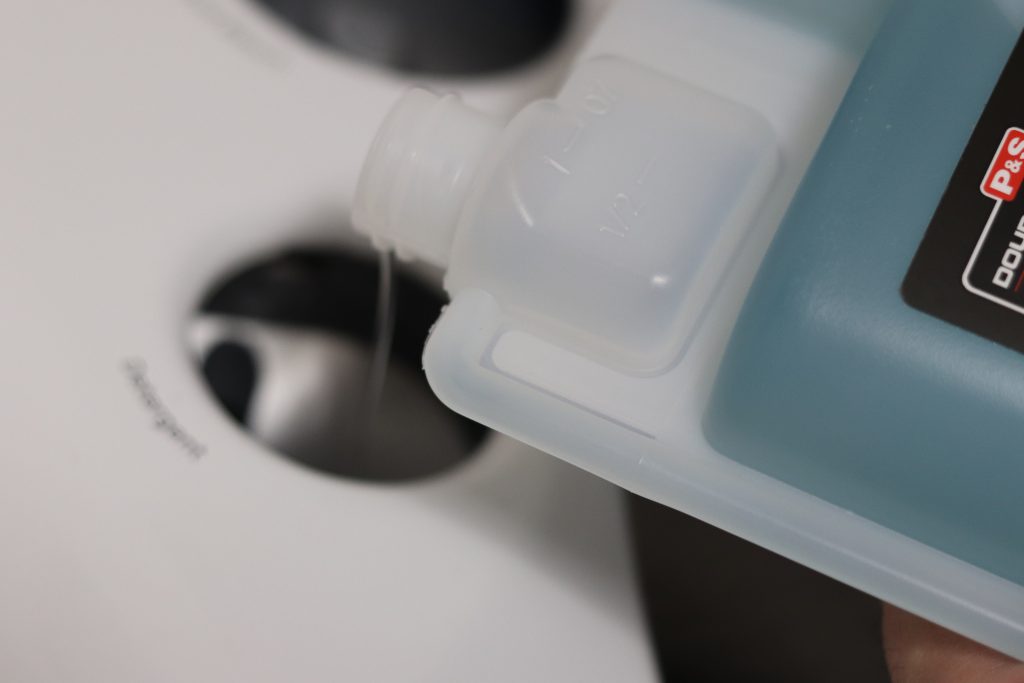 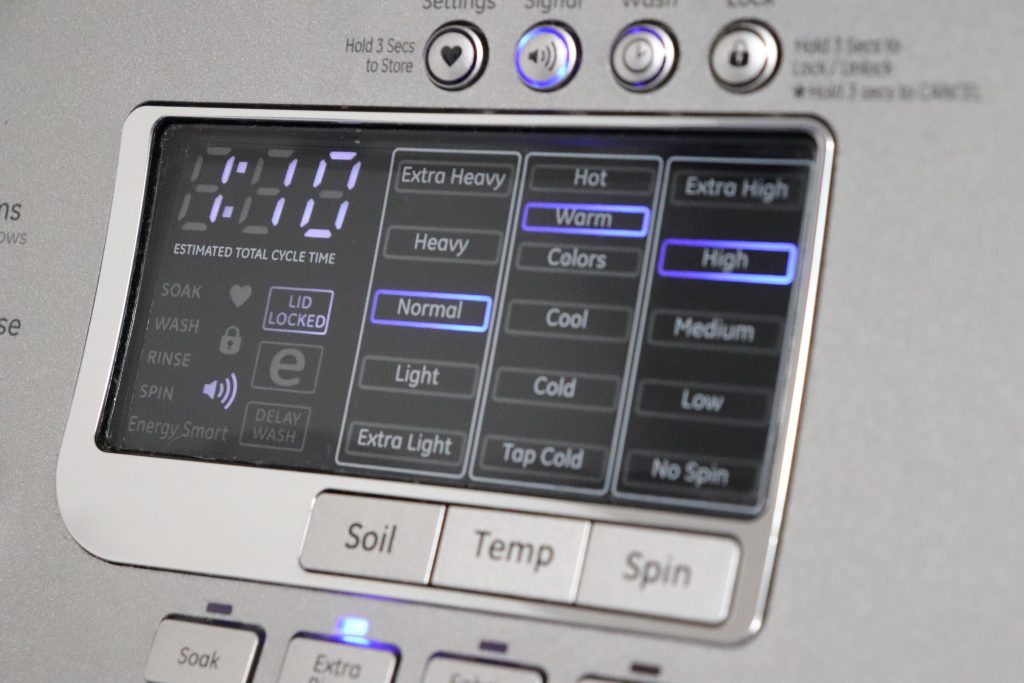 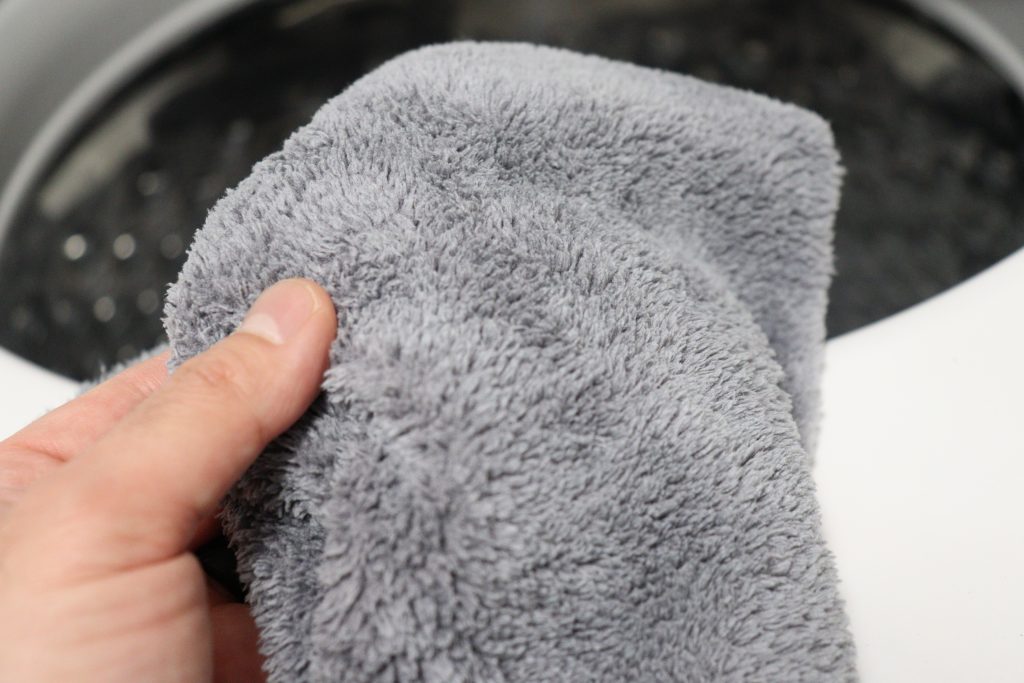 Once going through the wash cycle, I was extremely surprised as I opened the lid and pulled out one of the towels that had been washed with P&S Rags to Riches. The towel felt newer! With the previous detergent I had been using, the towels had a different feel to them out of the wash. Very difficult to explain, but the Rags to Riches washed towels felt softer to me.

It was on to the dryer. P&S recommends hang drying them or using a low setting on a dryer. I for one only hang dry my drying towels, but for other microfiber I use a dryer. 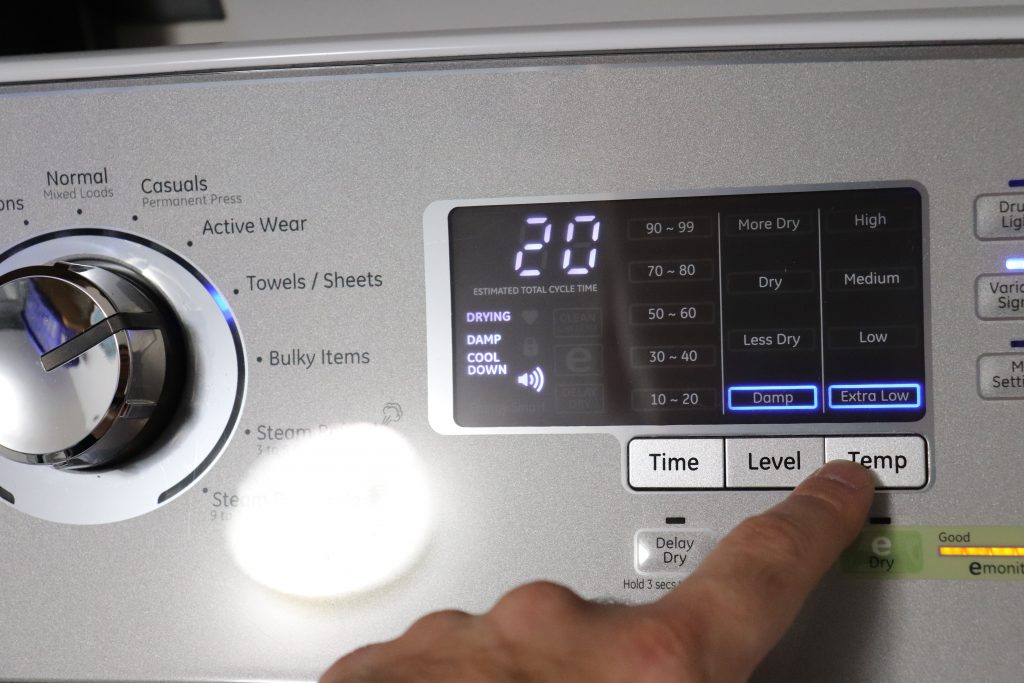 Once the drying cycle was finished. I pulled the towels out and compared them to others that I had previously washed with the other detergent and I noticed 3 things.

As advertised, the Rags to Riches did restore these towels to a newer state. The towels did not have a scent, which I particularly like. I was especially impressed by its ability to remove the sealant and similar product residue from the fibers that the other detergent left behind.

This left me to think, how well would this do on towels used for applying traditional ceramic coatings? I’ve often tried this method of soaking towels during the coating process in a bucket of warm water with a little vinegar and/or APC. Truth be told, they weren’t always completely un-hydrophobic but soft enough to safely reuse. 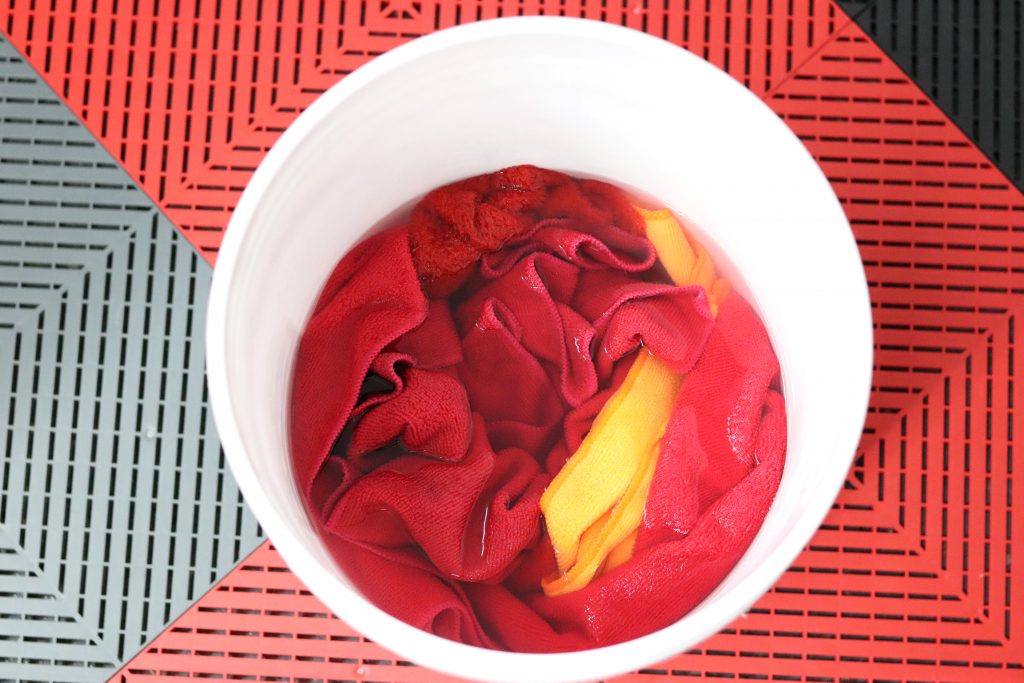 So on my next project, I took my usual bucket of warm water to which I added and mixed 2 ounces of P&S Rags to Riches. As I coated the vehicle, I would place the used towel in the soaking solution. According to The Rag Company, Rags to Riches does better with coatings that tend to leave the applicator or towels soft after use. For this test, I used 22ple Mistico Element which always hardens applicators and towels. This is why I believe I’ve not had too much success with my previous soaking method. The towels have always had some hydrophobicity after soaking them and washing them.

Once I finished coating the vehicle, I had the towels soak in the solution of warm water and Rags to Riches for a few hours prior to washing them. I did not wash these towels with any other towels and I recommend washing coating towels separately. Although the wash load was pretty small, I used 2 ounces of Rags to Riches to wash these coating towels.

Again, to my surprise, the towels felt as soft as the other towels I had washed in Rags to Riches. I dried them and then it was on to testing them to see if they had any hydrophobic properties after washing them in Rags to Riches

The towels passed! I poured water on them and they soaked up the water without any beading. 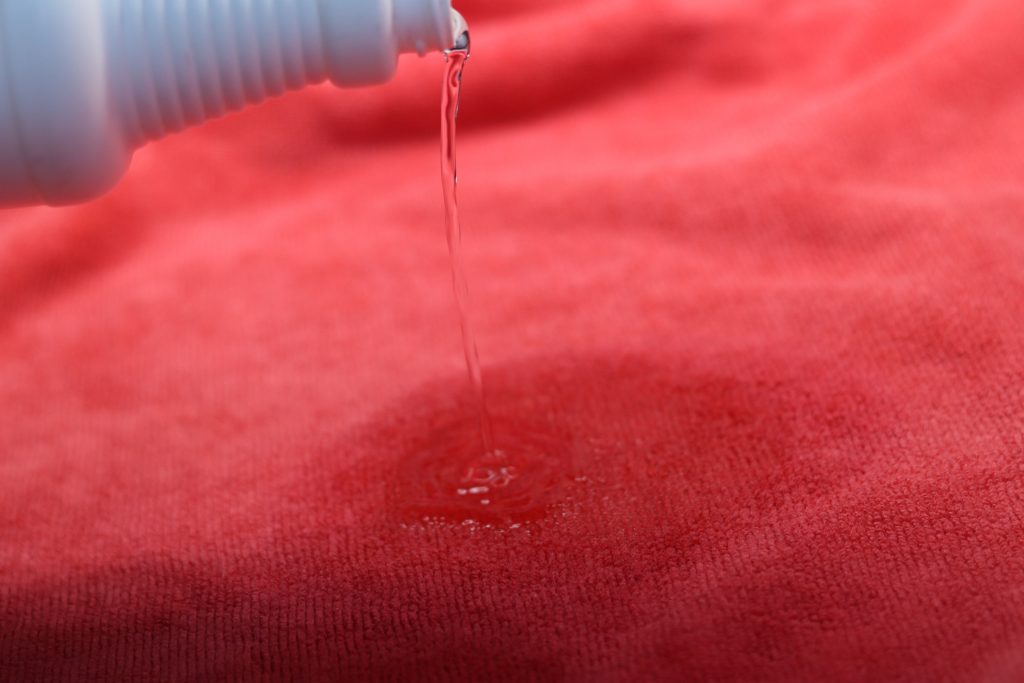 The science behind this product performs as promised. In fact, I went back and rewashed all of my microfiber towels. It’s always nice to see a product that works as promised and for me, this product has worked great. I’ve been using Rags to Riches for about a month now and It’s become my new detergent for washing microfiber. It’s a super-concentrated detergent that goes far. This will certainly save money on detergent while taking the guesswork from how much to use due to the bottle design.

Be sure to check out the product review video I did on P&S Rags to Riches below. There are certainly some general tips to washing microfiber in that video.

Hello, everyone. Mike Cardenas with Forza Detailing and Detailed Image, here where a product review for the latest from P&S, their Rags to Riches premium microfiber detergent. Now to put the detergent in it’s pretty easy, they basically have a opening right here. You can pour it in there, but they actually have a built in proportioner into this bottle with you see this on the side, it’s pretty nifty. It reads ounces on one side and then mills and the other. For small loads, they recommend that you use about one ounce, on a much larger load of towels, then use two ounces. To use this, it’s pretty easy we’re going to do is just screw that and then you simply just squeeze it like you would a proportionate and then you’ll see the liquid just start to fill that up. So you get to one ounce. Boom. Now you can actually pour that into the detergent, pour that in there. So now it’s perfectly mixed, ready to go.

Next, it’s time to set the washing machines. We’re going to do towels. They do suggest to use warm water. So we’re already set to there and we are ready to go. Now, one of the things I’ve noticed with using Rags to Riches is before I put the towels into the dryer, they already feel clean. They just feel differently than any other microfiber towel that I have pulled out of a washing machine. It’s just, it’s, it’s hard to describe almost as if you are a washing might sound silly, but it’s, it’s kind of the feeling when you’re washing a brand new towel.

Now for most of us, we use a dryer to dry our towels. So the one thing I always suggest is to make sure that you put your temperature on the lowest sertting, extra low on for mine. I’m going to go with damp. These are almost, they almost feel, I mean, they’re nice, they’re slightly damp and they almost feel dry. So for me on the damp level, always does the trick. Now these are Eagle Edgeless towels that I use for silica sprays, sealants, things of that nature. Now this one is one that was previously washed. You know, I actually had previously washed this with another microfiber detergent and this one is the one that’s washed with the Rags to Riches. You can see it’s still hydrophobic after it’s been washed. It still is hydrophobic. This is with the other detergent that I actually had to wash these towels with before.

So, you know, even though they were, there was still stuff in the fibers. Now on the Rags to Riches side, if we put water on them, you’ll notice that they are pretty damp. It’s, you know, that’s pretty crazy. How can you think of towels, you know you can put so much water into these, but you’re still hydrophobic. And then something like this is just damp. That is pretty impressive. So it actually has removed a lot of the stuff that’s in here. That’s pretty cool. Now whether you’re a detailing professional or a detailing enthusiast, cleaning microfiber towels, it’s just part of the gig. Unfortunately, the towels we use, as we all know, they’re not exactly cheap and arguably probably one of the most important tools we use in detailing. So if you’re looking for something that will clean and restore your microfiber towels, then consider the Rags to Riches from P&S. And it’s now available at DetailedImage.com.