Lights, ah those wonderful inspection tools! Without the “Light of Truth”, ie, the sun, to illuminate defects in your paint while you polish inside, under shade, or on lower panels, we resource artificial lights to aid in our defect-hunting. While we have been using the Brinkmann Dual Xenon for a few years already, we have been using the Brinkmann Dual LED version for over 6 months with great results. Now, Detailed Image has the latest and greatest Brinkmann on the market: The Pivoting Dual LED Brinkmann. They also carry the classic, the best value among all detailing flashlights: The Dual Xenon Brinkmann.

There are many types of lights professional detailers use: Halogens, Incandescent, Fluorescent, High Intensity Discharge, Light Emitting Diode, etc. Most are portable, all require a power source. Some are mounted in the ceiling, others have stands or tripods, but the easiest to use and the most cost effective are handheld, ie, flashlights. A good flashlight will light up your work and let you see any defects remaining in the finish before you can call the job DONE. Many “detail shops” seem to forget to inspect their work with correct lights, and the results are those unsightly buffer trails and missed defects visible as the vehicle drives in the sun or under street lights at night. To acheive perfection, lights are a MUST! Detailed Image now carries what may be the most popular flashlights used by professional detailers the around the world: the Brinkman series of flashlights. AutoLavish Fine Automobile Detailing is proud to discuss these two most popular versions, our findings from the field with some pictures, in hopes you decide to pick up a few!

There are many technical details on light. At a microscopic level, light is a wave, and it is a particle. Its discovery and analysis has transformed science as we know it many times. It holds the history of the universe, makes evolutionary life possible, and as scientists are discovering still, may hold the secrets to time travel. So much for just photosynthesis! We’ll leave all the micro-level science and advanced math to the scientists, and talk about how light can help you perform a better job at detailing.

The total amount of light output from a source that falls onto its subject is measured in candela. What detailers are more interested in is LUMENS; the amount of humanly-visible light emitted by a light source. The higher the lumens rating, the “brighter” the light will appear. Many lumens is good, but too many can be a problem as it becomes too bright to use, causing glare and, if used improperly, eye damage. Both Brinkmann flashlights have enough lumens to get the job done, and then some. We will explain better later on down. The more common tried and true Dual Xenon version puts out around 120 lumens. The Dual LED version has a whooping 300 lumens. Both have their uses, explained further below. First, some more theory.

Xenon, a noble gas, it thought to get its name from the greek work for “strange”. It was discovered in the late 1800’s, but took half a century later for the company Osram to use it for lighting purposes, and half a century more for Xenon to make IMAX possible. The Brinkmann lamp emits an almost-full spectrum of light color, closely resembling the sun’s spectrum. Similar to an incandescent bulb, Xenon bulbs use a metal filament to conduct an electric arc. This arc excites the Xenon gas trapped inside the bulb enough to create plasma, a super-heated molten state of matter with so much energy that light particles shoot out far from the plasma cloud. These light particles are usually focused in a general direction right from the bulb, with additional focusing enhanced by reflectors around the bulb per se. The result is, basically, a bright white light.

LED stands for Light Emitting Diode. These diodes are semiconductors that present electroluminescence, a physical phenomenon that occurs as electrons trip over holes in the diode substrate. The color and output of LEDs depend on the energy the electrons carry, the amount and spacing of the holes in the substrate, among other things. Invented in the early 1900’s, LEDS just recently have become powerful enough to be used for lighting. As semiconductor technology continues to grow in leaps and bounds, expect LEDs to become the main source of portable light in the world. LEDs are extremely efficient, require a fraction of the power of any other light source, run much cooler, last thousands of times longer than incandescent bulbs, and can be made safer than other types of bulbs regarding shattering and mercury content (most Xenon bulbs contain Mercury and other elements). Today, CREE LEDs are changing the way we look at lighting, as this low-power-high-output light source is planned for space travel and indoor food production, among other things. Further, LEDs offer an advantage over any other type of light of the same candela output: the ability to produce very singular color spectrums as their electrons vibrate at specific speeds exciting specific wave-lengths of photons. The Brinkmann LEDs emit a more pure-blue spectrum than the Xenon version. This will be apparent in the pictures as the light looks, obviously, more blue.

Enough of the theory! Lets get to making big things shiny.

DISCLAIMER: Due to differences in white balance, camera settings, paint, and hand position holding the flashlights for each picture, getting the full effect of the flashlights is hard to capture. Either flashlight will work great for any use. We have been using the Xenon version for a few years with great success. The LED, being available only recently, is a great tool, and has some advantages and some disadvantages compared to the Xenon version. Further, everybody’s eyes are different. I have very sensitive eyes and am usually wearing sunglasses when outside. Your eyes may be less sensitive. Also, results may be different on other colors of paint (part of the reason we like having both types of light).

First, you want a light with no light diffuser on the outer lens. This assures you are getting light straight from the source. As in sunlight, you will use this “directness” to evaluate paint by looking for reflection and refraction. The tighter the source of the light, the easier it is to pinpoint its reflection bouncing off the paint. Remember, we are not trying to illuminate a large area, nor do we want to soften the light to be more pleasing to the eye (where diffused light would be handy). We are trying to reflect an intense source of light off a very small area in hopes this intense light shows defects that the naked eye under ambient lighting can not produce. As the light bounces off the surface, scratches will show up with distinction. Light bounces off a scratch’s edges in a different angle/manner than the rest of the painted surface, highlighting the scratch if you will. You will use the flashlight, moving it around, holding it in a position where you can see its reflection, inspecting the surface, scanning it… 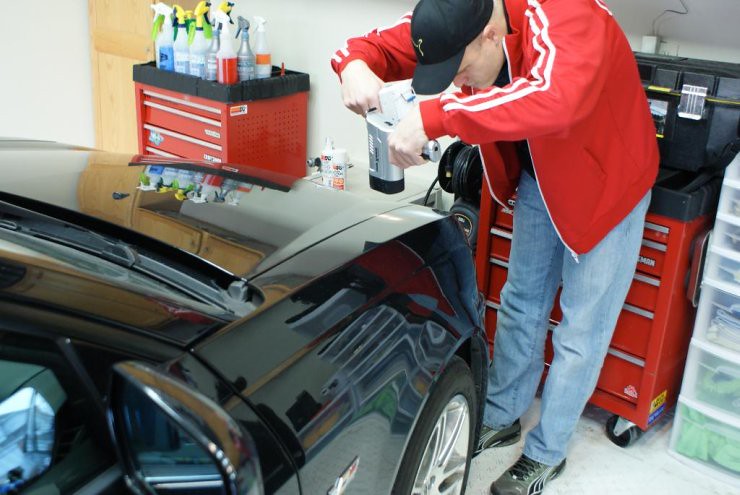 As a rule of thumb, the brighter a light, the better it is to highlight defects. But bright light is harder to look at. Since you will be focusing the reflection straight into your eyes, a powerful light becomes a big problem and hard to see with clarity. At the same time, you need enough power to light up the defect. You should always follow good judgement and use the lights sparingly, and quick. Once you see defects, move the light off a little or take a second or two to rest your eyes, then re-inspect as needed.

The different types of light will highlight scratches in different ways. We’re not sure it has anything to do with the light’s wavelength, but the LED flashlights seem to work better for finding slighter scratches, like machine trails, holograms, marring, etc. The Xenon flashlight seems to be better suited at finding heavy swirls and Random Isolated Deep Scratches. The biggest difference between the two off the bat, is that the Xenon flashlight is easier to look at when inspecting due to its reduced light output (lower lumen rating) and its wider light spectrum. You’ll be able to look straight into the reflection of the light much easier under normal conditions (the best way to visually locate RIDS). The defects show up in more vivid color as the Xenon’s light shifts off the defect’s edges. The LED’s light, being more blue, shows less detail in its reveal of defects, and the color is much more intense to the eyes. All defects look more or less the same white-washed color. The LED’s output means you can’t hold it as perpendicular to the surface as the Xenon with the same comfort, but it does great to highlight trail-marks and holograms by reflecting it at a lower angle. 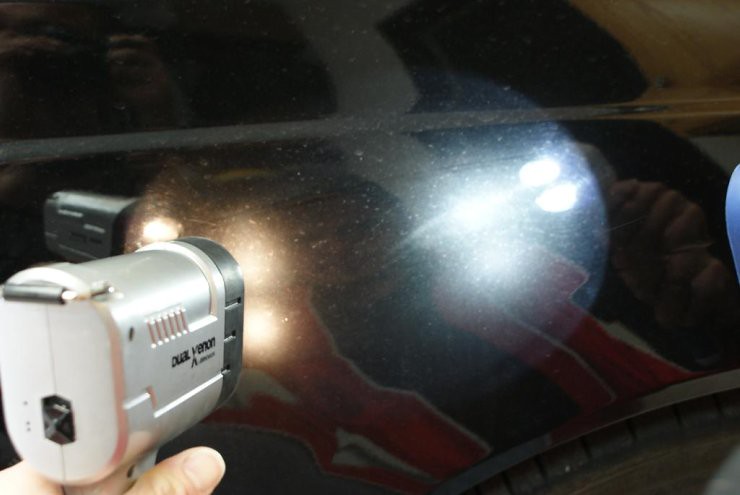 When starting to polish you will be looking for the larger defects. Here the Xenon is the perfect and prefered light. The LED will do just as good a job, but I find it too bright to look at (we use various shades of glasses to protect our eyes from heavy glare, all the way up to a Category 5 Welding shades!). 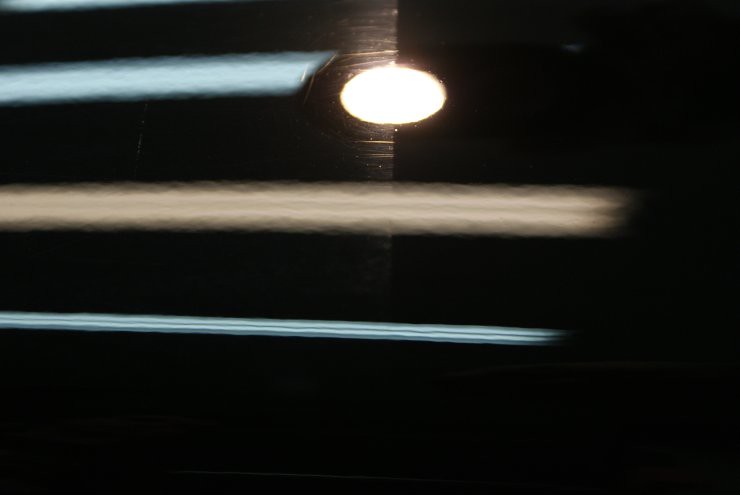 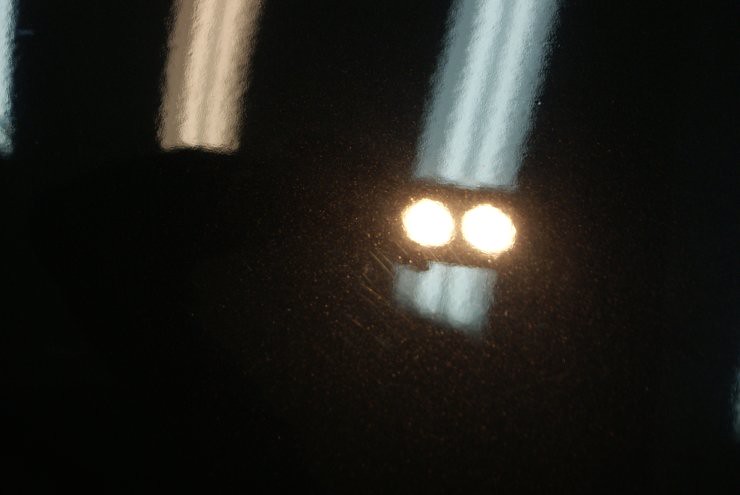 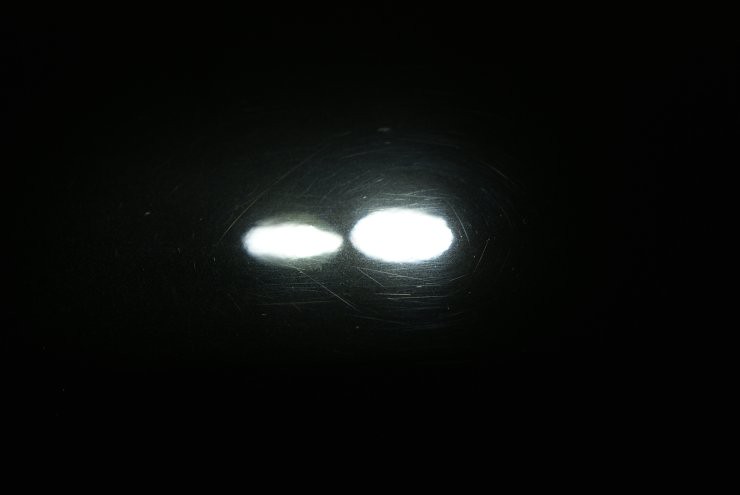 The Xenon has just the right brightness, and both flashlights have the ability to use only one of the two bulbs at any instance. Following one single light is sometimes easier than following two lights (Dual Xenon or Dual LED), as defects “hide” in the confusion at times. 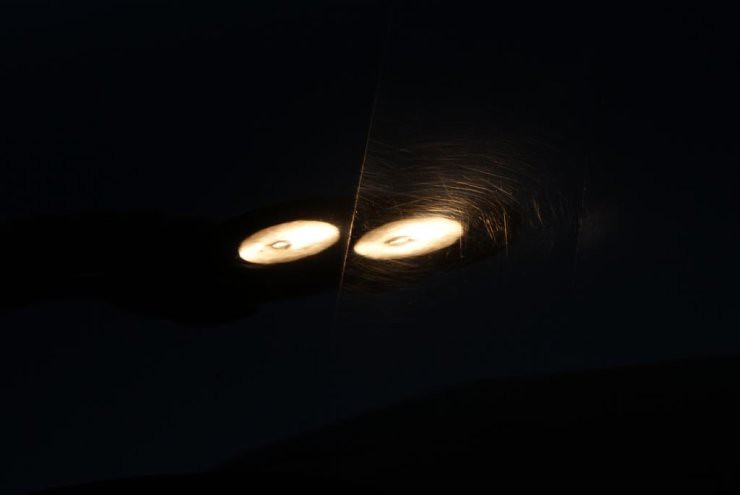 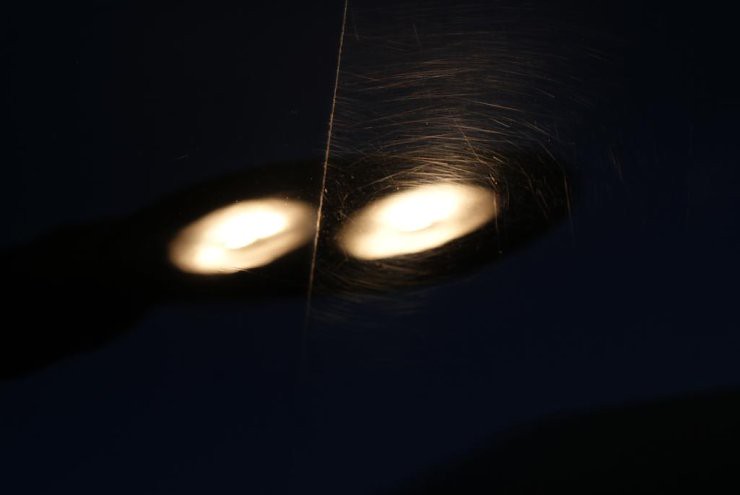 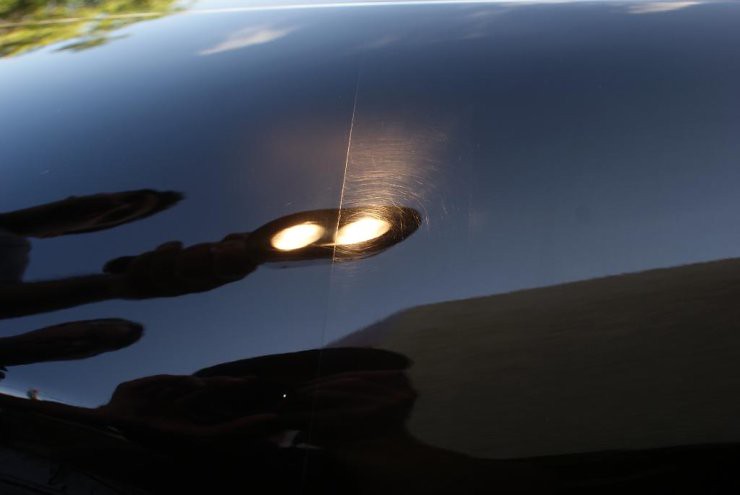 Once your first few polishing steps are complete and you are interested in finding hazing, marring, holograms, the LED lights takes the cake. Higher luminous output means the LED flashlight can be used at an angle to light up buffer trails far from the pinpointed reflection of the source (more similar to how the sun is used to show trails), and has the power to light up the slightest of defects.

This picture shows what looks to be a properly refined polishing stage under the Xenon Brinkmann: 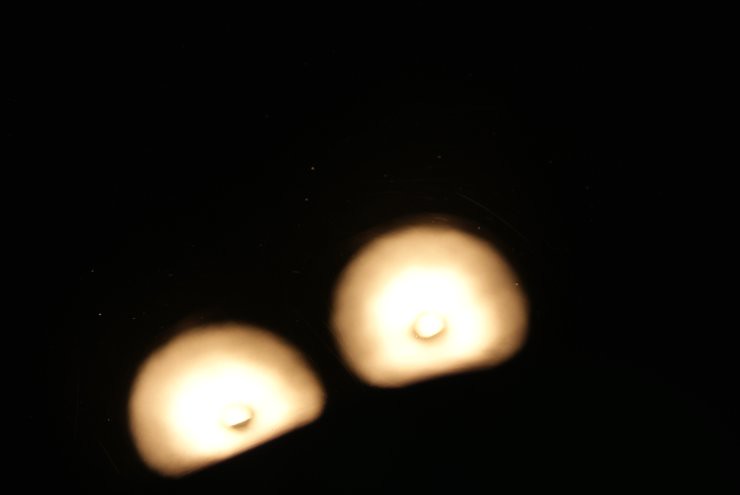 The LED Brinkmann held at more of an angle shows there is still work to be done. This was on a Jet Black BMW 135i: known to have very soft paint: 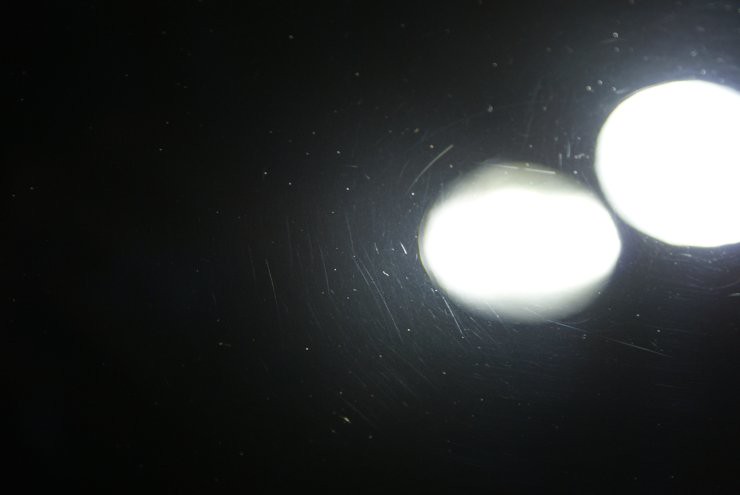 Once refined further, the LED shows the additional work was successful: 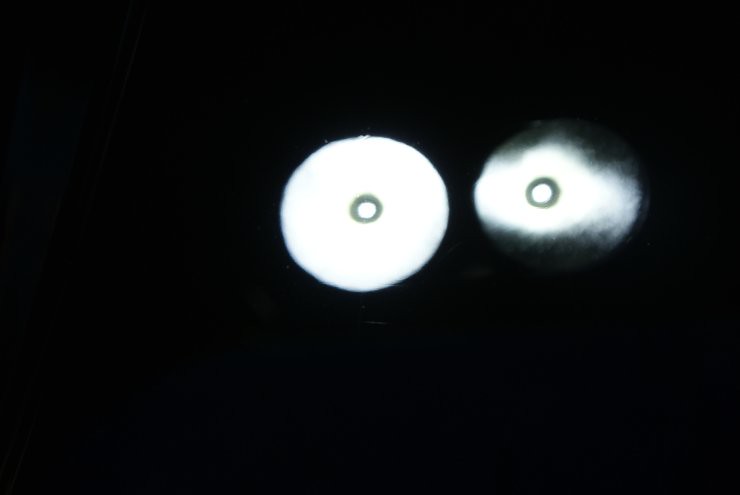 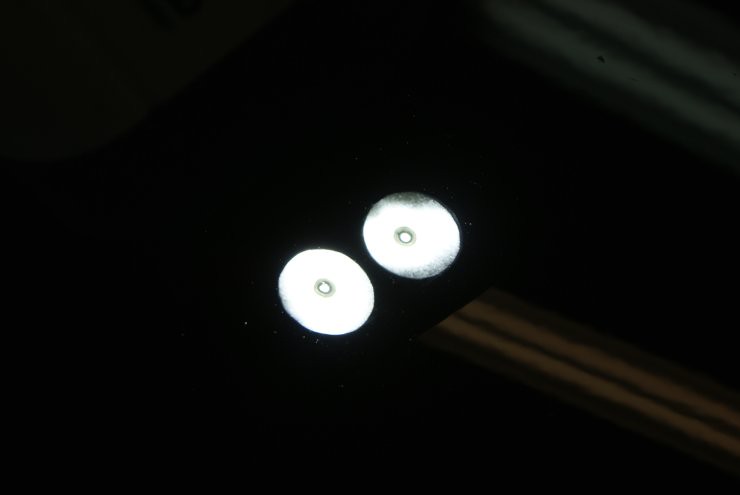 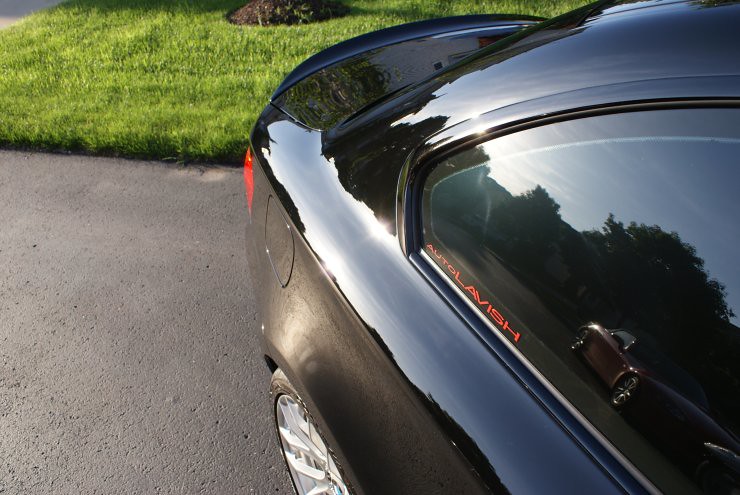 The Dual LED Brinkmann, due to the LED’s low power consumption, lasts longer on the same amount of charge. Expect to recharge the Dual Xenon after each vehicle or two, while the Dual LED seems to last at least double in our highly unscientific battery-life evaluation. Brinkmann seems to be evolving its LED flashlight offering, with the latest version carried by Detailed Image being battery powered. Previous LED versions have been rechargeable, but the LEDs consume so little power, being battery powered should not an issue. Be aware the LED and Xenon chargers are not interchangeable if you do want to hunt down the older version. The new swivel head is unique to Brinkmann, and should open up new possibilities on illuminating hard-to-reach areas and angles.

We hope this article helps to educate you on the uses from these latest Detailed Image products. If you have any comments or questions, feel free to use the comment box below – happy detailing!

-This article written by Jacob Bunyan: founder and co-operator of AutoLavish Fine Automobile Detailing of Michigan. Additional editting and information provided by Marc Harris of AutoLavish 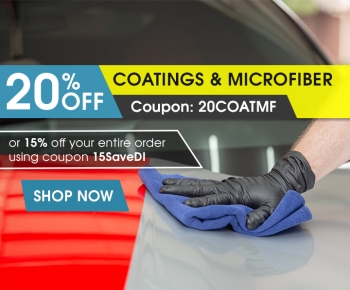