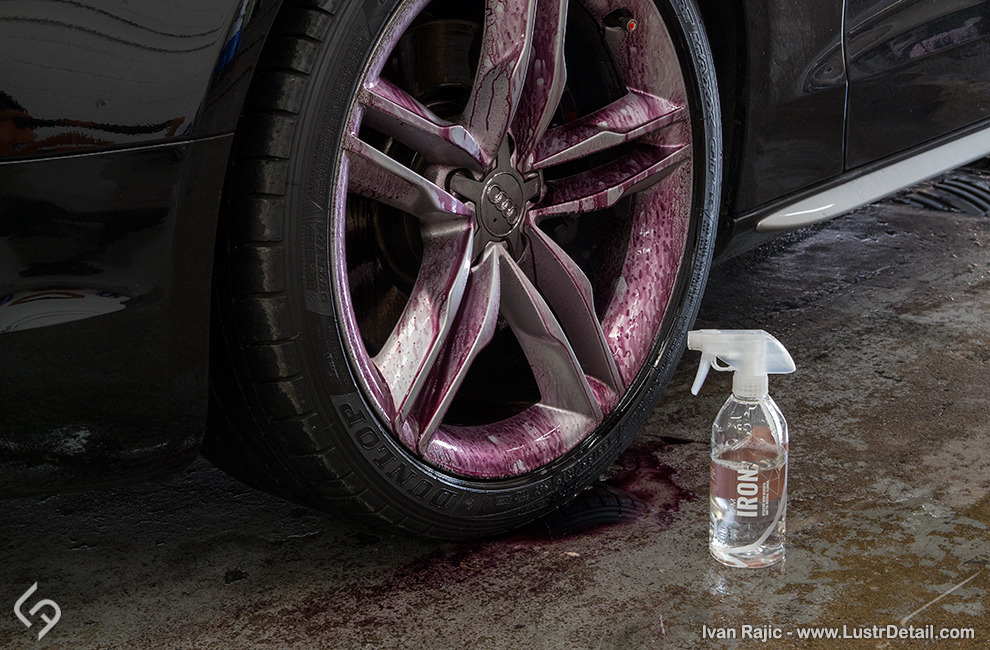 Rail dust is a combination of small specks that settle on the paint surface through daily driving from various sources.  One of these sources is the railroad as the trains kick off a lot of dust that ends up in the air then on the paint of your vehicle, thus the name rail dust.  However I call these specks “iron deposits” as they come from other things too, most notably from your or others’ brake pads.  These little specks are orange in color due to the rust and come in various sizes.  Sometimes they’re just light dust that settles on the surface and other times they’re a bit bigger and embed into the paint.  Unfortunately most people with daily driven cars have these little deposits in their paint job, but they’re most notable on white and silver/light grey vehicles.  The typical iron deposits end up on mainly on the back of the vehicle (rear of bumper and rear of trunk lid) due to the aerodynamics of cars in general, but there is usually a good amount on the lower areas just behind the wheels due to the brakes.  However if the car is driven near railroads often and especially if it’s parked near a railroad daily, these iron deposits will be all over the vehicle including all the top/horizontal surfaces.

So how do we deal with iron deposits?  Fortunately if you do regular maintenance these iron deposits are pretty easy to deal with by utilizing chemicals such as CarPro IronX or Meguiar’s Iron Decon.  There are many other iron removers from many manufacturers but these two are my favorite and perform best from my experience.  They all work on the same principle where the chemical breaks down the iron deposits so they don’t have to be mechanically removed.  As I mentioned above this dust can be of different sizes and embed into the paint more or less severely.  Thus some will require multiple applications with the chemical while others may disappear with just one.  The big variable is where the car is parked and how much it’s driven.  The more it’s driven obviously the more often you want to decontaminate it.  The worst case is if you work near a railroad and park there daily because the car will be covered in iron deposits frequently and require lots of maintenance.  The deposits from railroads are usually worse than the typical stuff from brake dust, so I’d recommend avoiding driving and especially parking near railroads as much as possible.

Overall I recommend doing a chemical decontamination anywhere from 1-6 months depending on how much you drive and where you drive.  If you slack on maintenance for a while and don’t do anything for 1+ years it’s likely the paint will need a good detailing with clay bar in addition to the chemicals.  This should be done every 1-2 years regardless as part of standard detailing, light polishing, etc, but if we’re only talking about iron removal you want to try avoid having to use clay bar if at all possible.

At the end of the day, iron deposits/rail dust is just another thing to include in your car maintenance routine. As long as you have the right products and keep up on somewhat regular maintenance, iron deposits shouldn’t be a big issue at all.

4 comments on What Is Rail Dust & How Do You Remove It?