At SEMA 2014, Detailed Image co-owners Greg and Mike sat down with Michael Mankarious from Einszett USA. They had the chance to sit down in the American Express Lounge for a quick lunch while running around during the hectic show. Michael shared some amazing stories and once Greg and Mike returned, they knew they had to get an interview article done to share with everyone on the AAP Blog. Below you will find some of the questions Greg and Mike asked and the answers directly from Michael!

Greg: Before getting into some questions about Einszett, can you tell me a little about yourself personally? What are your interests outside of detailing?

Michael: Thanks Greg for having me. I love the outdoors so I like going for a hike or stand up paddle boarding on the lake. It helps me get out of my head. I’m also a big fan of music so I try and catch some live acts whenever I get a chance. Austin is the self proclaimed live music capital of the world so it works out well. I love indie rock, electronic, jazz, blues, and the standards. Even country is growing on me since we moved the company out here to Texas a few years back. I also try and set aside some time every month to volunteer. It helps put everything in perspective. All in all, it’s safe to say that I have a hard time sitting still for too long.

Greg: Where did you work before Einszett?

Michael: Right out of college I was heading in the direction of law school but my life took a turn I didn’t expect and I ended up working at Bloomingdale’s. After that, I worked for a mutual fund company while detailing cars on the side and taking a body and paint shop class. I was doing paint correction and asking for $150 a car (this is back in the late 90’s). It was a tough sell until they saw the job I was doing. These days it’s much easier to command that amount and so much more. Well, the dot com bubble burst and so did my joy for working in a cubicle. I told friends and family I wanted to start something of my own and asked them for advice. Most suggested I detail full time, but I didn’t feel that in my heart that it was right for me. Then one friend suggested I sell the products I was using, that lit a fire in me. It was late 1998 and I decided I was going to quit my job at the fund company. February 1999 I quit my job and honestly, I didn’t have much of a plan – only some money that I saved up. Online stores were starting to pop up and so I started looking into different web designers to build a website. As fate would have it, one of the web designers was a family friend of the Sauers, which own Einszett. He ended up putting me in touch with Werner Sauer, the president of Einszett Germany. A few months after quitting the mutual fund company, I was in Germany as a guest of Einszett and the rest is history. It all happened so fast and it was a blessing that I stumbled on to Einszett!

Greg: What was the largest hurdle in helping Einszett enter the US market?

Michael: I can’t say there was just one but definitely translating the labels and catalog into English. Everything was in German! I would sit down with the German catalog of German products in hand and type each word into Babel (that was the big online translator back in the day). At the time, Babel wasn’t nearly as accurate as Google translator is today. There were words that would stump me for days, weeks or months. Words like “cleaning discs”. Turns out it was referring to the word “windshield”. I also had to make sure I complied with VOC laws and various other compliance issues. When you start a business, no one comes and tells you; hey you need to comply with these laws and these laws. Unfortunately, you might find out when someone comes knocking on your door with a fine. Fortunately that didn’t happen. I did a ton of research for months on end to make sure I was covering all my bases. And then there’s the other major hurdle: introducing a brand new product in a multi-billion dollar industry on a shoestring budget. The product line may have been decades old and established in Europe, but it was unknown in the US. The first few years were a struggle. I remember my first pallet and storing it in my parents garage. I outgrew that (actually, my parents wanted their garage back (haha)) so I rented a storage unit. After a year or so, the product line began to gain traction through word of mouth and eventually I was able to get a small warehouse. Now some fourteen years later, I look back and see where I started and where the company is now and feel very thankful. We are still a relative unknown but we have some amazing customers out there who are spreading the word. We owe everything to our customers.

Greg: Are there any different products or techniques you see detailers in Germany using vs US detailers?

Michael: It’s funny but the more I travel, the more I realize people are the same. Techniques tend to be the same but choice in products might be different. And with the internet, everyone is sharing the same techniques. I see the same methods whether I’m in Germany, California or in Puerto Rico. As far as products are concerned, there are some differences. In the early 2000’s when I told Einszett we needed a quick detailer, they didn’t understand what that was. That’s changed since then, but there is a good reason why some of the product choices are different and that’s because there are more restrictions in place for washing your vehicle on your home property, than in Europe and Germany in particular. That limits the number of end-user products sold. For that reason, most detailing happens at shops and car washes. We are also starting to head into that direction here in the US with the severe droughts in California and here in Texas. The car culture in the United States definitely shapes the detailing culture and therefore the product options.

Greg: Are there any misconceptions about Einszett or Einszett products that you can educate us about?

Michael: We’re still a family owned company even though we might give the impression that we are huge. That’s a good thing but it’s limiting in the fact that we don’t have the kind of marketing budgets the big companies have. Since the beginning we rely solely on word of mouth. It has proven to be reliable even though it can be slow going. Our main specialty at Einszett are alkaline-based products. We are one of the top suppliers in Europe for car washes including commercial and train wash systems. About 90% of our product line hasn’t been introduced to the North American market yet.

Greg: How much German can you speak now?

Michael: Sadly, not much. But when I go, I usually pick up after a few days and can understand some of what is being said. Truthfully, they speak English so well that most of our communication is in English anyway. Especially when Einszett importers from other countries are present. But it doesn’t mean I haven’t tried learning German. I have a funny story about a German language class I took a few years back. It was very brief, but that’s a story for another time.

Greg: We personally love the Cockpit Premium, what are some of your favorite Einszett product and why?

Michael: I do love Cockpit but Glanz Wax and Ultra Gel Chain Grease have always been my favorites. Ultra Gel goes on my garage door chain drive, my mountain bike and door hinges. It’s the best grease I ever used. I also use W99 a lot. I dilute it in various mixtures and use it around the house to clean the kitchen, my grill, my car, concrete, etc. It’s actually our number one seller in Europe.

Greg: Any new or exciting products from Einszett in the works?

Michael: We are working on some new products in the professional line which will eventually work its way down to the consumer line, as is usually the case. As I mentioned earlier, we have a lot of products that we haven’t introduced into the North American market yet. We are considering a few products to introduce in the coming year. We have to make sure they meet VOC regulations here in North America and once we get an all clear on that, we might ask some of the community to test the product or products for us before they’re released.

We hope you enjoyed this article and if you have any questions or concerns please do not hesitate to leave them below! 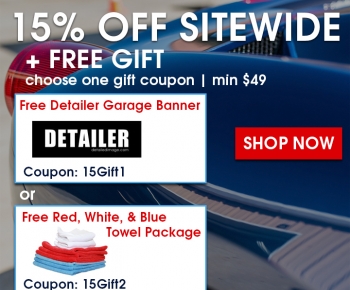