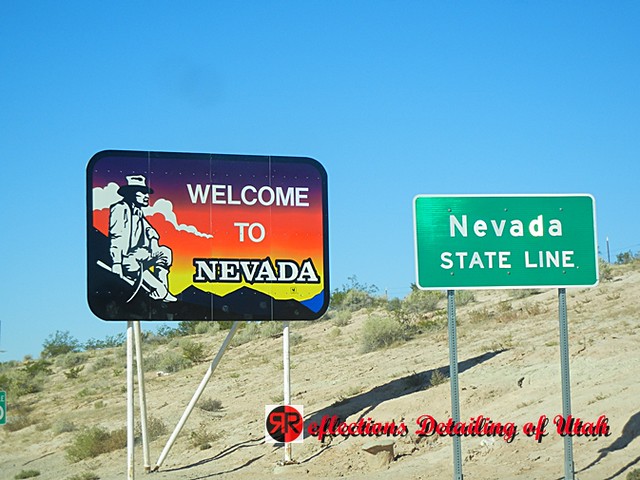 I cannot believe it’s been another year, time is flying by like a Ariel Atom on the front stretch of Millers Motorsports long layout!

On my drive home, 7 hrs to be exact, I was thinking about new articles for this winter. The winter here in Utah really slows down the extreme detailing, which is fine as I spend time with the family skiing on the weekends. I digress……… This year was a pretty amazing year with a ton of detailers converging, cool cars, working for top tier owners that I would give a brief showing of what I did.

Here I am making use of the open roads and 80 MPH speed zones……..no I’m not speeding I have non spec tires on the car :)~ 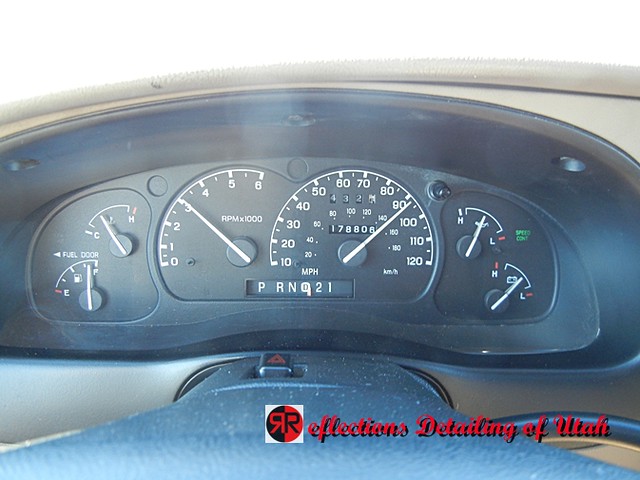 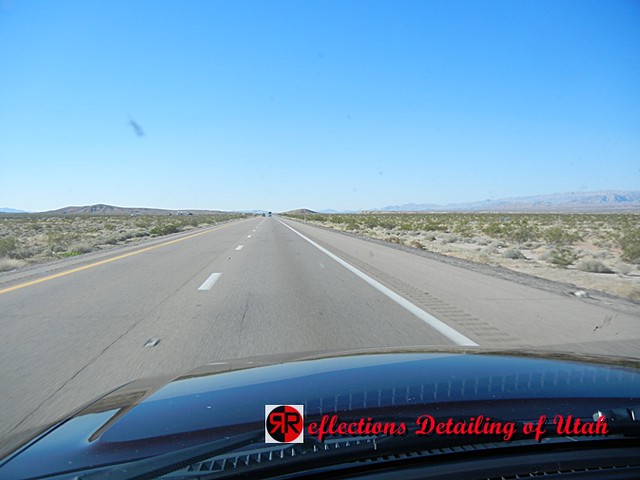 I was again hired by the Ford Motor Company and Meguiar’s to prep, maintain, and clean 50 cars in their booth.  I arrived on Sunday before the show and meet with the team of detailers it was going to take for this HUGE task.  Derek Bemiss, Nick Chapman, Kevin Brown, Myself (yes I meet myself), and Ryan Sunok were the team for this year, with Derek as our fearless leader.  The cars vary from rough shape to not too bad, and each year they seem to come in rougher shape than the previous.  The reasons range from they just came from the paint booth less than 24hrs before, to they were just on the Salt Flats in Utah setting records.  When a paint booth job is rushed the task of “buffing” the car is rushed and so we have to try and clean up the rough hurried work to the best level we can with the time we have.  The team is composed of very skilled detailers so I assume is flattery that they trust us to dial in the cars and know we will!!!!  All the cars have to be prepped and ready to go by Tuesday morning!  We can’t get the cars prepped until they are staged on the floor, and Ford is pretty good about giving us the cars in a timely fashion.

Here is the final booth set up 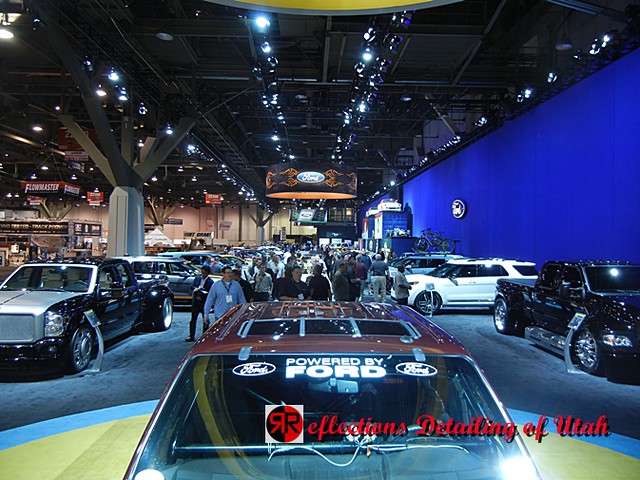 I got to work on the original AC Cobra owned by Carrol Shelby…..estimated value $23,000,000.  The goal was to keep it clean without messing anything up! 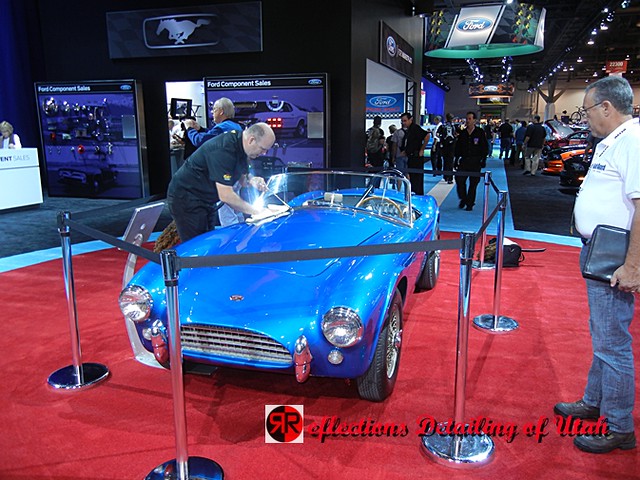 There is an amazing car builder named Dan Web of DAN WEB AUTOMOTIVE ART and he does some crazy detailed work.  You can search Dan Web Automotive for more about the cars he builds. 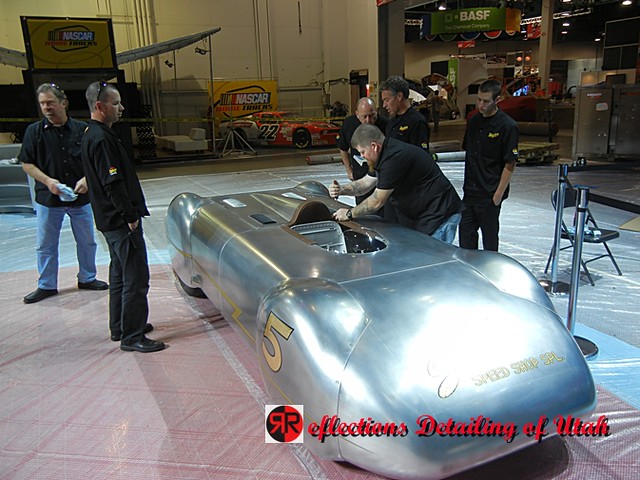 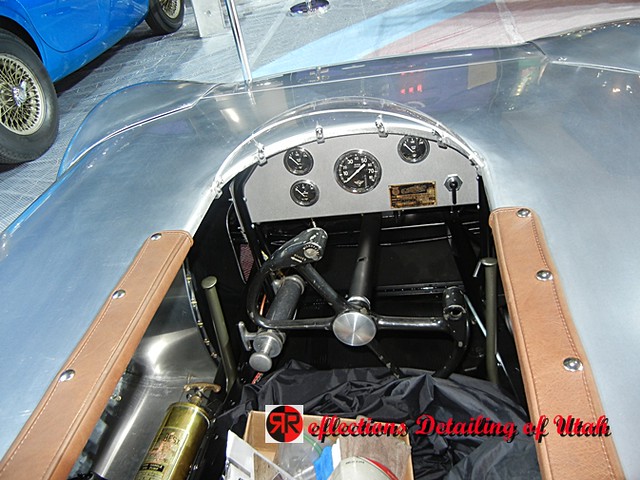 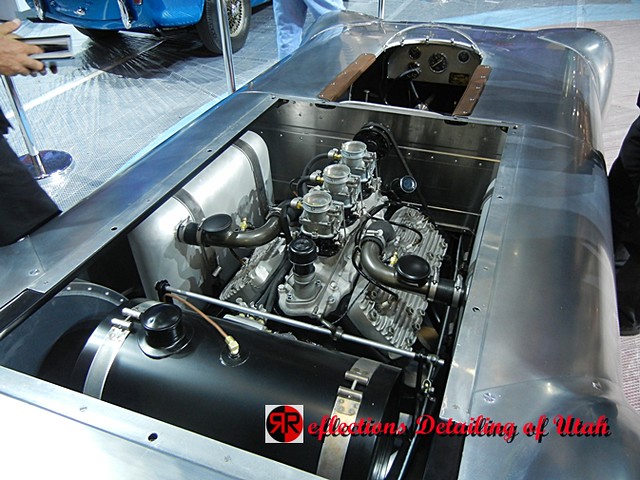 We busted our butts on Sunday till about 10pm to get a head of the process, so when Monday rolled around we finished early.  Once Ford says we are “done” for the day we can try and drum up side jobs.  Now mind you Monday was Halloween, I’m tired, but eager to freelance some work at SEMA.  As we are walking around we spot a guy hand polishing out a pretty rare car, it’s at the BASF  booth……….it’s Chip Foose!  We ask if he needs any help and he is floored we would help……duh we would love to help Chip Foose!  He came in just to dress the tires and noticed there were some paint flaws in the bright light, small sanding scratches and he wanted them gone…..not having a full set of tools to fix the finish he was hand polishing out this car the best he could!  We worked on this Mercedes Benz 300SL gull-wing till about midnight and Chip Foose worked right along side of us the entire time, he kept asking “give me something to do”  he is truly a humble and talented person.  So when we finished he took us to “dinner” at 12:30am and we asked all the questions we wanted and had a great visit with a legend in the automotive world.  I hear that Overhaulin’ is coming back!

Here is the famed Kevin Brown working the hood of this beauty!  Nick Chapmans head is also shown….LOL 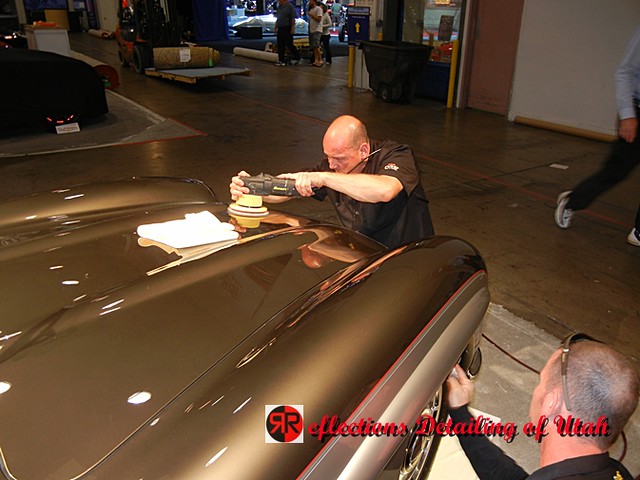 Ryan Sunok and Derek Bemiss working the hips and back side of this car……..I forget the name of the guy in the blue shirt…..Oh yeah that is Chip something or other 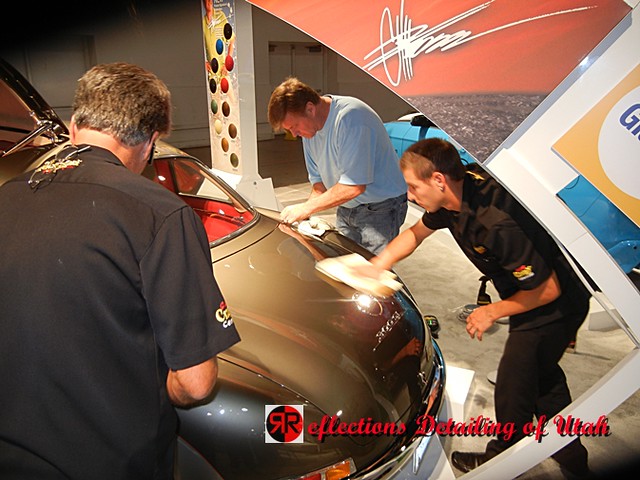 The gloss is increasing and imperfections are coming out…..I got the luxury job of hand polishing out the top vents in the photo…..they took close to an hour to do! 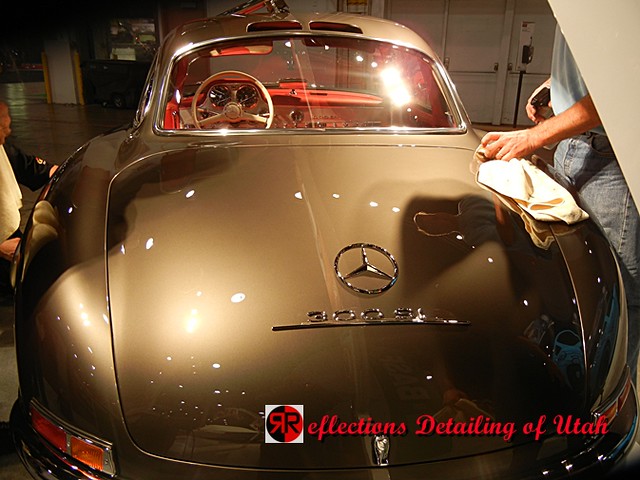 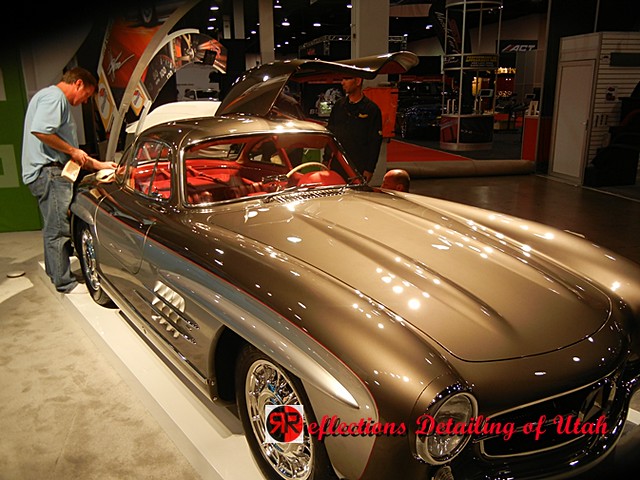 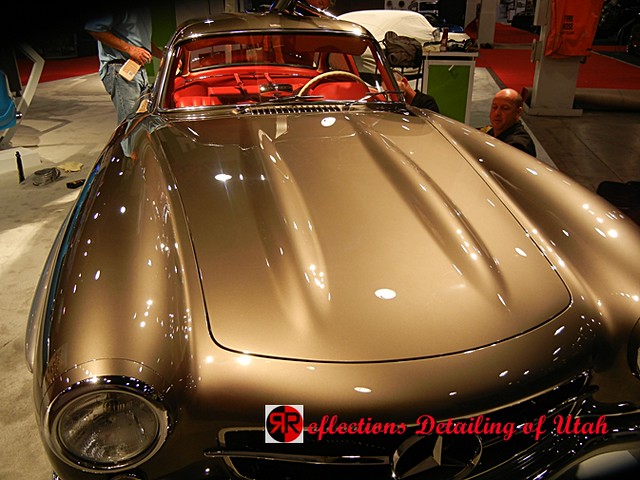 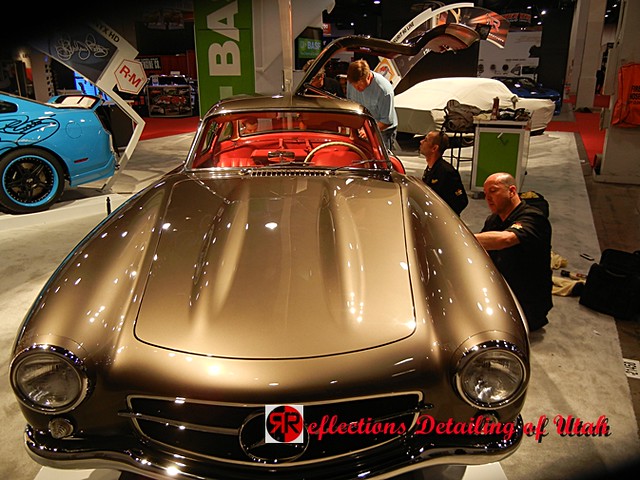 While I caught Chip Foose standing in this photo he worked every moment we were working, a true artist but equal in work ethic! 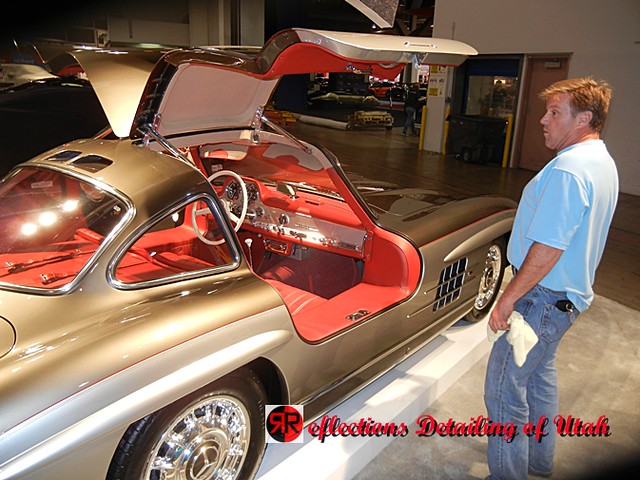 It’s now nearly 1am on Halloween Night, we are being told its time to leave the building.  We finished with about 10 min to spare.

Chip Foose and the Meguiar’s Detailing team!  What an honor to be allowed to work with him on this project and thank him for the trust! 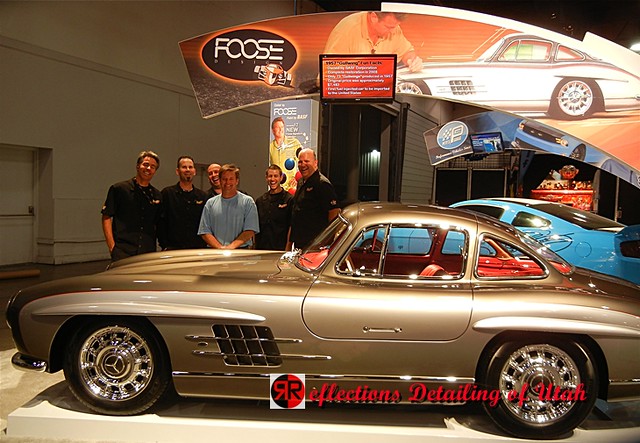 I got to hang out with many other noted detailers in the USA and overseas at various events during the week……photos were limited as I was networking not a photographer on this trip.

I’m excited for next year and hope to see you there! 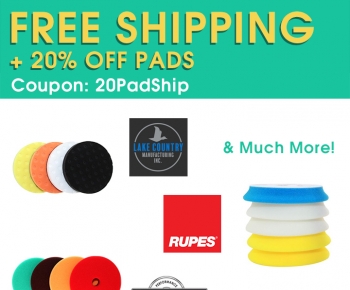