In this video, we took a heavy scratched metallic black Jaguar F-Type and eliminated heavy swirls and scratches using Menzerna Heavy Cut 400. This versatile compound produces outstanding cutting ability while also leaving a refined finish. Low dusting and a long working time make this compound a stand out in any detailing cabinet.

Menzerna Heavy Cut Compound 400 (Formerly known as Fast Gloss Compound FG 400) is a game changing polish that is finally available to the US markets. This product has been wildly popular throughout Europe and it’s now finally available for professional detailers and enthusiasts alike. You can use this product to remove medium to heavy imperfections (swirls, fine scratches, heavy oxidation, watermarks, etc.) while simultaneously leaving behind a high gloss finish! In one use you’ll instantly notice how quickly and effectively you’re removing imperfections while expending less energy in less time.

(00:00):
Hey guys, James here with Detailed Image. And today we’re going to talk about how to compound black paint black paint when it looks right. It is everyone’s absolute favorite color, but when they’re swirls and scratches, you sometimes want to just pull your hair out. So what we’re going to talk a little bit about today is the compounding process, right? That is kind of the initial polishing step, the step that removes the defects, right? Kind of scrapes away that layer of paint, or it scrapes is maybe a bad term, but abraids the surface and kind of, you’re basically what you’re doing is you’re removing a microscopic layer of clear coat to the point where there’s now no defects. And the product I kind of wanted to showcase today is Menzerna’s Heavy Cut Compound 400 one of their kind of flagship compounds previously, it was under the name FG 400, which I know many of you have used and loved.

(00:56):
So just renamed the same awesome performance. And the reason I wanted to kind of showcase this particular compound today was it’s a compound that I’ve used throughout my detailing career. It’s a compound that has low dust, heavy cut, but finishes down really, really nicely. So when I was kinda thinking about putting this video together, I was like, okay, what’s it. What’s going to be a good compound for the DIY. Someone who’s relatively inexperienced, but a, but on the same side, but on the other opposite, end of the spectrum, a compound that a professional is really going to enjoy and be like, wow, those are great results. Missouri has always been known for super high quality polishes. But this one in particular, I think for the compounding step is definitely something to look at. So what we’re kind of working on right now is this is a good client of mine.

(01:49):
This is a Jaguar F type ass metallic black paint. I would call this probably on the medium hardness level clear coat level. What I’m referring to is, you know, how aggressive do you have to get on the paint to remove that defect? And I would say we’re kind of right down the middle, or, you know, we’re, we’re not, it’s not a soft, clear coat. It’s not a super hard clear coat. It’s kind of right down the middle. So that’s kinda the first thing we’re thinking about. The second thing we’re going to do is we’re gonna do a, we’re gonna, we’ll get a nice little 50, 50 going. We’ll do a little pre pre correction wipe down with CarPro Eraser. And we’re going to get right into it. So let’s, let’s start let’s start with the tape. We’ve got a little CarPro red tape to have a nice little definitive 50/50, so we can see our correction rate.

(02:44):
So let’s do that. Yeah, we’ll go there. And I have always been getting in the habit more and more now, but over the last couple of years, I’ve gotten into the habit of always doing a pre correction wipe down. This is after your wash process, this is after the decontamination. So the car is clean. But it maybe, you know, you’ve, you did the wash and decontamination yesterday. There’s a little bit of dust on the car. Or maybe you just want to be certain, there’s just nothing left on that paint that could potentially throw another variable into our polishing. So I’ve, I’ve really liked it. I’ve gotten the habit of doing that and in something like a CarPro Eraser is going to be great, removing any residues that might be on that, on that paint work. And then boom, we’re going right into our, into our compounding step.

(03:34):
So as far as what we have, tool-wise we have a Mark II Rupes 15, we have a Meguiar’s Microfiber Cutting Pad, five inch. And what we’re going to do is we’re going to take our Heavy Compound 400. We are going to prime that face of that pad with microfiber pads in particular. I think priming is very important. And what that’s going to do is, so I have a decent amount of compound on the face of the pad. And I’m going to massage that compound into the fibers of the pad. And what that’s going to do is now coat every single one of these fibers in abrasive liquid. So it’s going to maximize our cutting ability for this particular pad. This, this is my absolute, go-to never fail cutting pad which is why I wanted to kind of pair this with this particular compound.

(04:36):
But by, by by priming it, you’re kind of you’re unleashing its potential. So after we’ve done the priming I like to add just typically maybe three additional dime sized drops. And then you’re, you’re ready to go. Again, like we’ve talked about on many compounding and polishing videos that your, your first initial step is to kind of tap, tap, tap, tap, tap, and kind of spread that compound around. I know we’ve kind of talked about that probably too much, but what this is going to do is gonna not have a giant slinging mess when you go in and start and start the machine. So let me get let’s, let’s bring you guys in we’re going to do it in initials compounding cycle. So what that means is crosshatched pattern one cycle. So we’ll do a, probably three or four passes. See the results, see the clarity make some adjustments if we need to, but I want to bring you guys right in so you can see exactly how this compound performs.

(06:24):
And like right off the bat, I’m seeing that it’s one of those compounds that does not leave an extreme haze to the paint. So the clarity from the compounding step is really, really, really good. I mean, yeah, I mean, is it, does it have some, some haze to it? Absolutely. Right. A black paint is going to be one of those paints. That’s going to showcase that, but from a compounding perspective, if you’re comparing it to other compounds it was super low dust. I mean, there’s almost there almost no dust a very, very mild haze. That’s going to be easily corrected with your finishing your, your, your ultra fine polishing step. And it eliminated, I would say 95% of the defects. So here, I mean, I guess when, you know, when, when I’ve been thinking about this compound, it’s a compound, that’s extremely versatile.

(07:22):
It’s a compound that on a, soft on a, on a, on a softer paint, you’re going to get a ton of defect, removal on a medium paint, a ton of defect removal, and on a hard paint, really nice defect removal while leaving a great finish on all of those paints. Obviously on a, on a black car and in something that’s relatively softer, there’s going to be some finishing steps that goes with it, but is this going, this is it totally easy two step correction, which is awesome. And on harder, lighter colored paints, you’re going to notice that you’re going to, you could pair this with a foam cutting pad, a foam polishing pad, and make this an awesome one step without a ton of cleanup. Cause it’s not dusting, it’s not making a huge mess. So versatility, the one word, I think that describes Heavy Cut Compound 400 really, really well. I’m going to take you guys in, I want you guys to see the 50/50 a little bit. But yeah, I think Menzerna really killed it on this one. Definitely something to have in your arsenal. For 1 steps for light correction jobs Menzerna Heavy Cut 400, check it out. Thanks guys. 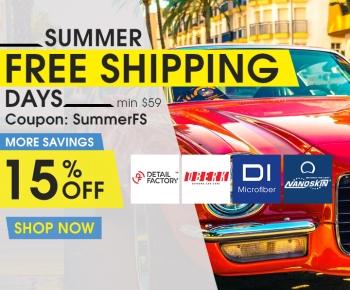