My goal for this video was to showcase the versatility of MC 2500. With this polish, you can make small variable changes that can produce different results. For example, this polish can be used as an outstanding 1 step polish with medium pressure, slow arm speed, and a foam polishing pad. MC 2500 can also be used as a more true finishing polish, with light pressure and an ultra-fine polishing pad—the same polish two different applications.

Menzerna MC 2500 will remove light to medium imperfections (swirls, fine scratches, oxidation, watermarks, etc.) in the paint while restoring a deep gloss to the paint. MC 2500 is suitable for both OEM and aftermarket applications and it is low-dusting, making for an extremely easy clean-up. The glossy surface helps provide an amazing reflection that can also be enhanced by adding a glaze, sealant or wax on top of it.

(00:00):
Hey guys, James here with Detailed Image today. I wanted to go over one step polishing, but specifically, I wanted to go over Menzerna’s Medium Cut Polish 2500. Now this particular polish is a great one step. Something that can be used on decently scratched paintwork to kind of really revive it. Not necessarily maybe remove everything, but make a huge difference. And at the same time, it can, it’s a polish that can be used as, as a finishing polish in a two step correction or a three step correction. It’s a polish that I’ve used over the years. It’s a polish. That again is super versatile a lot. I mean, if you guys remember the last video on the Heavy Cut Compound 400, this polish kind of fits into the next step, which would be to refine the finish and the two step. But what this video specifically is going to be all about is using it in a one-step.

(00:56):
What is a one step? Basically a one step is when you pick a dedicated polish, a dedicated pad on a machine and you try to get the best of both worlds. You try to get as much cuts or as much defect removal as you can while having good enough clarity to basically leave it alone. Have it be just in one step. So you’re not, you wouldn’t be going back and finishing it down and using more pads and more polishes. You’re trying to do it all in one, all in one go. So what I wanted to do is showcase a couple of things. Obviously here we have the paint, as it lies pretty swirled up, pretty scratched. Here, we’re going to do the one step. So we’re going to use on the Mark II Rupes 15. We have a Lake Country HDO Polishing Pad, and we’re going to do the medium cut polish with that.

(01:49):
And here I use the Heavy Cut Compound 400 first as a cutting step. And I’m going to show the fit the refining abilities, the polishing abilities of this of this polish as well in a two step correction. So we’re gonna kind of see it all unfold. We’re going to see it as a one step. And then as a, the refining step in a two step, it’s saying a lot of steps, but I hope you guys enjoy it. So let’s get right into it. I just use this I just did a polishing cycle with this, with this polish, so you can see how the pad is, is lightly used. What I’ve just done is cleaned this pad. So take a microfiber towel. Basically, hold it right here, run the machine, remove that polishing residue. So now we’re ready to go. What I’m going to do is I’m going to do about four dime size drops on this, on the pad here and I’m going to get right into it. So I’ve got my Scangrip for checking. Let’s go here. Let’s go. Tap, tap, tap, tap, tap.

(02:55):
Okay, so I’m going to polish this section here. We’re going to see what we can get out in this one step. And then I’m going to bring you guys in and show you kind of the, the whole the whole panel here and all the different all the different zones we get set up. So let’s get right into it. Take notes. So a couple of things about one steps because were trying to get as much cut as possible. I am using slower arm movement. I’m using more pressure. I’m trying to maximize the cutting ability while not, while still getting great clarity and still refining the finish nicely. So we’ll see what we get after this. I’m going to use decent pressure, really slow our movements, let that polish, let those diminishing of abrasives work and cutting through that paint. So let’s take a look.

(04:09):
Okay. So let’s bring it in. Let’s get our removal cloth. One of my absolute favorite towels, The Rag Company Edgeless 300. Awesome, awesome. polish removal cloth. So let’s see, first off, you know, when I was using it really liked the work time I probably did about four cross hatch patterns, pretty darn heavy pressure. Really, really, really slow our movements. And we’re working on a paint that’s probably right down the middle. So if you guys remember the compounding video this is that same Jaguar and this particular paint is right down the middle. So it’s, it’s not super soft, not super hard. So it’s a good, I think it’s a good candidate for a one-step. So what I’m seeing right out of the gate is really, really nice clarity. So no haze to it, very, very nice gloss but a couple of rids, right?

(05:08):
A couple of random, deeper scratches in that’s totally to be expected, right. From a one step. You know, there’s always going to be the compromise. There’s always going to be a couple things left over, but overall, a really, really nice finish and great defect removal. If we, I mean, you guys will see exactly what I’m talking about. But just really, really nice finish for a one step and great defect removal. I mean, from a panel that was absolutely swirled up. I mean, we probably have maybe one or two rids leftover that are going to be very, very difficult to see. And that’s where a polish, like this comes, comes into play, as it gives you options. It gives the client options. Not every client is going to want a multistage paint correction, but does this work in one? Absolutely. You know, sometimes, you know, a particular car is going to call for a one and that’s where a product like this is going to excel.

(06:01):
You’re going to blow away the client, get tons of defect, removal, and be able to reduce the time in which it takes. It takes to accomplish the job, same thing for enthusiasts. You know, if you’re just starting out and you’re like, okay, I want to just, I need one polish. You know, there’s a thousand, you know, where do I go? What do I start? You know, this is not a bad start, right? This is, you could learn a lot about correction with a polish like this. So just wanted to highlight, you know, the Menzerna Medium Cut 2500 a little bit as a one step again. I so appreciate you guys watching. If you have any questions, let us know comment below and we’ll see you guys next time. 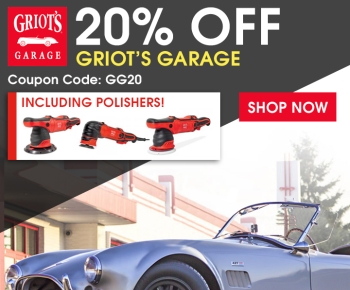