A few months ago, I had decided to replace my existing high pressure wash system in my home detailing studio. I wanted a system that was wall mountable or easy to store, not too bulky or cumbersome, give me at least 1000 psi and make my washing process more efficient.  After doing some searching online, I came across the Comet Static 1700 High Pressure Washer System. This system certainly checked a lot of boxes for me and so I decided to give this system a try. So for those considering one of these systems, here is my experience with the Comet Static 1700 High Pressure Washer System.

Founded in 1959 in Italy, Comet S.p.A has manufactured products for agricultural, cleaning services and industrial applications. Comet is a brand that is relatively new to the detailing world on these shores. Only in the last 3 years or so have they started to begin showing up on the detailing scene.

Upon receiving the Comet Static, I was surprised to see how much smaller the box was from what I had imagined. Everything was certainly packed safely and done very well to avoid damage during shipping. Other than a lead in hose, the system comes with everything necessary to start using the pressure system right out of the box.

As pictured below, these are all of the components included in the box. 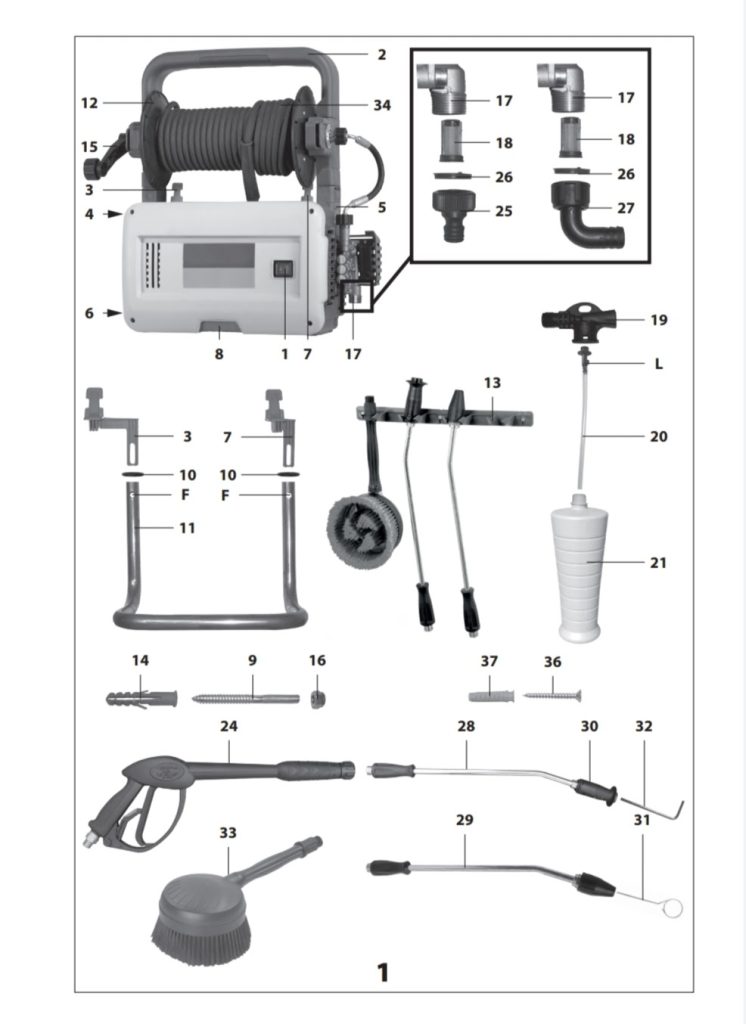 Some Modifications Required and Installation

During my research on the Comet Static online, I quickly recognized a consensus among the detailers that were using this system. The one thing they all had in common was that no one was using the system as it comes out of the box. Everyone had modified the system in various ways. Before receiving the system, I thought to myself “how bad could the stuff that comes with it possibly be?” and when I did see it first hand upon receiving mine, I knew exactly why.

The system comes with some pretty strange attachments, super long lances and a foam cannon that was stranger still. For those of us used to using our favorite foam cannons, guns and attachments, the Comet Static equipment certainly will not do. In my opinion, the lances were way too long for my needs and changing out the attachments was not very efficient. The foam cannon that comes with it was simply not up to par to what you get in something like an MTM Hydro PF22 for example. Luckily, the Comet Static 1700 lends itself to making it your own with your favorite gear.

Before getting into the fun stuff, it was onto mounting and hooking up the water supply and electrical. The Comet Static washer does come with the inlet fittings but does not come with a lead in water supply hose. So this will be something you will need to acquire to supply water to the Comet Static. This system does come wired and corded to plug into an outlet, which makes it very easy to setup in that regard. This system is designed to be wall mounted and easily removed from the wall to use in mobile applications. However, a 90 degree fitting at the inlet hose will be required if you are planning to take this system on the go as it does not stand well without a 90 degree elbow fitting. For me, the system was going to stay wall mounted, so I was able to use the fitting equipped from Comet. 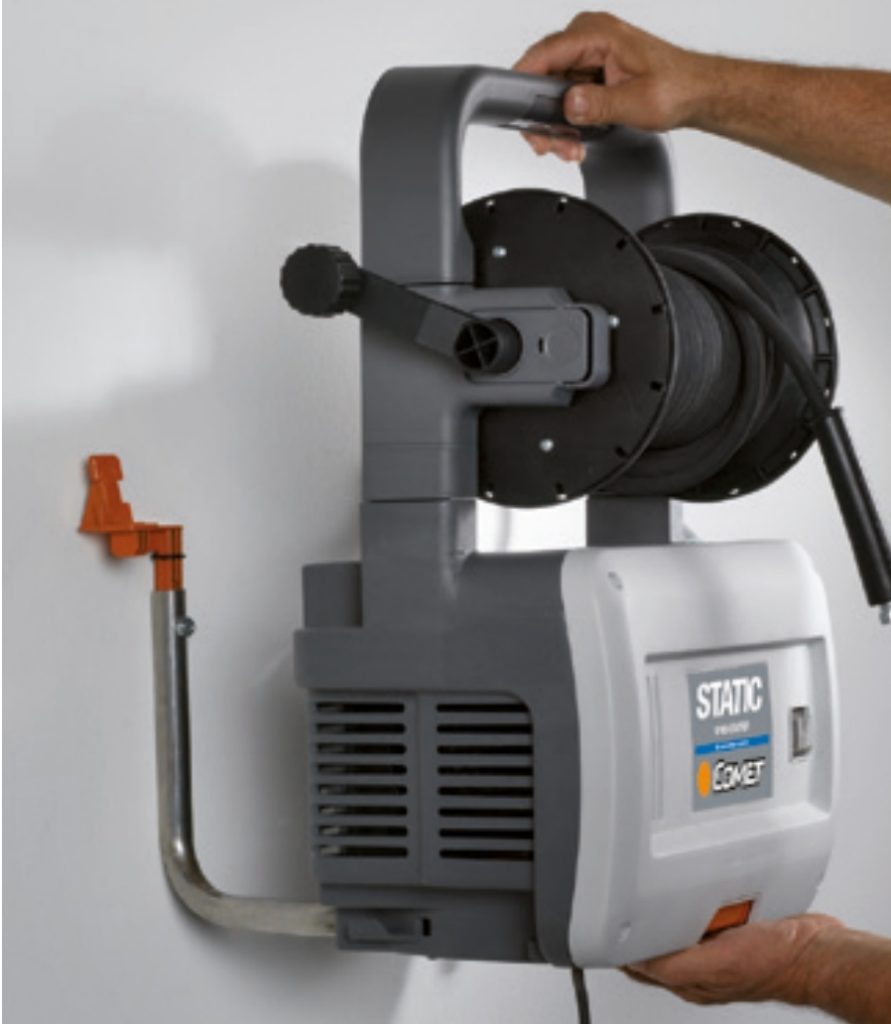 When it came to mounting the Comet Static 1700 onto the wall in my detail studio, it did not go as simple as I thought it would go. As you can see from the picture above, the system slides onto a metal bracket and then is secured up top by two orange plastic clips and another at the bottom of the unit itself. That wasn’t the issue during installation, the issue was the hardware included to mount the bracket to the wall. According to the instructions, the mounting of the bracket onto the drywall seemed pretty straightforward. Let me tell you, it was anything but.

The hardware for mounting is your traditional plastic drywall anchor and a unique double sided threaded bolt. How these two bolts and anchors were to hold this unit up on a wall is beyond me. The hardware was inadequate to properly hold the bracket securely onto the wall, let alone with the weight of the unit mounted. The unique bolts supplied spun and made it difficult to properly secure the system at the top two clips. Once I managed to clip everything, the mounting was sketchy at best. The bracket was not flush and the anchors were coming off the wall. This was very frustrating and there was no way that I was going to leave in on the wall like that. 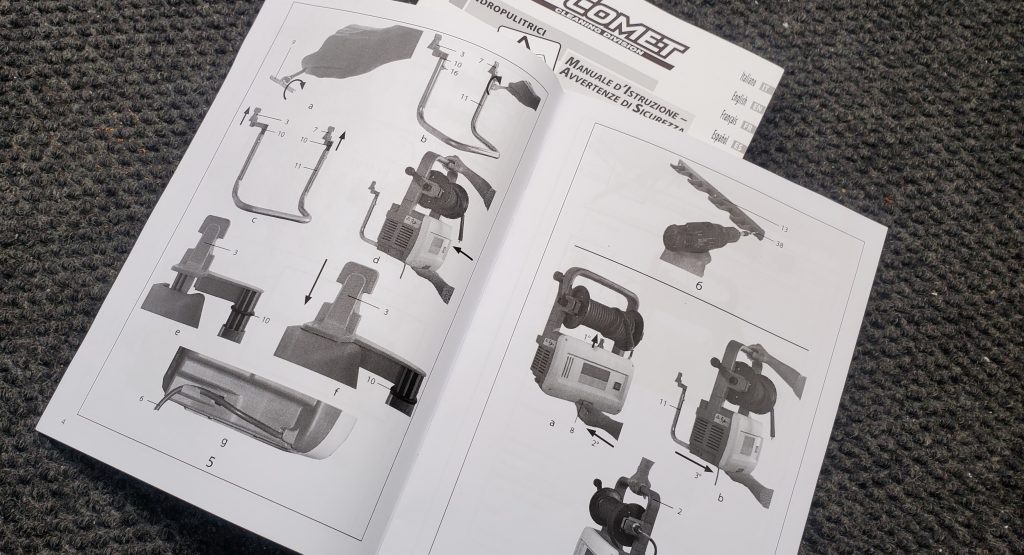 I took the unit off the bracket and the next day I went to my nearest home improvement store to find a solution. Once there, I also purchased the fittings that I would also need to use a different gun and attachments. For anyone looking to purchase one of these units and mount it on a wall, I highly recommend picking up some heavy duty toggle bolts and ditch the supplied hardware. Pictured below are the toggle bolts I used to mount the bracket. This time it was secure and everything clicked and snapped in properly. The Comet Static system is pretty heavy and leaving things to chance with the supplied anchors is risky. Do yourself a favor and get some toggle bolts!

Making the Comet Static System Your Own 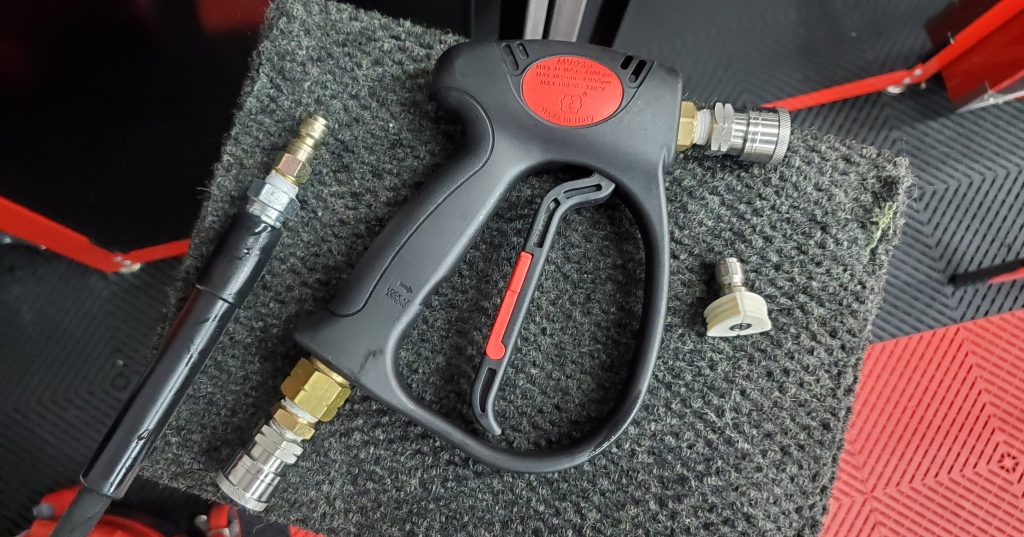 The Comet Static 1700 System comes with 65 feet (20m) of high pressure hose on its handy hose reel. It was quickly apparent to me that I was going to forgo using the supplied gun, lances and foam cannon. I also knew that quick disconnects were also going to be part of my setup with this system. This would make it fast and easy to switch nozzles, add a foam cannon or other attachments I currently use.

Of course, these fittings can be found at a local supplier or home improvement center. You can go completely stainless if you wish, I simply went with what was readily available. After 15 years in the carwash industry and countless gun setups I’ve put together during those years, I have always been partial to a brass and stainless set up. Once I was ready to give the gun its first squeeze to check for leaks, everything was leak free and ready to go. The last thing was mounting the supplied gun and accessories holder.

Here are some of the features of the Comet Static 1700 Blue Series High Pressure Washer System.

I’ve been using my Comet Static for a few months and its been great! Washing in my detail studio has been much more efficient and easier with the Comet Static. The unit gives plenty of high pressure and rolling up the hose is easy. I do suggest turning off the unit and releasing the pressure to make rolling up the hose that much easier. The unit is a bit louder than what I was previously using, but not unbearably loud.

The Comet is not without its quirks and that is mainly due to how it comes setup from the factory with its included attachments and gun. Its not surprising as to why so many have made modifications to their Comet system. All things considered, the Comet has it where it counts. For me, It’s been great using my favorite foam cannon and being able to attach it easy with disconnects. I use a different gun than the one supplied and have the ability to change nozzle tips. My clients are always intrigued by the Comet Static hanging in my studio and have commented on how great it looks.

These units are selling for around the $600 USD price range. Don’t be surprised to find some selling for over $800 online as some of these units come with upgraded guns, foam cannons and the necessary fittings to make the modifications. I was able to modify mine for around $100 since I already owned a foam cannon and high pressure tips. But if you are in the market for a high pressure washer system with enough hose to reach down to the end of most driveways, with a slim design, wall mountable and plenty of high pressure, then the Comet Static 1700 high pressure washer might be the one for you.