You might be thinking this looks like any other 911 C2S on the road, what makes it so special?  Well, this one belongs to my dad!  He purchased this car last year to celebrate his retirement, and man does he love it (and so do I)!

Our goal with this job was simple – clean it up and apply lots of protection.  At the end of the day, this car is going to be driven and enjoyed to the fullest extent, so taking the time to make the exterior 99.9% flawless would really end up being time wasted as we understand it will need polishing from time to time in the future.  Silver is a very forgiving color to begin with, so we decided to stick to a one-step paint correction plan to boost the gloss and then apply multiple layers of protection with long-term coatings to make maintenance cleaning easier.  Due to my work schedule, this project would be broken up into several stages and tackled over the course of several evenings.  A full list of all of the products used in this job, including links, will be provided at the very end of this article for your convenience. 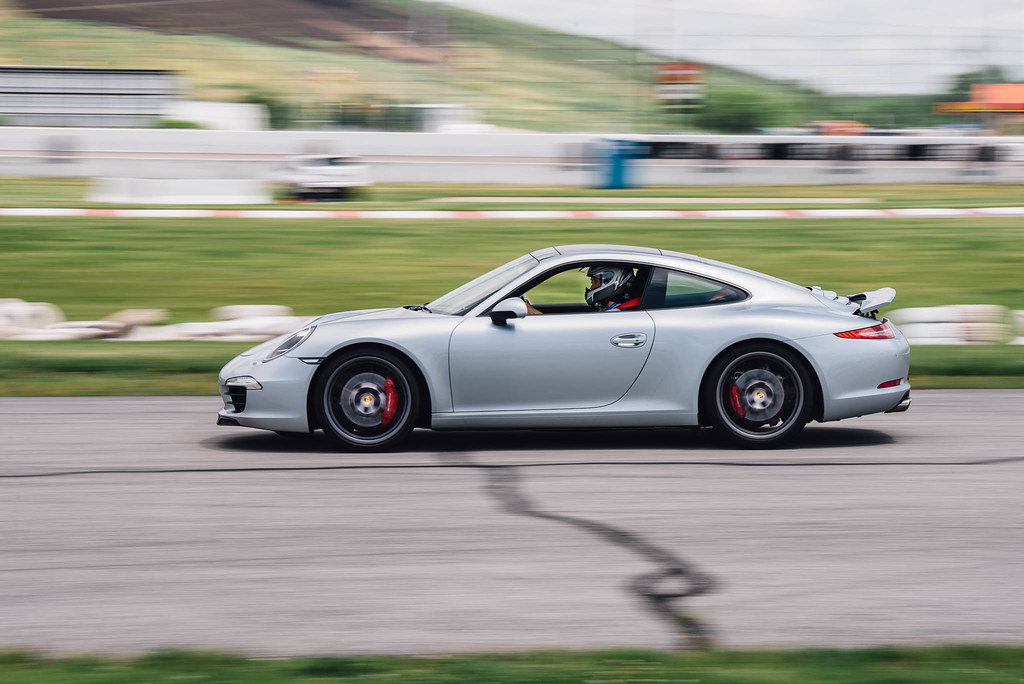 The vehicle was washed recently and has been stored beneath a car cover, but because it was driven a short distance to my house it still needed a quick rinseless wash.  While the car was wet, the speedy prep towel was used to remove any bonded particles from the surface.  Since the car had been to the track two weeks prior, there were plenty of tar and rubber deposits on the paint that needed to be tended to as well.  The vehicle had been ceramic coated by the previous owner, and while the hydrophobic properties had diminished, the paint had surprisingly little bonded contaminants to remove aside from the previously mentioned track day rubber. 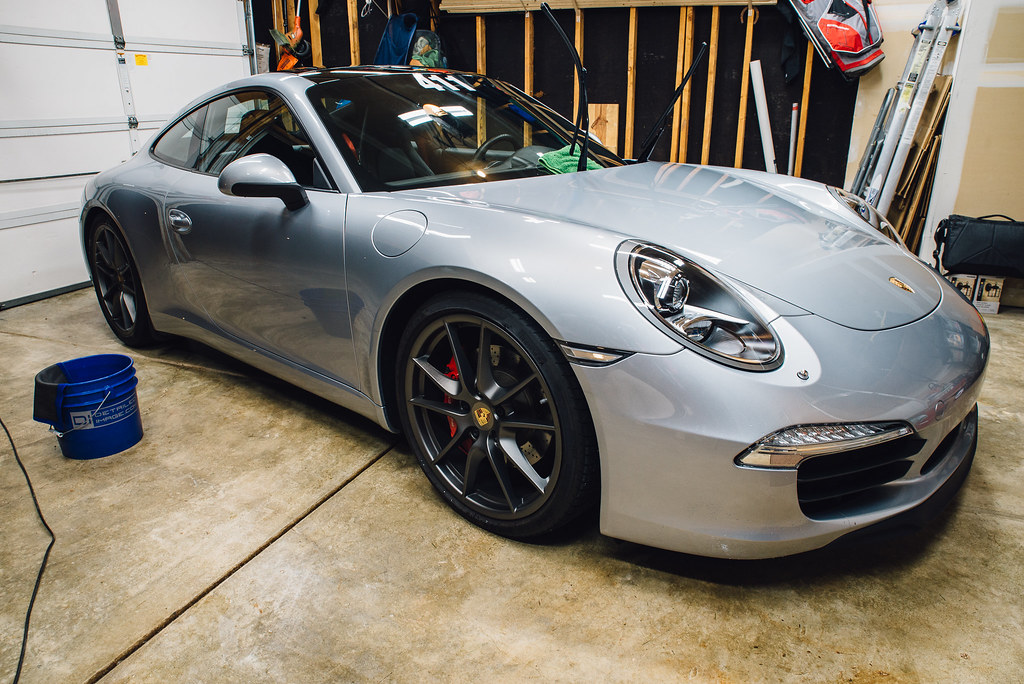 With the paint perfectly clean, it was time for the inspection.  This was the first time I have had the chance to really take a close look at the paint, and as expected it was very difficult to spot anything on this highly metallic silver paintwork.  With all overhead lights turned off and a single spotlight turned on and positioned at just the right angle, defects became more visible.  There was general swirl marks and blemishes, but nothing too significant. 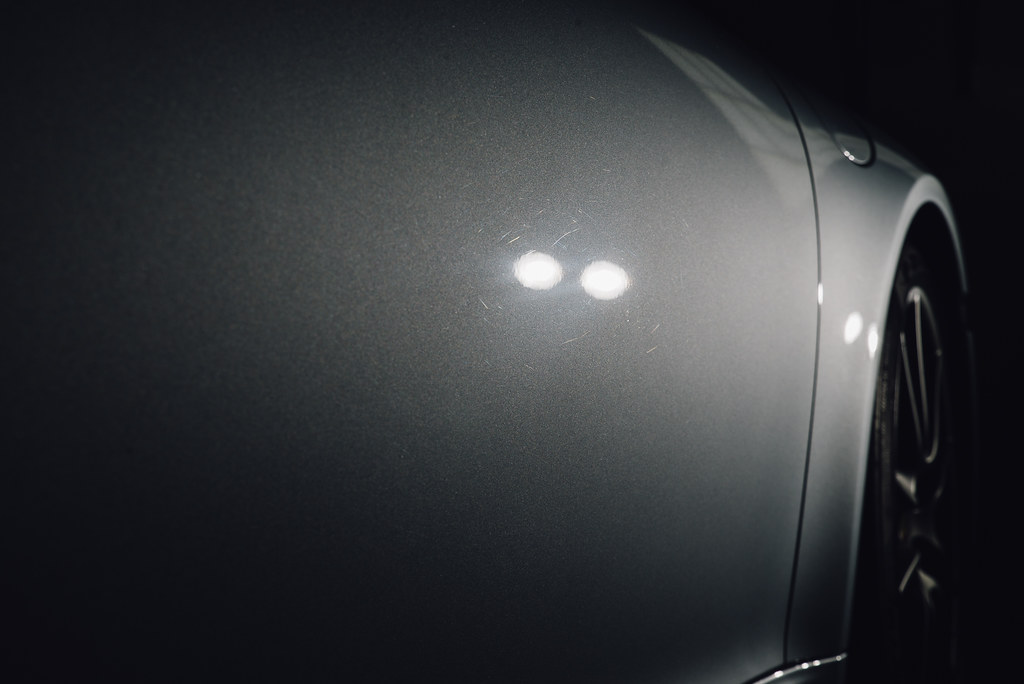 My previous experience with silver Porsches would lead me to assume that this paint would be quite resistant to correction, however I like to practice what I preach and start with the least aggressive approach and work my way up as needed.  I began my testing with a very mild combination of Meguiar’s M205 on a Griot’s Garage Perfecting Pad.  As I expected, this had little to no effect on defect removal, but the haziness had been cleared up. 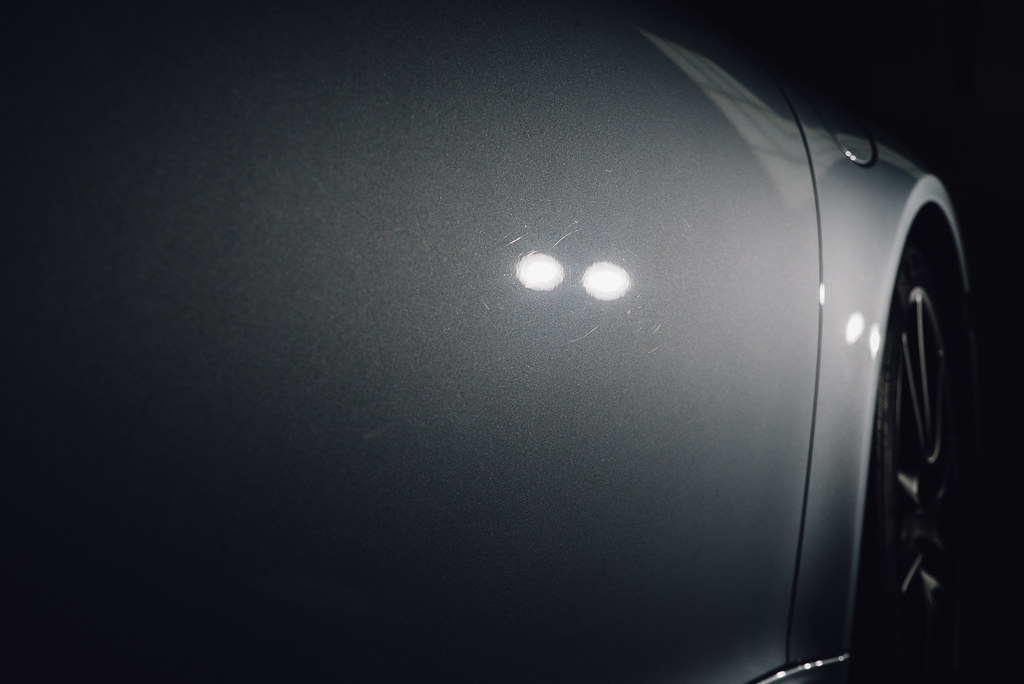 Taking baby steps, I then tried M205 on a Griot’s Garage Correcting Pad.  Again poor results.  I then kicked it up to M100 on a Correcting Pad.  This showed signs of improvement so I knew I was getting close. 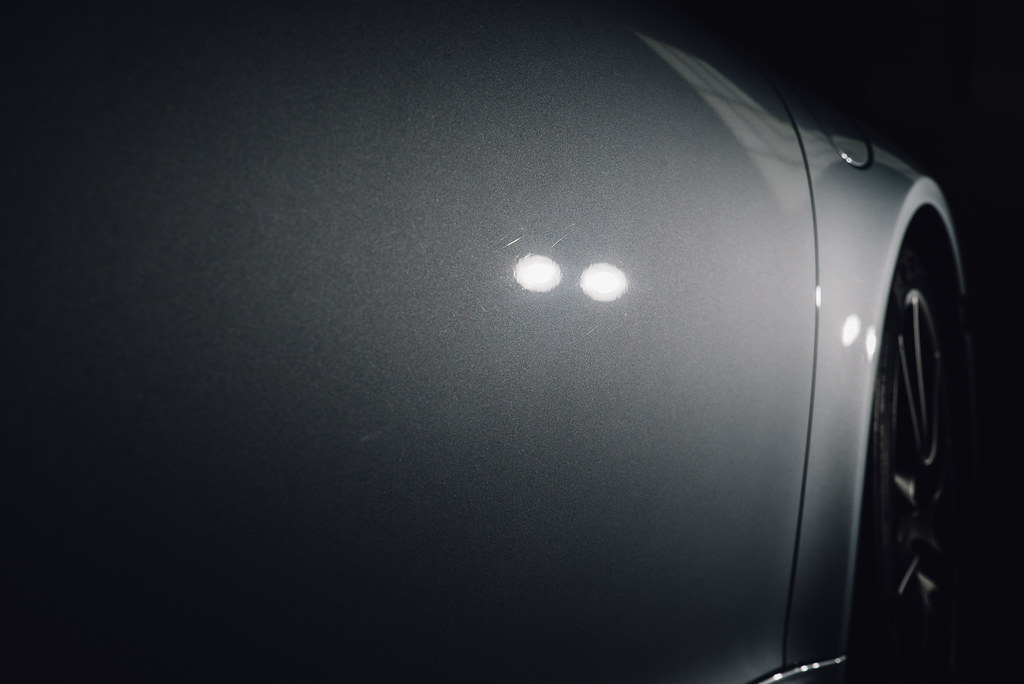 I slapped on a microfiber cutting disc and applied some M100, made my passes and finally saw the results I was after.  This fits with my past experience as all other silver Porsches that I have worked on have been quite hard and have required similar levels of cutting to create even the most minute improvements.  The finish showed no signs of marring so I had successfully determined my one-step correction process. 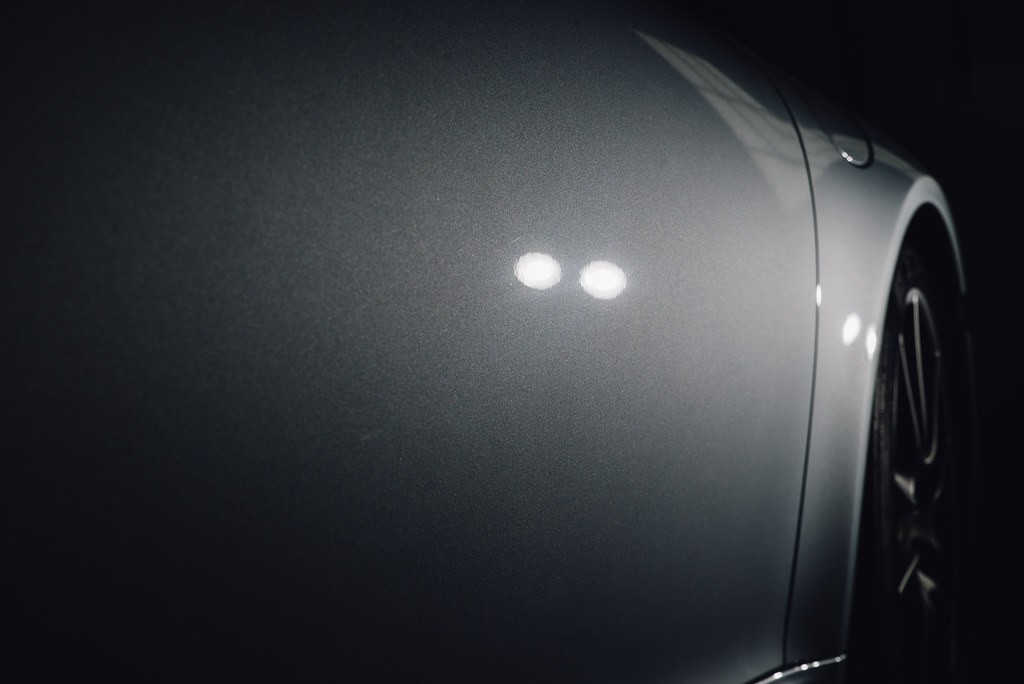 Another before and after comparison to validate my test spot findings. 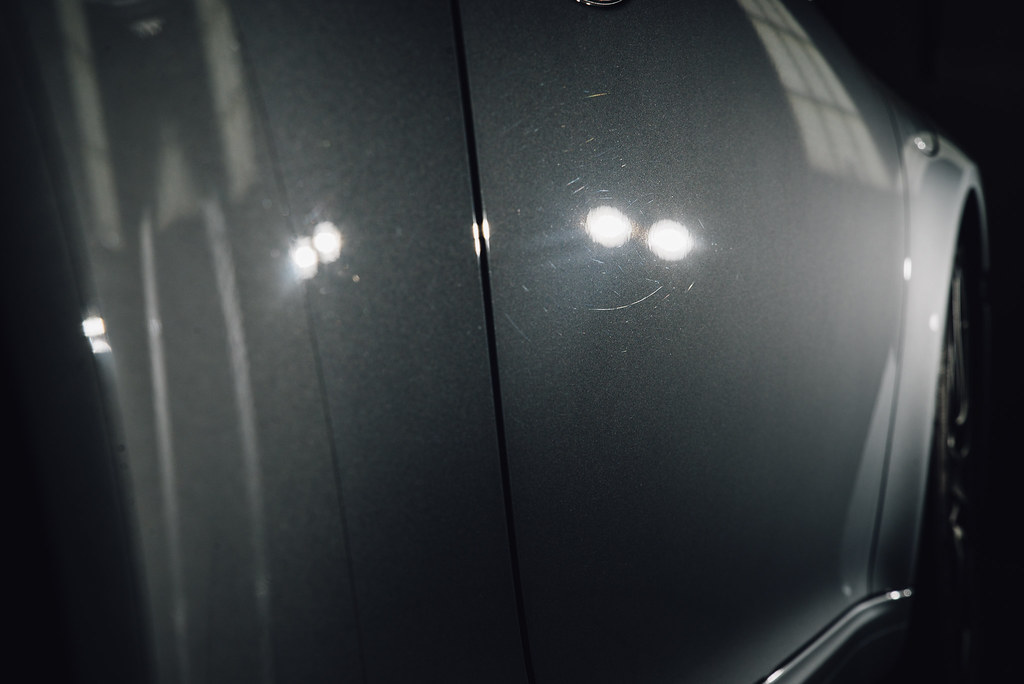 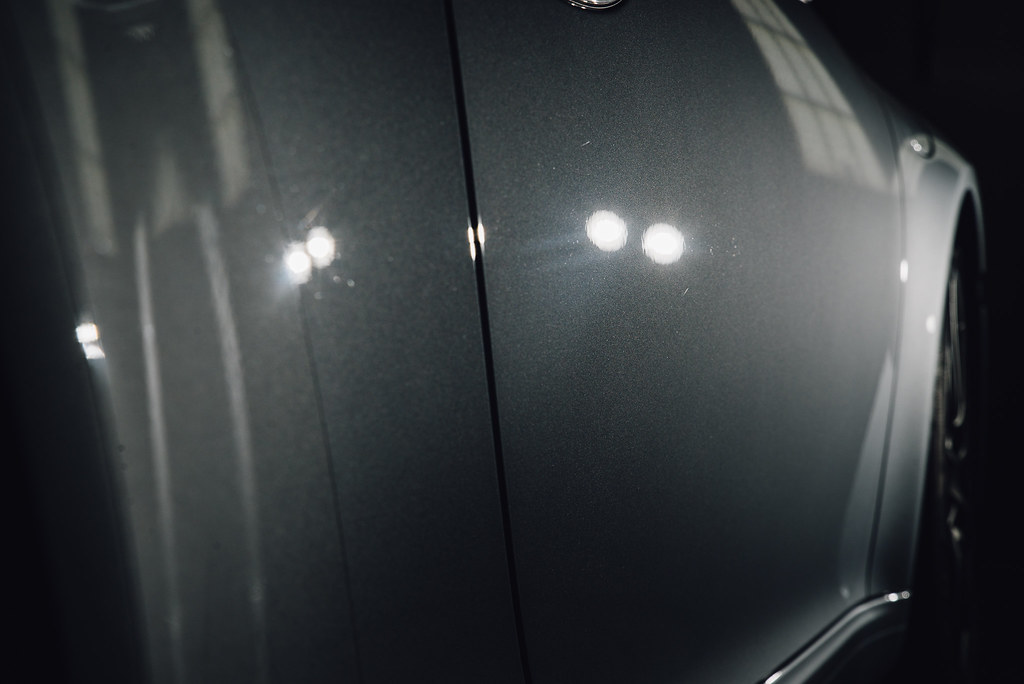 The roof is made up primarily of glass, however there are black plastic sections at the front and rear of the large moon roof.  Just like the piano black b-pillars found on many vehicles, these black roof panels were completely hammered. 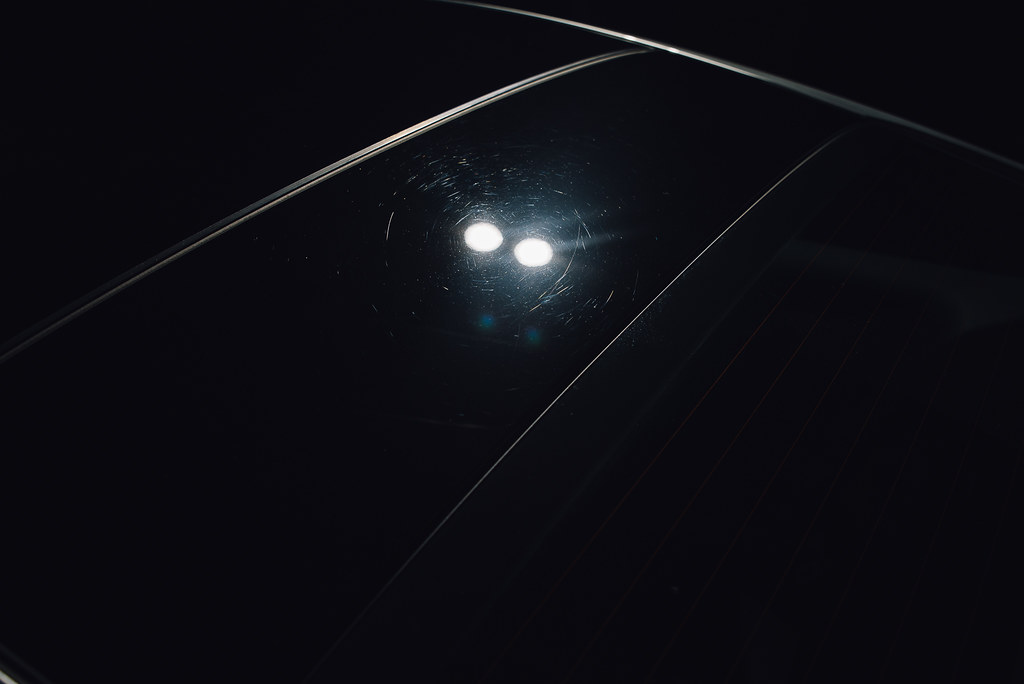 Compounding made a significant difference, but there were still many deeper defects that remained.  A polishing step was done later to refine the marring seen below. 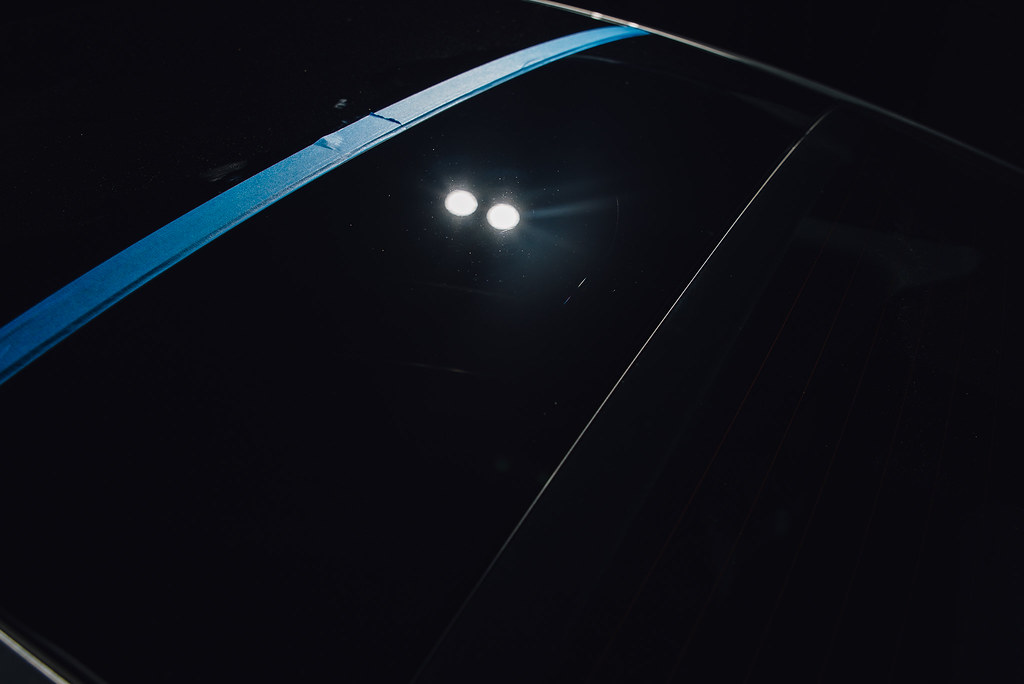 My favorite feature of these cars is the “hips”.  The signature curvature of the rear quarter panels make it impossible to mistake a 911 on the road. 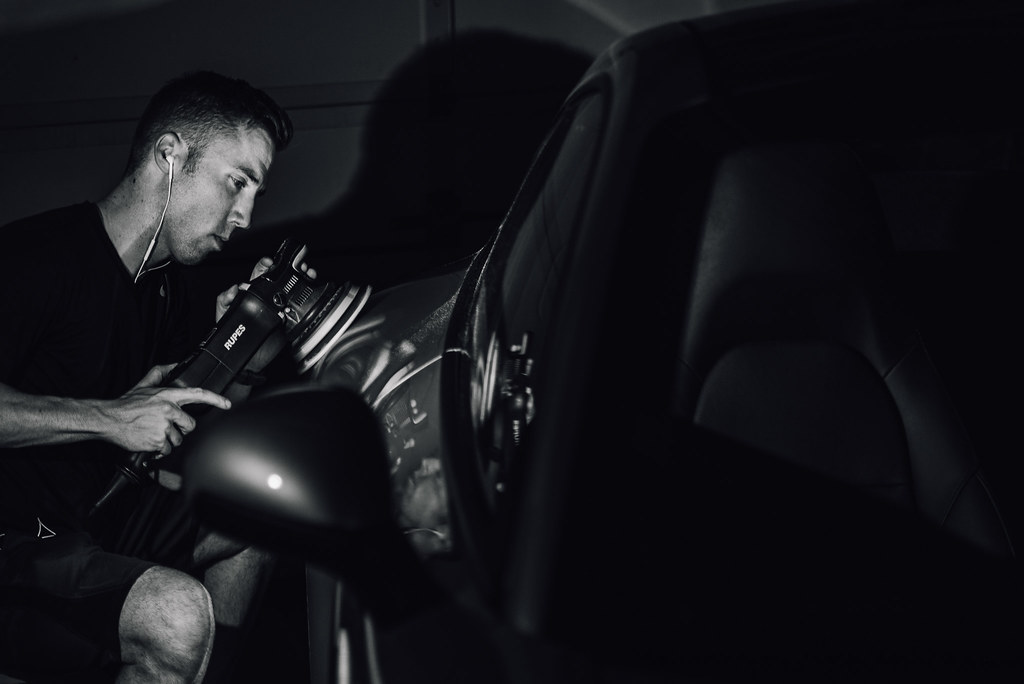 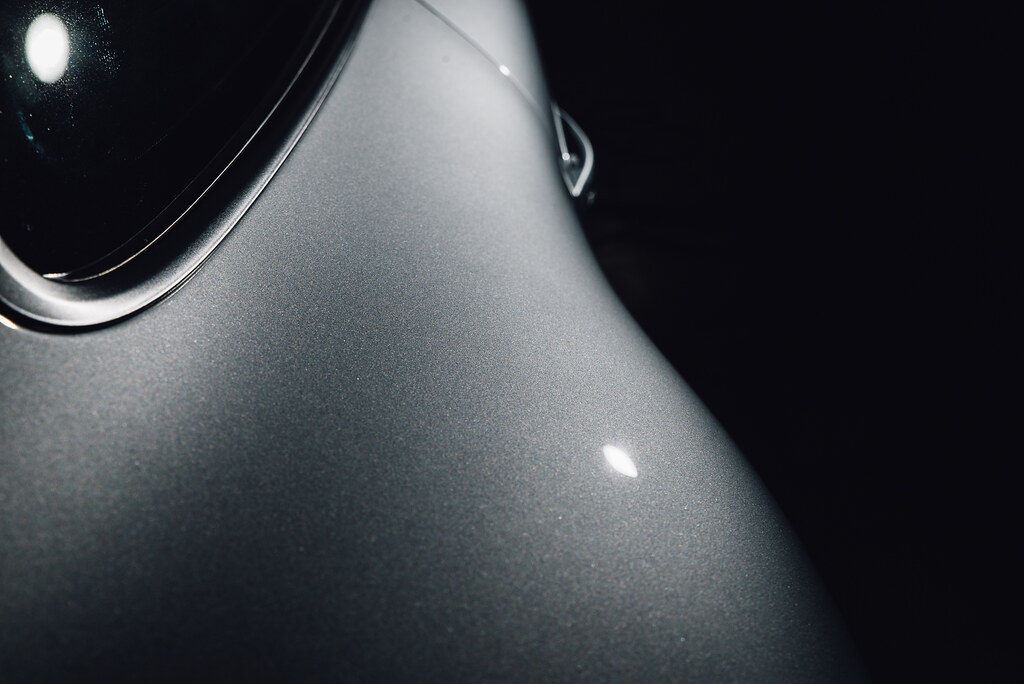 The tail lights told the real story as to how the vehicle had been maintained. 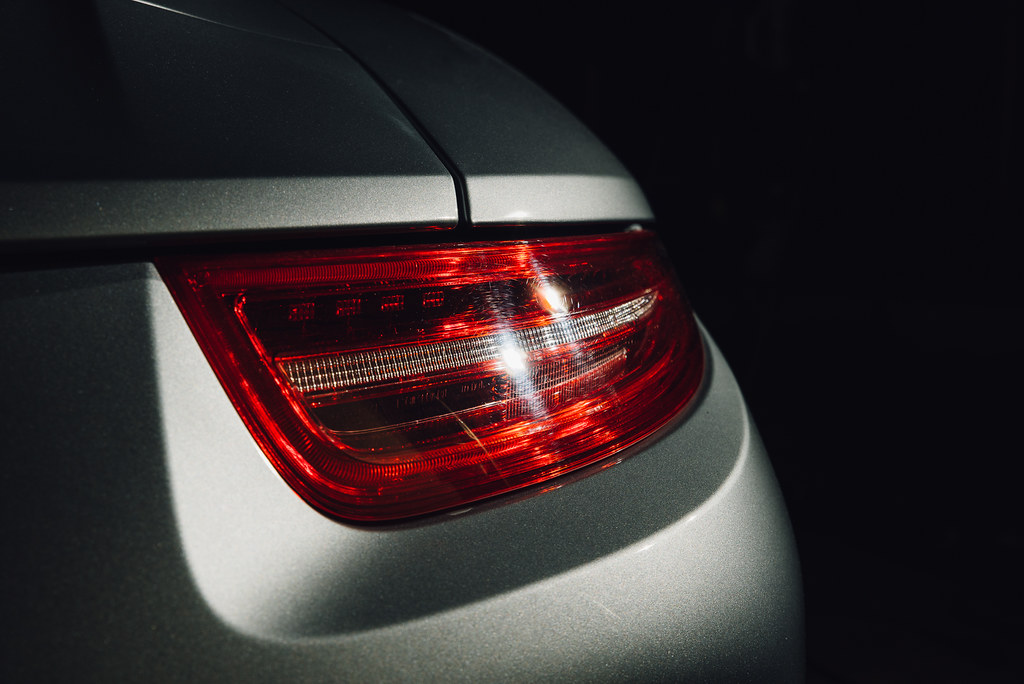 Improvements were made to both lenses, however I struggled to remove the marring left on these lenses. 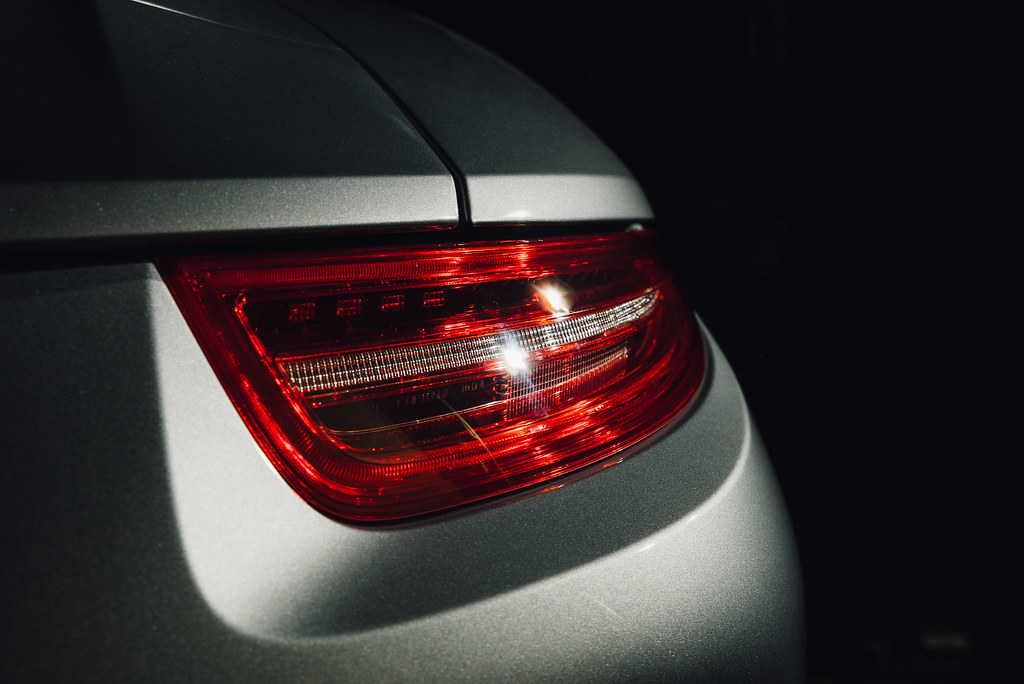 The paintwork was then wiped down with Gyeon Prep which is a specially formulated blend of isopropyl alcohol and surfactants that remove any residual polishing oils or residue from the surface.  This is a vital part of preparing the paint for a paint coating.  Two coats of Gyeon Mohs were then applied at one hour intervals followed by a single layer of Gyeon Booster. 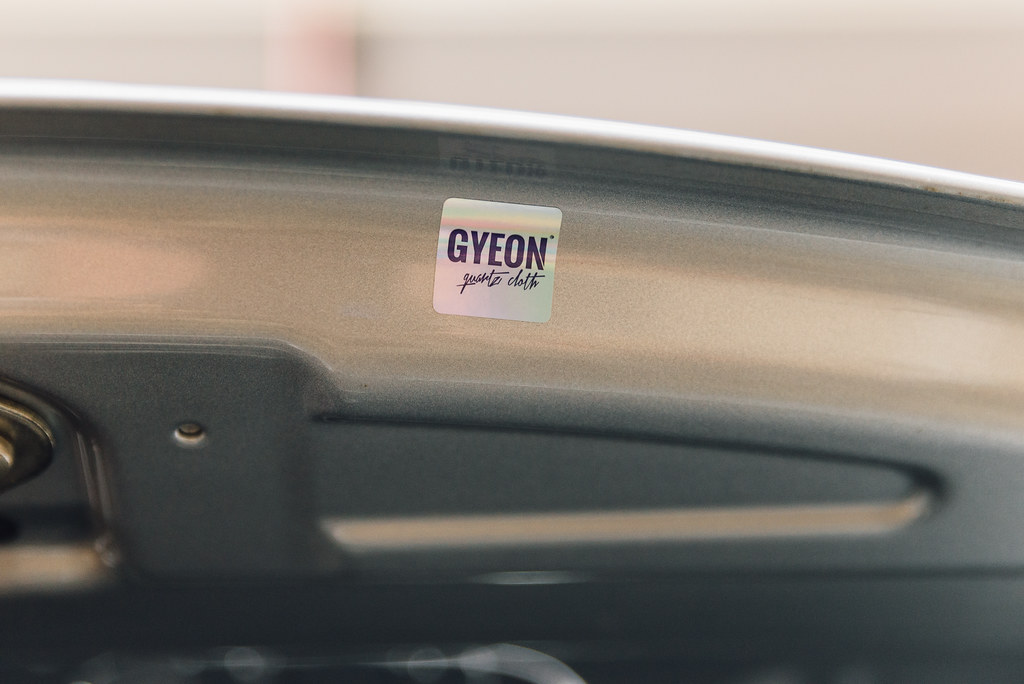 The end result was a beautiful silver finish that glowed in the midday sunlight. 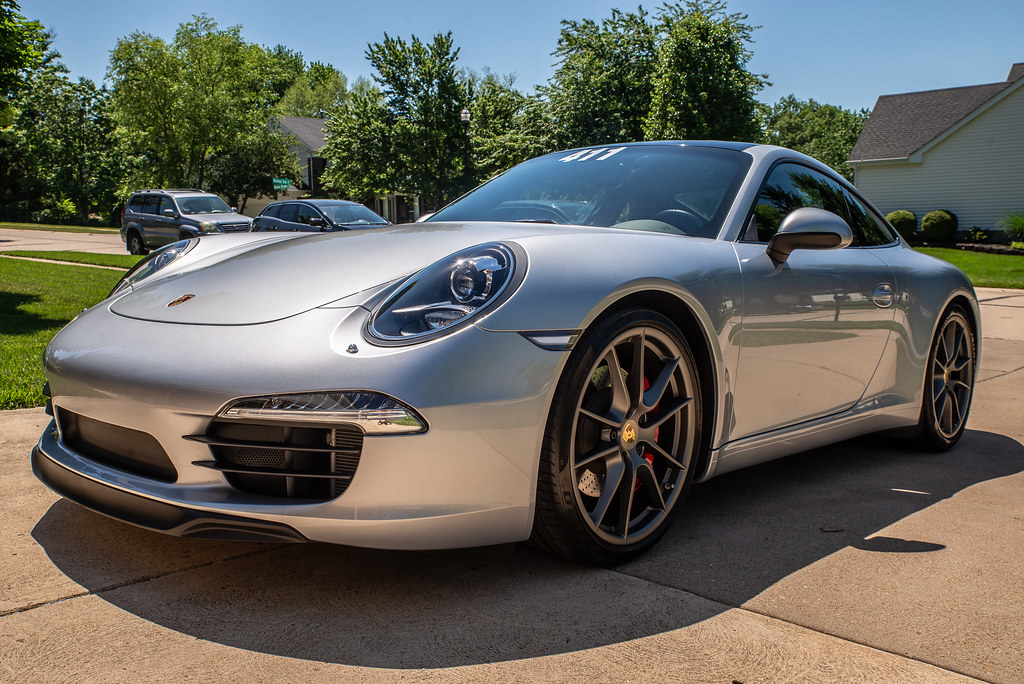 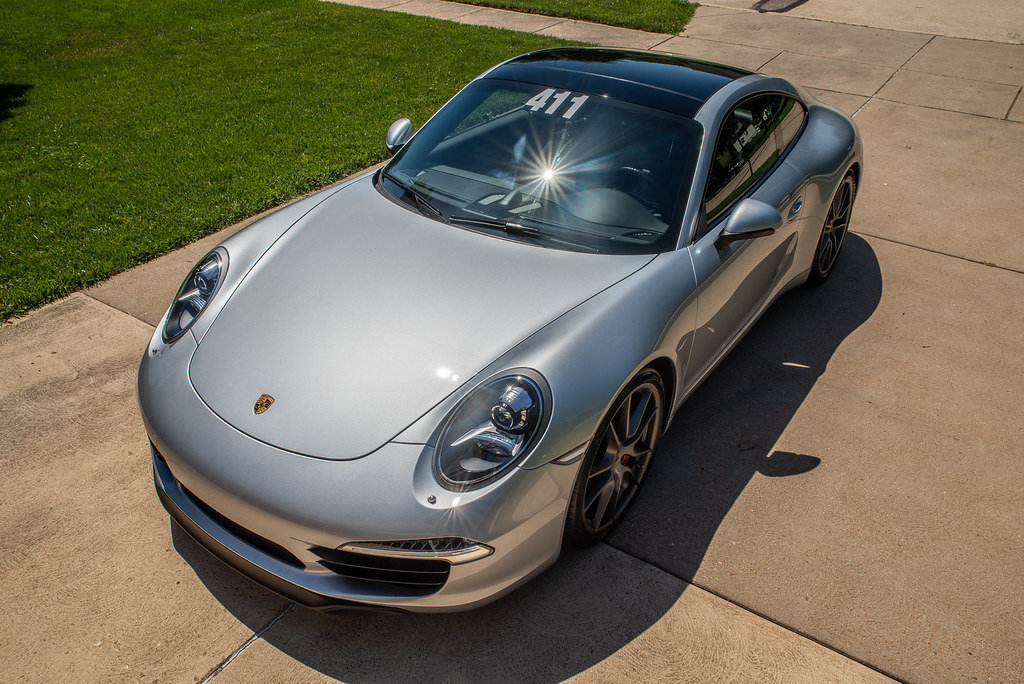 The tires were dressed with Meguiar’s Hyper dressing at about a 3:1 ratio for a nice dark finish that was not particularly shiny,  the exhaust tips received a light polish to remove some build up, and the exterior glass was wiped down. 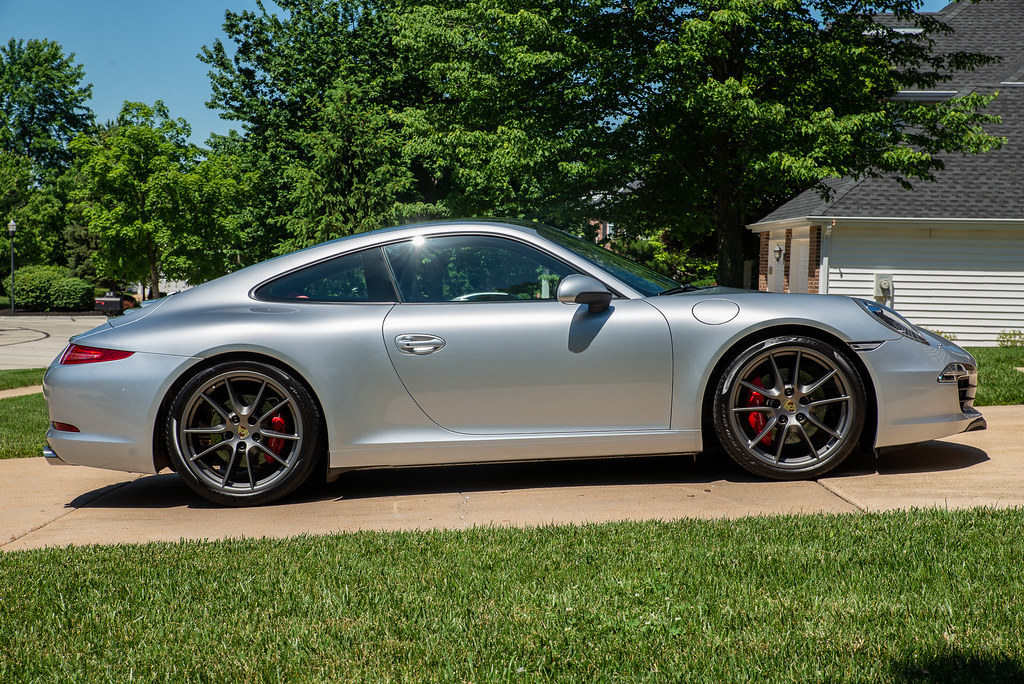 I think it is safe to say this car looks as good, or better, than it did when it was new! 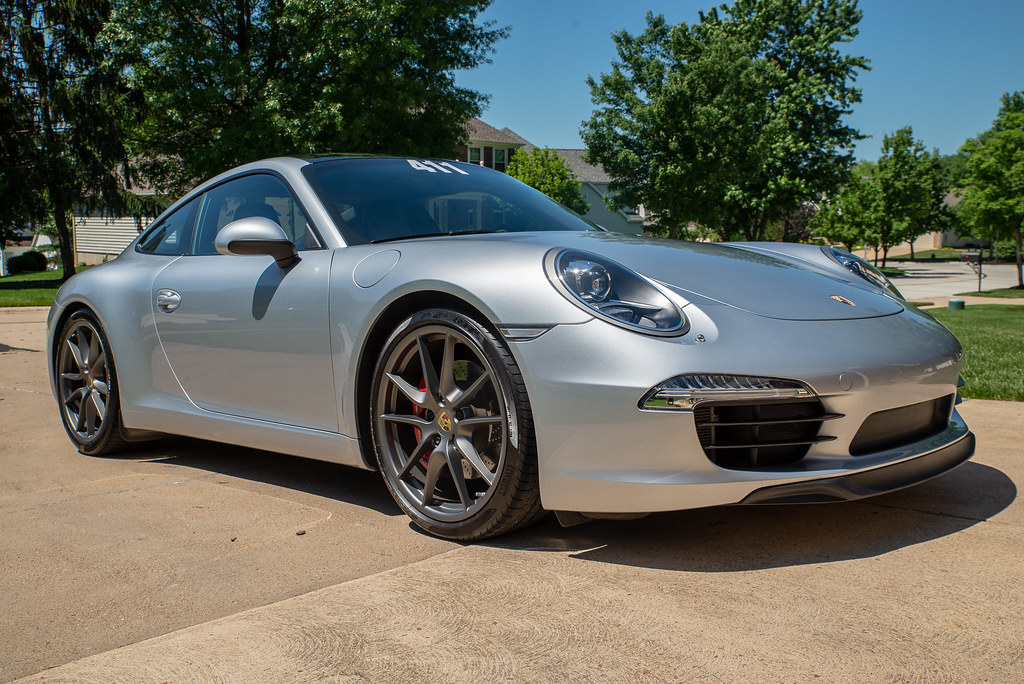