Lake Country has been making polishing pads for as long as I can remember.  They were some of the first pads I used when I got started into detailing back in 2000.  One of my favorite pads of all time is the underrated Purple Foam Wool Pad.  If you haven’t tried it in conjunction with a rotary, you are missing out.  So, when I was contacted a few months ago to use the pre-released microfiber cutting and polishing pads I was excited to give them a go.  Meguiar’s was one of the first to push for the mass use of MF cutting and finishing discs, and I was part of the pre-release group that got to try out those pads as well.  I really, really like cutting and finishing with MF pads, they are my go to when using the dual action Rupes machines.  I have tried using MF on a rotary machine and they will work, but they are not the best choice when using a rotary might make for a later article.

Why MF style pads work so well is the short nap pile stands up, so you can increase the cutting/polishing surface of the pad.  If you think of the pile like fingers standing upright, and rather than just holding a polishing media on the tips of the fingers, it can hold on all sides of the “finger” pile, thus you have a larger surface area to correct with.  If your pile starts to mat down and the pile clumps together, you are slowing the rate of correction as you have decreased the surface area.  You need to clean any pad often, as you work OR change out pads once you notice the level of correcting ability is slowing. Even with good cleaning methods during use, you may have to swap out the pad for a new one and clean them thoroughly at the end.  This cleaning process helps remove broken bits of paint residue, spent media, and raises the pile of the MF up.  Take an old towel and push it into the pad when on low speed, blow out the pad with compressed air, or use a pad washer. Your goal is to get the pads clean for ideal correction ability.  I’ll look into creating a video about these techniques for pad cleaning as well!

Now onto the Lake Country pads! My experience with these Lake Country MF pads has been very positive, and I can easily recommend them to you.  I always try and use a product without too much bias of similar products, however, in reality, we compare things to other things.  Since I have had so much experience with Meguiar’s MF discs, it was hard to not compare.  I would also imagine most of you have similar experiences with Meguiar’s MF discs, so I’ll likely make comparisons so you can see why I feel LC MF pads are a great product you would likely want to try. 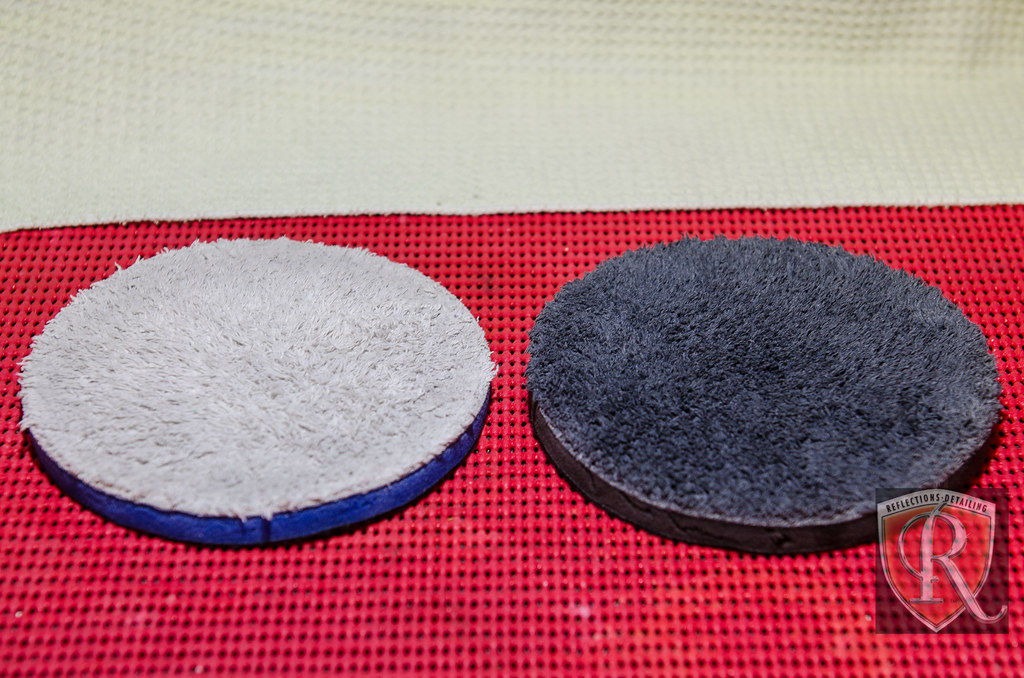 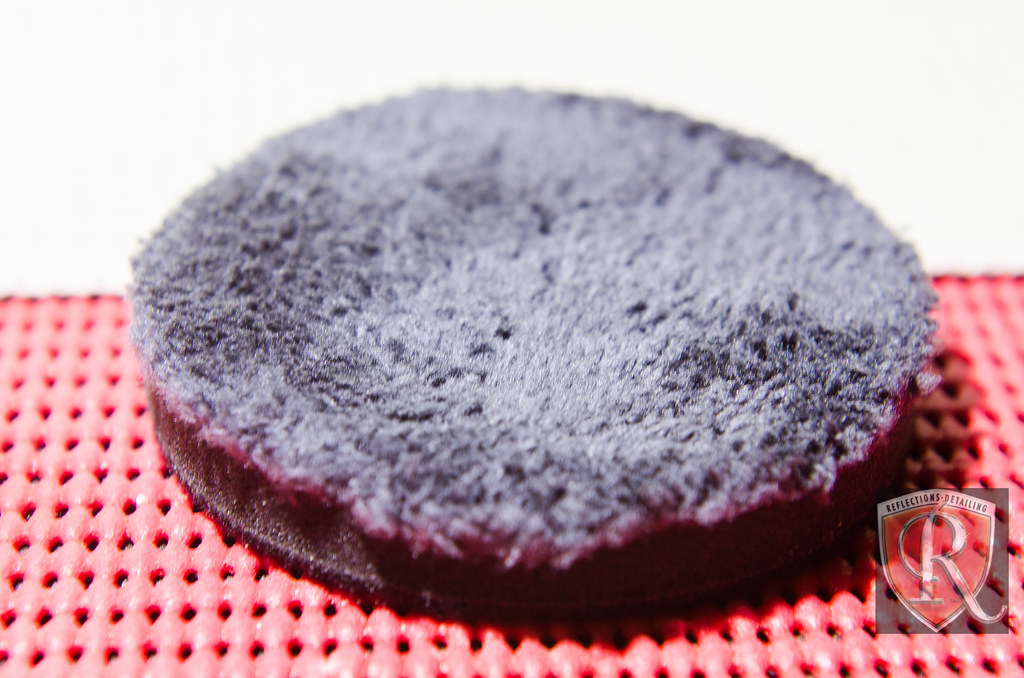 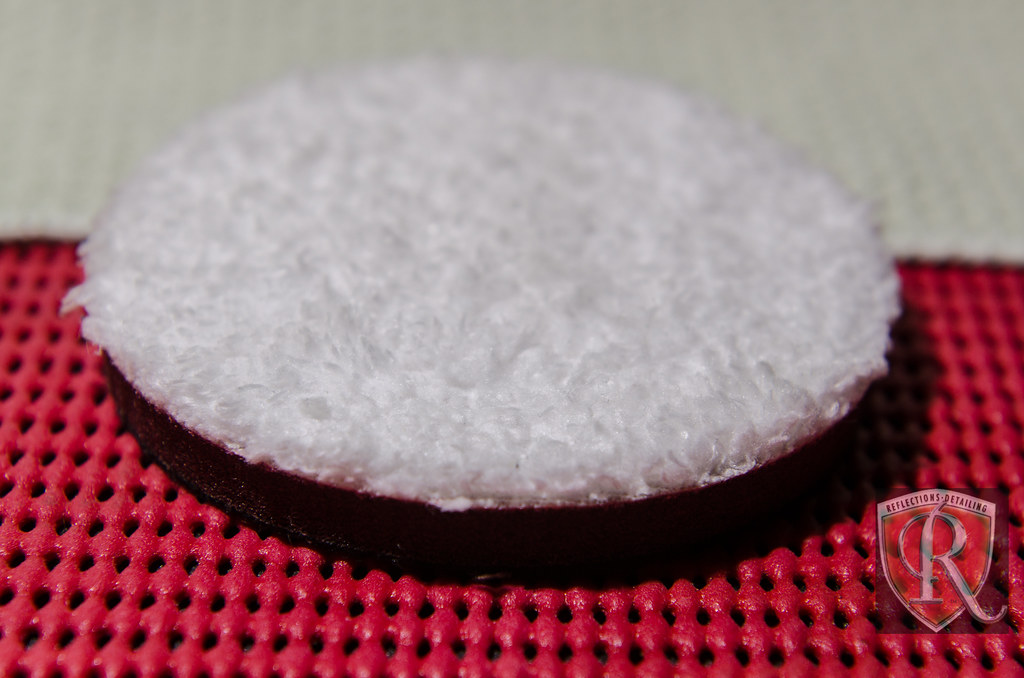 The foam pad interface, while a different color, they appear different in densities too.  I cannot quantify the difference in a standard measure, but just compressing them in between my fingers I can notice a difference.  This true for BOTH the cutting and finishing pads from Lake Country.  The LC pads appear more dense.  The question for the seasoned detailer that knows pad density makes a difference in polishing, is do these density difference make a difference in outcome?  I would also add that the LC finishing pad is a thinner interface over the Meguiar’s. I’ll attempt to address performance outcomes below.

Below you can see on the right how much taller the Meguiar’s finishing disc is to the Lake Country pad on the left. 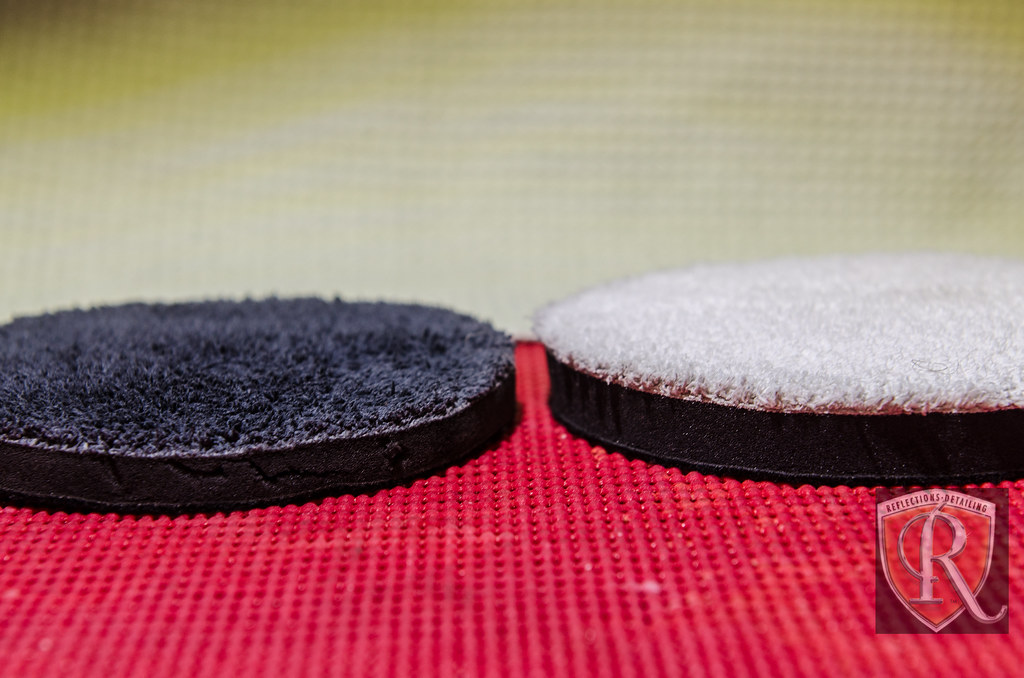 The performance of LC cutting pad after 24hrs of working them on paint, is they work!  They work well and, for me, indistinguishable from the Meguiar’s I’ve used for years.  I tried changing machine speed, downward pressure, media, working time, and arm speed and it performed nearly the same.  I tried it with M205, M105, M100, Hyper Compound, Hyper Polish and they all performed as one would expect.  If it wasn’t for the blue foam interface I might not have known which manufacturers MF pad I was using!  As for durability of the pad, it’s still going strong and I’ve noticed no premature destruction of the pad.  This said, will the fibers and interface take a beating? If you are using a heavier cut compound such as M100, M105, or M101 these compounds will beat the crap out of the MF fibers of any MF pad I’ve used to date.

The performance of the LC finishing pad after 30hrs of working with them on paint is they are different, but effective!  Some of you know that Kevin Brown, Bryan Burnworth and others found in a serendipitously way that M205 and a Meguiar’s MF finishing disc is a defect slayer with excellent finishing qualities to boot.  This process with a few techniques is many detailers go to combo and 1 step enhancement polishing jobs.  It is my go to base line for when I do a test spot on a car to figure out how much correction time will be needed, and thus I can give a pretty tight cost frame for the work.  So, with this huge bias, I attempted to use the same mentality to this new LC MF finishing pad.  After many hours of trying to replicate similar results, I started to look at the pad closer and see how they were different.  The foam interface, while a tad more dense in my opinion, is also taller than the competitors, and the MF fibers are slightly longer too.  Again, I didn’t spend much time to quantify these differences I did notice this LC MF finishing pad did an outstanding job of finishing the paint to a high gloss look, it didn’t “cut” like I was used to.  I changed all kinds of the variables to get it to do as I always believed it should be able to do, and it changed my thinking.  This is a brilliant MF finishing pad and I was trying to get it to perform a task outside its performance design.  I had fallen into the detailers rut of a narrow band of thinking and I’m a BIG proponent of thinking outside the box…yet I fell back into the narrow detailing pit of despair.  This is an outstanding dedicated MF finishing pad and that is exactly the performance window of design it was built for. 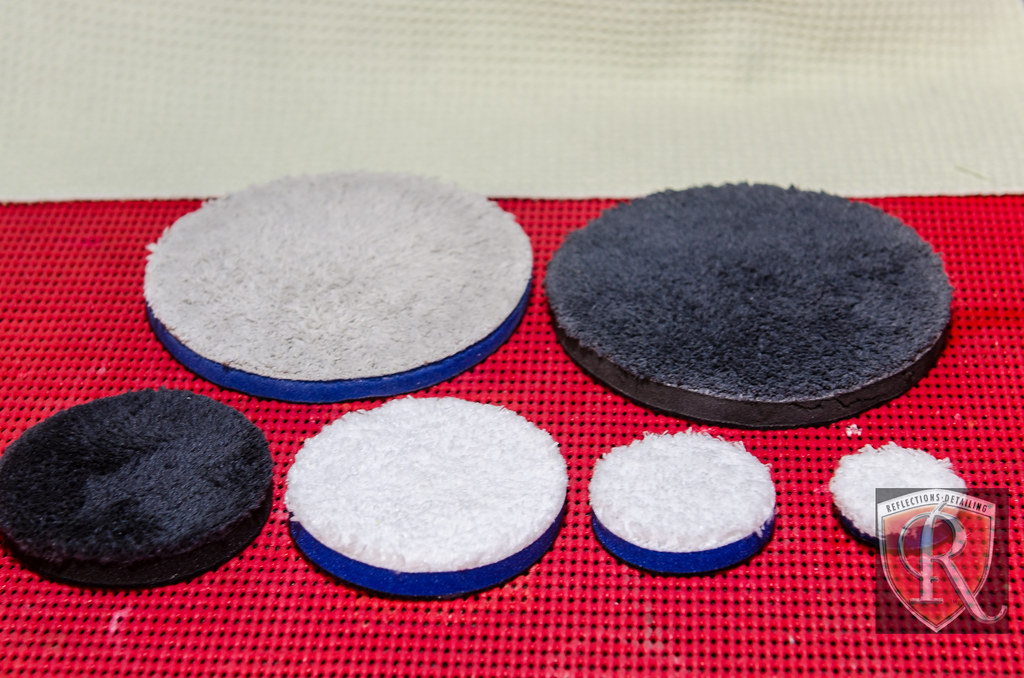 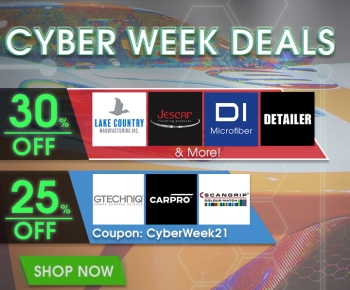