We are back again, working on a heavily modified BMW F80 M3 interior. In this video, we discuss how to approach door panel cleaning. Door panels are one part of the interior that gets heavy use and picks up a decent amount of grime along the way. We talk about how to address different soil levels with a variety of simple and effective tools. With a few quality products, you can make a massive improvement to your door panel materials as well as any part of your interior. Thanks for watching and comment below with any questions.

Hey guys, James here we are working on a 17 F80 M3 competition. It has some really cool touches in it, a lot of carbon fiber in the interior. And we’re starting an interior detail and I thought we’re going to start with the door panels. It’s an area I like to start with first for whatever reason with interior detailing. And I just wanted to kind of show you guys how we approach door panel cleaning. And just like everything, there’s levels to it that depending on how dirty a specific panel is, what is the, the type of material we’re working on. But there are some general rules of thumb that I think we can kind of go by just to get the concepts down. First up right is we want to clean the leather, the vinyl, the plastics and all that type of stuff.

And how do we approach that? What I like to do is use a mild cleaner. Try, just like everything, right? You wanna try the less aggressive approach first and then you know try other cleaners that may be more aggressive. If the first one that was less aggressive didn’t work out. For this example, we’re going to use a product by Nextzett cockpit premium, have been using it forever. Love it. And I’m gonna kind of just show you how we approach the door panel cleaning procedure, which it starts out with spraying a little bit of cockpit premium right into a boars hair brush and kind of circular motions. Start kind of brushing out this vinyl of the leather. And what you’re trying to do here as you kind of build up this lather is you’re suspending the dirt now.

So the dirt was kind of embedded in this material and you’re suspending it. That’s when, if we just left it like this, then it would dry in the dirt, would boot kind of go right back into that material. So what we want to do is then grab a microfiber towel and start and pick up that suspended dirt. Obviously microfiber does a great job at picking up dirt and now that it’s suspended, it can be easily picked up with a microfiber towel. So again, your approach will totally be dependent on how dirty a specific surface is. For example, you could absolutely get away with just spraying a mild interior cleaner into a towel and just wiping that surface and then coming in with a secondary towel and just making sure that all that residue is gone. That could be your total approach and be totally fine.

If the car is relatively clean, maybe just needs a mild kind of dusting to, to set it off and to make it look perfect. Again, in most cases, say, you know, it’s been a little while since you’ve gotten to it. And you have some kind of some scuffs on the door panel, which is inevitable, right from getting in and out of it. You have some built up dirt here that kind of stuff. That’s where I think the Boars hair brush comes in spring. You know, kind of like what we did, sprang a little bit of cleaner building up that lather. Coming in with a microfiber towel, picking up that suspended dirt and then having that secondary towel was always a great idea to kind of just inspect and making sure you’re getting a nice uniform finish. Sometimes on cars we’ve worked on, there’s old kind of armor all type dressings on there that kind of have created like a blotchy effect.

So that secondary towel kind of just makes sure it kind of ensures that you’re getting a nice uniform satin OEM, non glossy finish. That’s kind of our goal and that’s why that secondary towel is important. Same thing, just like everything, right? Always inspect with the light. The light doesn’t necessarily come into play with the main panels. But where I think it comes into play is again, you know, we’ve, we’ve talked about swabs a bunch of times, you know, these little kind of crevices in between the the buttons here running a swab through here is gonna get all that dust out. Same thing up top here. Moving this door handle back and coming in here with a swab, just getting these weird places right that you wouldn’t normally think is really kind of what separates, you know, an interior detail from an interior detail.

And using that swab light technique and help you kind of get into all these little weird areas. Come in here with a towel, you know, pickup that suspended dirt. Really, really, really helps. And then when it comes to like, you know, a, a clear coat finish like this carbon fiber, what I’d like to do is seal it with a paint sealant with a quick detailer. In this case we can use a little bit of quick detailer, kind of come in here. It’s going to create a nice glossy finish. It’s going to be protected, it’s going to really, really, really pop. When a customer or when you get into a vehicle I love to do that on door handles. Anything that’s clear coated sometimes the middle audio speakers you can do that with and it just kind of creates this nice contrast between a nice matte leather surface.

And a super, super, super glossy trim piece. It just kind of creates this really nice effect. But that’s kind of how we typically approach, you know, a, a door panel treatment. And in some cases, if it’s super dirty, grabbing an all purpose cleaner sometimes introducing steam can really help pull out, cause your goal is to pull out the dirt safely and then pick it up. That’s a really kind of the concept that you want to be thinking about when you’re approaching really any type of, you know, whether it be on the seats, door panels, anything like that. Those are kind of, that’s the, the one concept you really want to be kind of thinking about when you’re approaching it. But I appreciate you guys watching. Thanks again. See you soon. 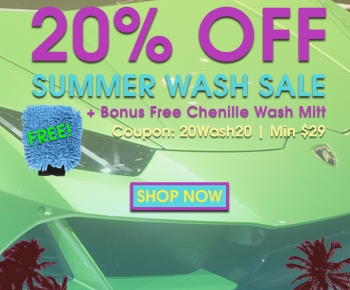