In this article, I’ll discuss simple, yet important ways of cleaning your polishing pads both during and after performing polishing work.

After purchasing a brand new polishing pad, we throw it on the polisher, get some polish on it, and have our way with the swirls on the vehicle’s paint.  Once done with the section, we wipe off the polish residue and below we find a greatly improved finish that is simply glowing.  Fast forward 1 hour, we’re using the same pad, polish and machine on a section of unpolished paint, but after wiping off the residue we realize the results are simply not the same as the first few sections.

Due to their nature, polishing pads will absorb oils and abrasives from the polishes used with those pads.  Over a certain period of time and after a certain number of polished panels on the vehicle, the pads will get saturated with both the contents of the polish as well as paint removed from the vehicle during polishing.  Due to this saturation, the pads will not only lose their corrective ability, but we’ll also see splatter coming out of pads due to all the polish and paint residue sitting within the pads’ pores.  Dusting at this point is almost a sure thing with most machines.

Here you can see the difference between a fresh pad that has been used on only two sections, roughly the size of a trunk lid, and one that’s been used for a lot longer during the same polishing session. 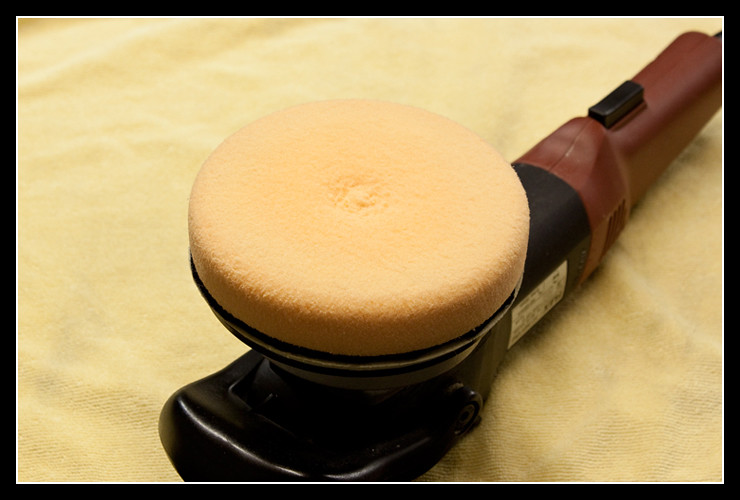 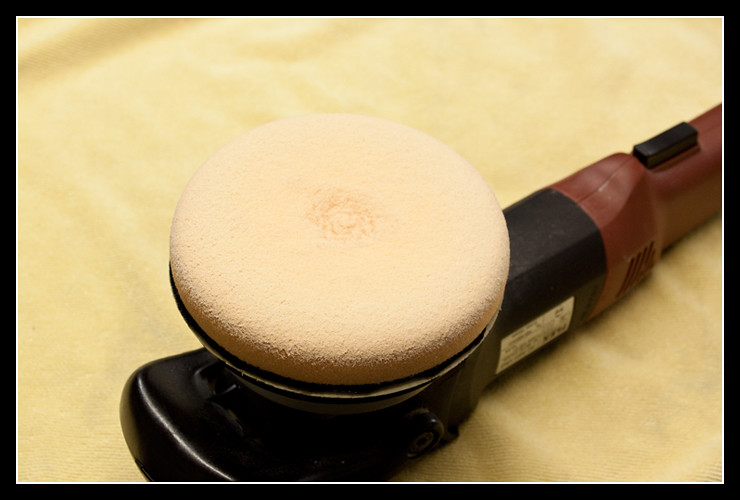 As you can see, the pad in the second photo is completely saturated with polish and needs to be cleaned. Below is a side by side comparison of two sections polished with the same machine, same speed, same pad and same polish showing different results due to one pad being over saturated and over used.  This is composed of three different photos so please excuse any noticeable splices.  I did it for the purpose of showing the three different sections well and how they compare, rather than trying to show off my skills of photo stitching :).  While both the left and right sections show noticeable improvement compared to the original paint in the middle, you can easily see how the section on the right, which was polished with a clean pad, came out much better than the section on the left, which was polished with a used, saturated pad. 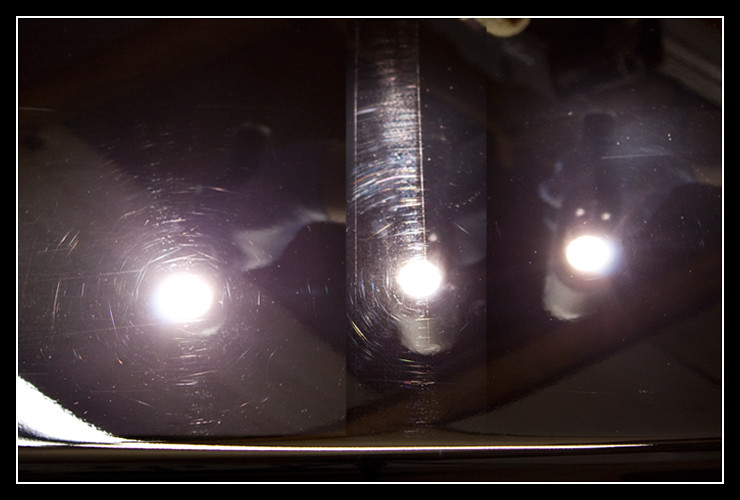 How to avoid this?

There are two ways to avoid this during a polishing job.  Best way is to have spare pads of the same size and cutting ability.  This way, once the original pad starts to become ineffective, you simply replace it with a fresh pad and keep polishing.  This ensures that you’re getting the most out of all your pads and the best results possible out of the paint.  Even with the spare pads however, you should be cleaning the pad after each section or two in order to remove all the residue and dust that has formed on the pad surface.  Here are two methods to do just that:

As mentioned above, cleaning pads during polishing is important in order to keep up the pad’s cutting ability and keep getting good results while correcting the paint.  To do this, you’ll simply need to purchase a small plastic brush with fairly stiff bristles.  You can usually find such brushes at any local auto parts store and even some grocery stores.  Here’s what the couple brushes I use look like: 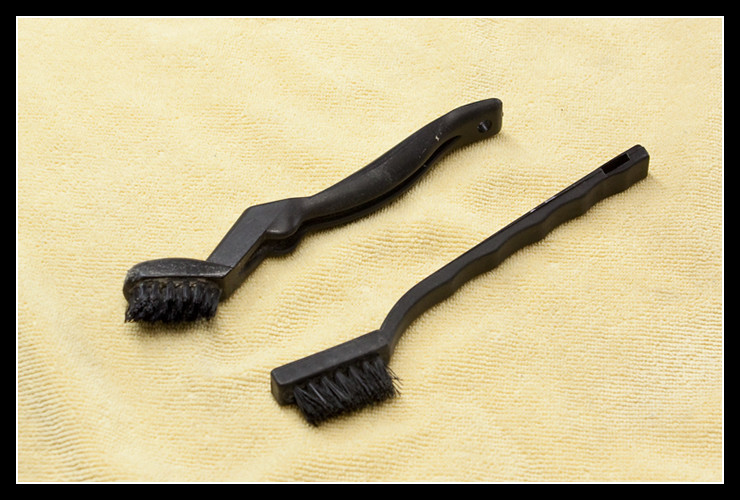 Now that you have your brush, let’s put it to good use.  Once you’re done polishing a section on the vehicle and are getting ready to move to the next, simply grab the polisher, flip it over, and turn it on while pressing the brush lightly against the pad surface. 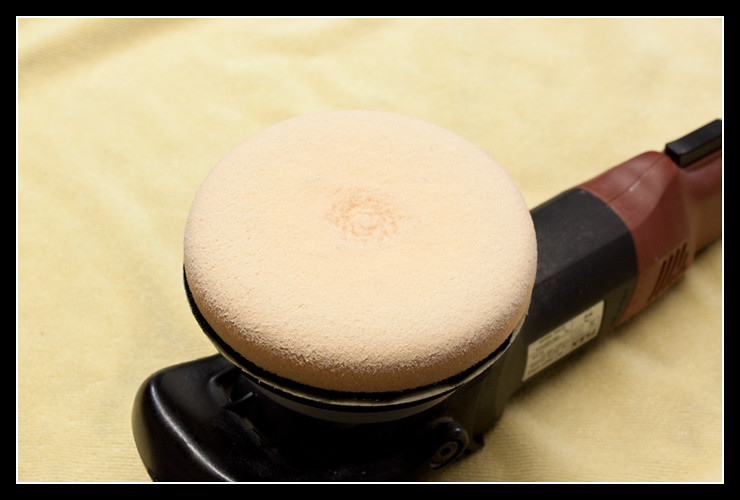 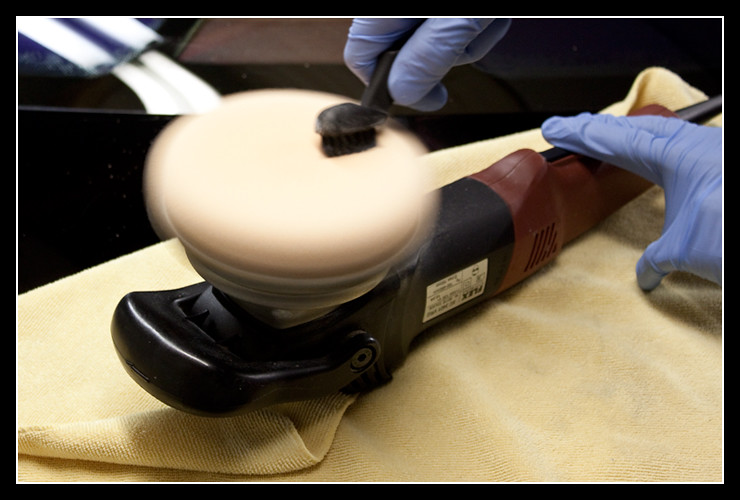 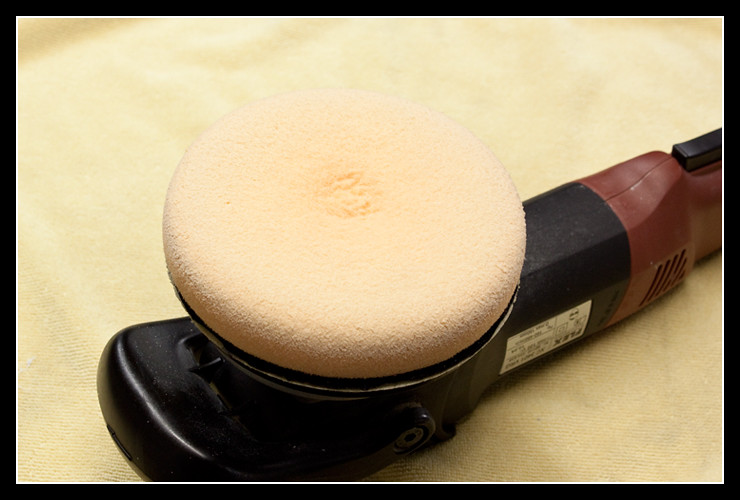 Yes, it’s that simple!  The pad will be much cleaner for the next section and will still provide great results until it gets too saturated and needs replacing with a fresh, clean pad.  Now you’re ready to apply some more polish and keep working.

The machine you’re using determines the method of cleaning the pad during a detail job.  As you can probably tell, I am using a Flex XC3401 VRG polisher here, allowing me to utilize the rotating force to clean the pad.  With such tools as the Porter Cable 7424XP, you’re unable to do exactly what I have described above since the pad will all but stop moving once you apply some pressure to it.  With the PC 7424XP you can simply hold the pad so it doesn’t move and brush away the residue from the surface.  As you may have imagined, a rotary is completely opposite and has even more rotational force than the Flex 3401XC, so it’s even easier to clean the pad.

The second method of cleaning your polishing pad during a detail job can be used in place or after the above brushing method.  For this method, you’ll be using a clean general purpose microfiber towel and some ONR in a quick detailer ratio.  After finishing a section during polishing and/or after performing the cleaning method mentioned above, you will lightly spray the pad once or twice with the ONR QD and let it sit for a few seconds.  Then press the microfiber towel with moderate pressure against the pad as you turn on the polisher.  The microfiber towel will absorb a lot of the residue within the pad and the ONR QD will help to soften it up and clean it off the pad’s surface. 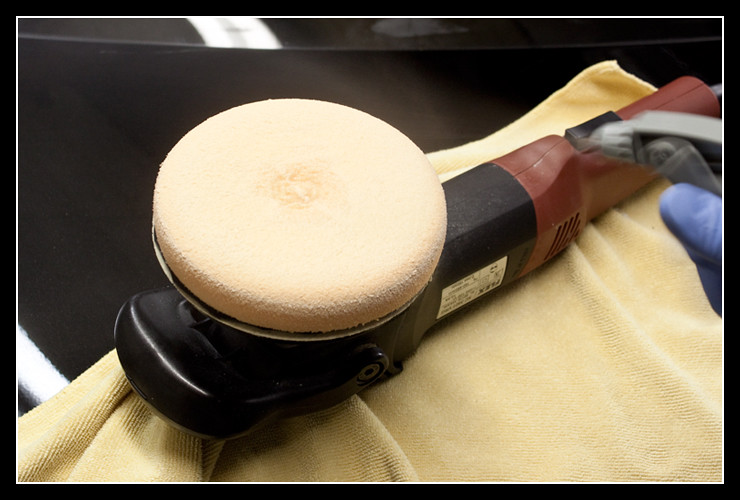 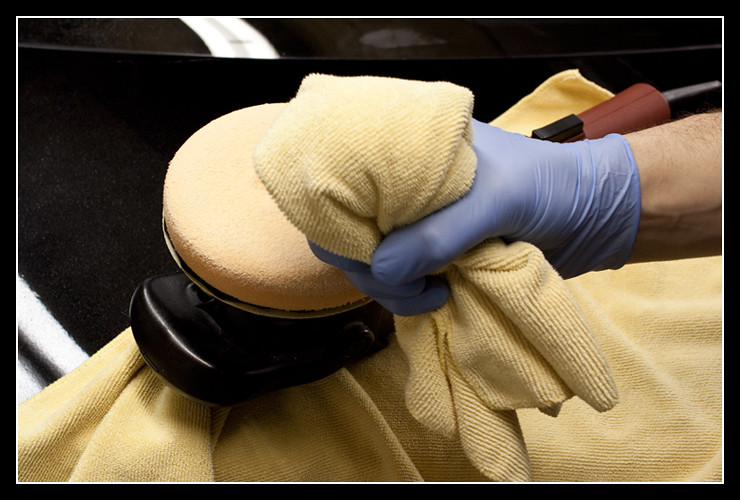 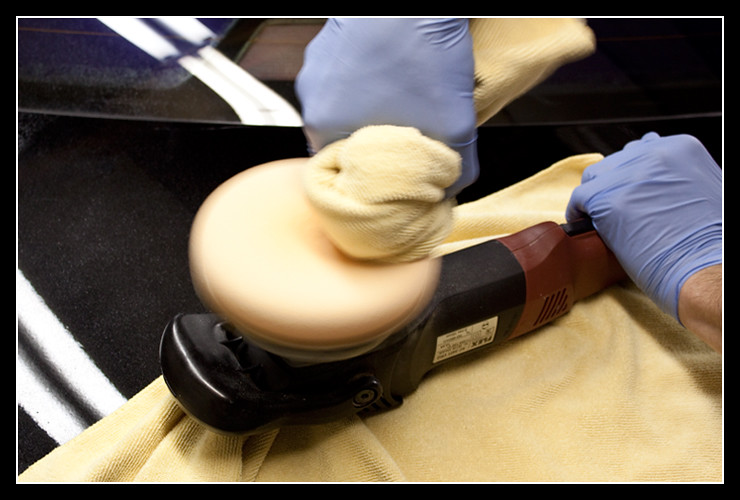 Cleaning pads after work is complete

Finally, the last method of cleaning the pads is done after you’re done working on the vehicle for the day.  The pads have done their job and due to the cleaning methods above they’ve done it very well!  Now it’s time to clean them up so they’re ready for next time.

It’s extremely important to clean the pads out immediately after use because you don’t want that residue to settle in the pad and get hard.  It’ll just be a huge pain to remove later on, don’t ask how I know!  Make sure to do both methods above once you’re done working with the pads before moving onto the following process.  Now grab all the pads and move them to the nearest sink.  Make sure you use a sink where your wife, fiancee, girlfriend or mother doesn’t wash clothes, dishes, etc., because you won’t hear the end of it for a while.  Again, don’t ask how I know.

For this, you’ll only need Meguiar’s All Purpose Cleaner Plus (APC+) in a spray bottle, diluted 10-15:1 with water.  So it’ll be 10 to 15 parts water to 1 part APC+.  Simply spray all the pads with the APC+ “pad cleaning” spray and let them sit, polishing surface facing up, for a good 3-5 minutes.  Spray each pad generously but don’t leave them dripping.  Also make sure to do this in a ventilated area because the smell of APC+ is very strong. 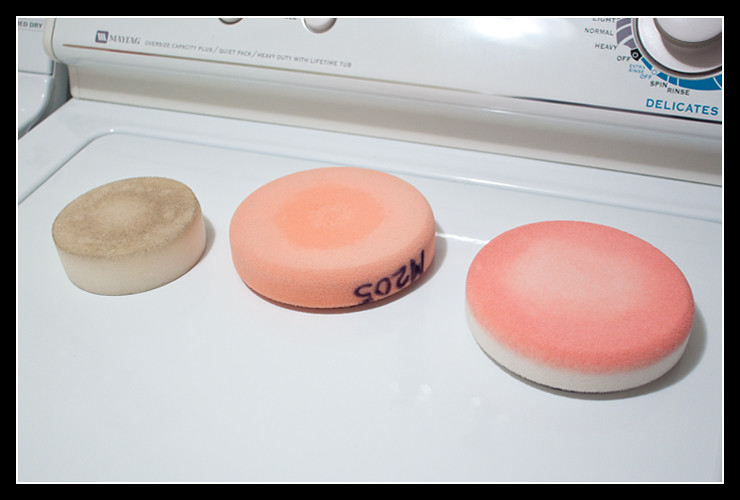 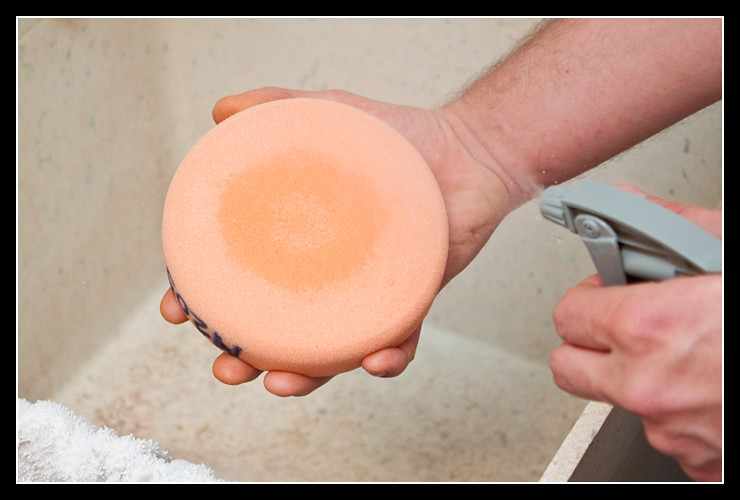 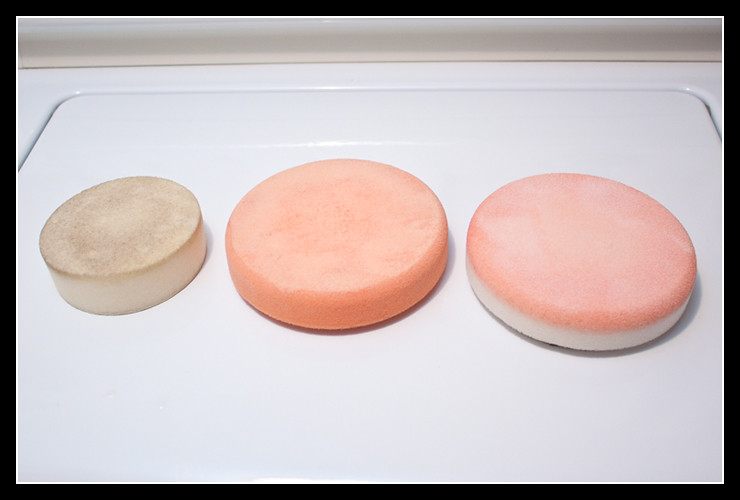 After the 3-5 minutes has passed, turn on the faucet and grab one of the pads, preferably one you sprayed with APC+ first.  Hold the pad with both hands and, while supporting it from the bottom, massage the entire pad surface using your thumbs.  This should take 10-15 seconds.  Once done, keep doing the same massaging on the pad surface, but place the pad under the faucet so the water starts to rinse off the residue coming out of the pad. 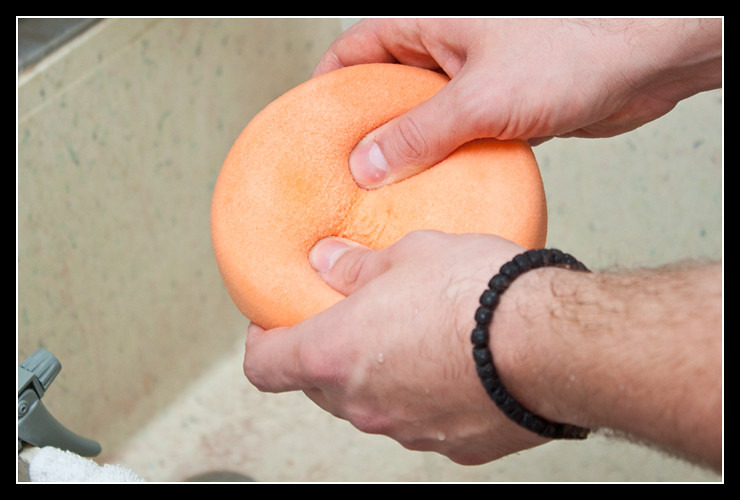 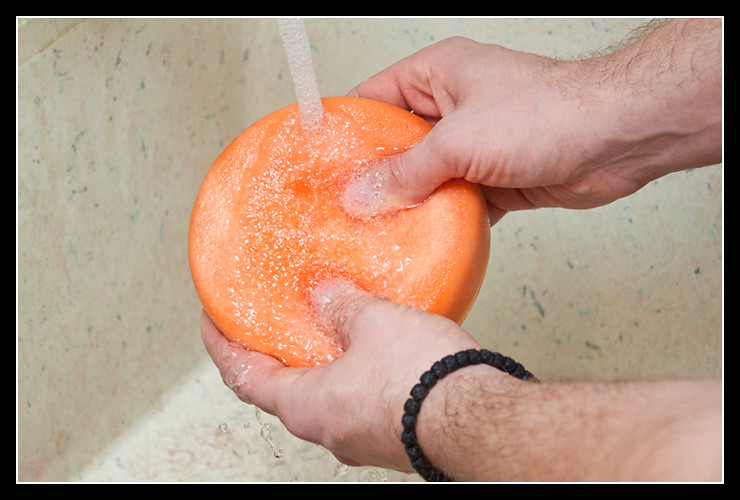 After a minute or so, you should see most of the residue come out of the pad and get rinsed off.  Now you’ll want to hold the pad so the water runs over the entire pad surface, then squeeze out as much as you can.  Follow that by a little more massaging of the pad surface if any residue remains, then do a final rinse and squeeze to get as much water out as possible. 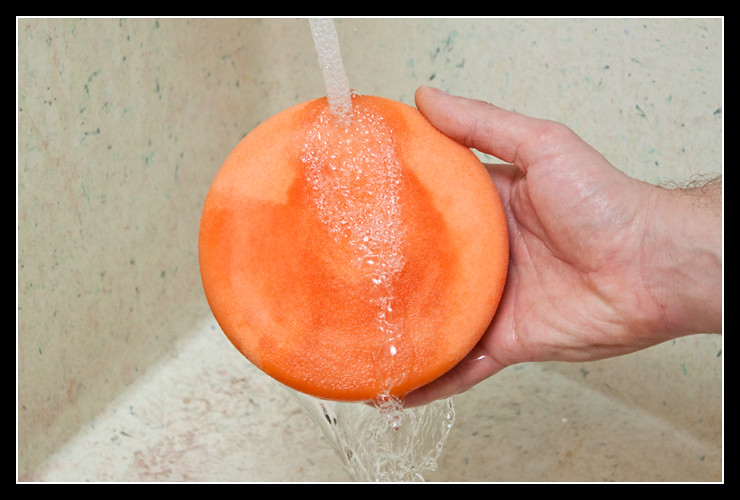 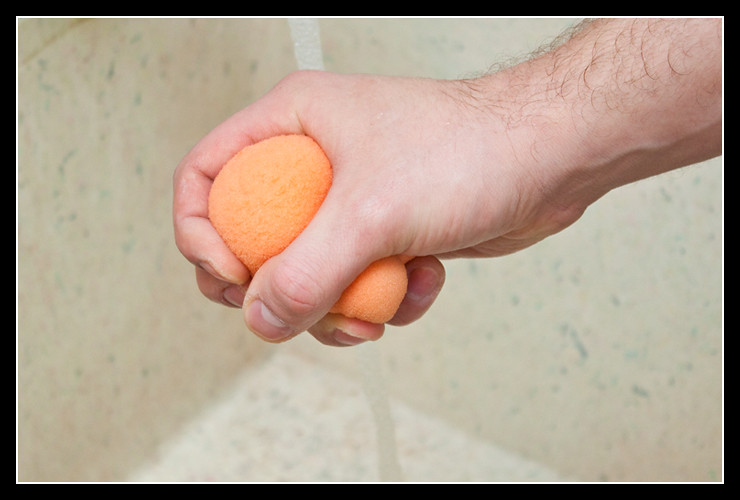 The pad is now clean and ready for drying.

You have two options, air dry or machine dry.  I like to dry my pads in the machine as it tends to be quicker, but I always set the machine to very low or no heat at all so as not to damage the pads.  If you decide to air dry, make sure to place the pads with the backing facing up.  This will ensure the water doesn’t settle by the backing and disturb the glue holding the backing and the foam together.  To help dry the pads, always hold the pad and swing it in the air a few times fairly hard to get rid of some standing water.  Another option is to use a rotary polisher to sling water out of the pad.  Simply place the machine head inside the sink, or outside where you won’t sling water over anything important, then attach the pad and let it run for 20-30 seconds at a pretty fast speed.  In the photo below, I’m using a backing plate that’s actually larger than the pad, whereas it’s probably a better idea to use one that’s a bit smaller than the pad, but it gets the point across.  Lastly, once done with the rotary, you can grab a microfiber towel and wrap it around the pad, then wring out the pad so the water is absorbed by the towel. 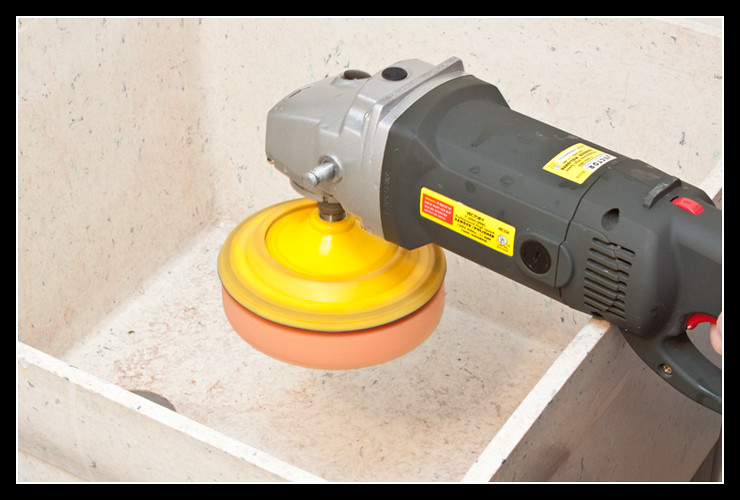 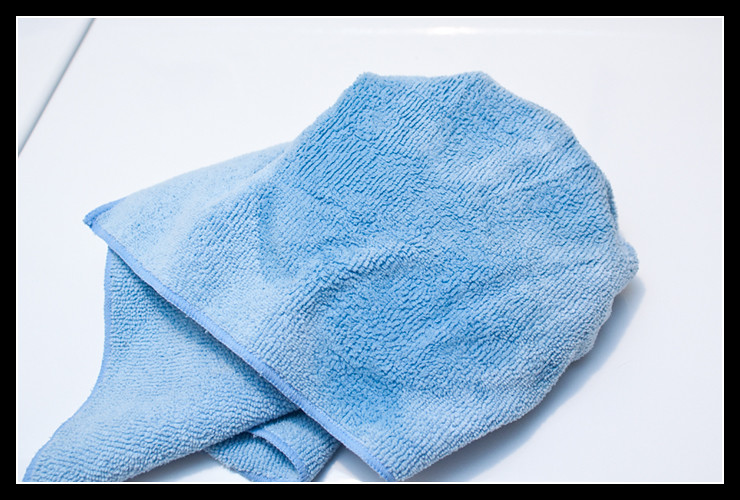 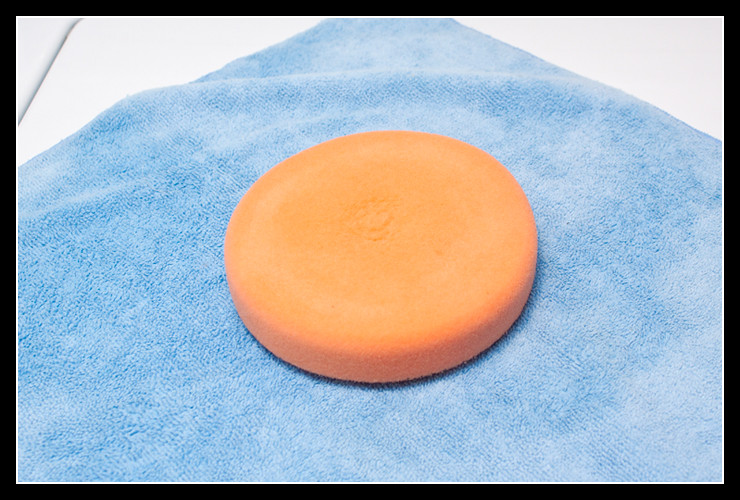 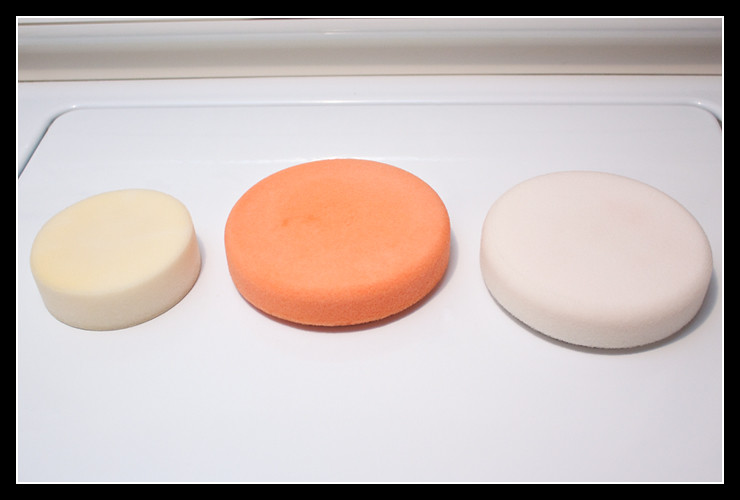 There you have it.  The pads will soon be dry and perfectly clean, ready for the next polishing job.

As always, thanks for reading and be sure to leave any questions or comments in the section below.

26 comments on Pad Cleaning During and After Polishing 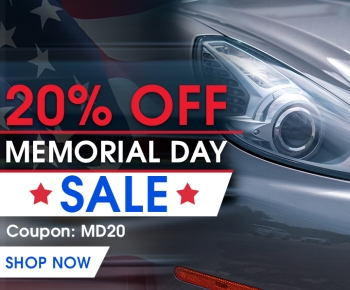