On a 2015 Bentley Flying Spur, I got the opportunity to do an initial test of Oberk Supreme Cut (compound) and Supreme Polish (you guessed it there finishing polish). This Bentley was hammered with paint defects and was the perfect candidate to test out this new combination. We first conducted a compounding step with Oberk Cut paired with their Supreme Microfiber Cutting Pad. Our next step was to refine the paint finish with Oberk polish and their Supreme Foam Polishing Pad. I was really blown away by the ease of use and performance of the pairing. I hope you enjoy the video and thanks for watching!

(00:00):
Hey guys, James here with detailed image. Today we’re working on a 2015 Bentley flying spur. This car came in with a lot of swirls and scratches in it. A perfect candidate for what we would call a two step correction, right? So a dedicated compounding step followed by a dedicated polishing step to remove the defects, enhance the gloss, and kind of produce a perfect finish. What I thought would be I or why kind of wanting to make this video was to highlight some new products. Some Oberk Supreme cut compound and Oberk Supreme Polish. a compound and Polish combination I’ve been hearing great things about. So I wanted to, to put these to the test today, kind of go about a, what would be a multistep paint correction process and kind of highlight these two products. Basically what, you know, when you’re, when you’re approaching a correction job, there’s going to be a lot of variables that are going to get thrown at you, a lot of different paints.

(01:52):
This is typically we’ve done some other other test spots along the way and it’s, it’s kind of right down the middle. It’s not a super hard paint. It’s not a super soft paint. It’s kind of right in that, in that middle ground. So I think this combination should, should do a great job. But before we get that polisher onto the surface I want to do one quick prep wipe down. This is Meguiar’s surface prep. What this is going to do is yes, this car has been washed and decontaminated the clayed everything. But right before I’ve gotten the habit of right before I do a paint correction process I’ll give the surface one final wipe down. And that final wipe down is just all about making sure there’s no dust, there’s no waxes, there’s no sealants, there’s nothing there that’s going to obstruct our results.

(02:39):
That’s the last thing you want is have variables that you could have controlled getting thrown in the mix. And then you know, you’re getting unpredictable results. So I like to do that right before I start the process. And then I like to do a prep wipe right after I do the correction process, just to make sure that the results I’m seeing with, with, with a light like a scangrip are the, are the true results. I’m not, there is no fillers getting in there and obviously there is no fillers in this compound or Polish. But if you say you didn’t know if a, if a compound that you’re using had fillers in it or if a Polish had fillers in it and you want it to be certain that the result you’re seeing is true, then using something like Meguiar’s surface prep is going to be a great idea just to kind of have a little bit of insurance, a little bit of extra extra checking.

(05:16):
Okay. Right out of the gate you guys noticed, Super slow our movements, decently medium to heavy pressure and a nice long working time in this compound, so that’s really nice. So let’s start doing the removal. Let’s grab our light. And I do that, you know, when I’m removing my residue obviously I have in my microfiber towel, this towel rag company edgeless absolutely love this towel, great general purpose towel for Polish removal, all that kind of stuff. And I pair it with, I usually always have a, an a a scangrip on me just for, for residue removal. Again, just to make sure I got all the residue off and I’m kind of, I’m checking as I start to kind of slowly wipe away this residue. And what I’m noticing is no defects, which is a great thing. A defect-free paint is a, is a beautiful thing.

(06:11):
Not a ton of haze, which is nice. And I was using pretty heavy pressure and we used a decent amount of compound there on that pad. Plus this is obviously a heavier cutting pad. But a really nice I should say it’s a manageable finish, right? It’s a finish that I can easily, Oh, I know that I’m going to, I’m going to have one more pad and Polish combination, boom. And I’m going to be ready for my protection stage. So it’s not, you know, I’m sure you’ve, some of you have experienced compounds that leave such an aggressive compounding Mark that it’s going to take two, three different stages to basically finish that down. In this case, we have a very, very easy finish to then maximize and get to it. Like to a, to a brilliant finish, to something that’s the clarity is, is, is spot on. So let’s go right into that. So let’s go medium. Actually, let’s go. Let them stay medium. We’ll go medium polishing pad. And let’s go Supreme Polish. So again, let’s do a couple of drops. A couple of dimes size drops in this case, let’s do four. And we’re going to basically repeat that exact same set step. The only thing that we’re going to adjust is our our pressure, right? We don’t have to be as aggressive in this case. So we’re gonna use about lighter to medium pressure and get right into it.

(07:54):
Super long work time on that Polish just seems really nice. So we’re grabbing our light again. And let’s start removing. Boom, that clarity is popping right out now. And let’s grab our surface prep. Let’s do a light mist just to ensure everything, any, any residues have been removed.

(08:28):
Okay. That’s looking really, really nice. So basically in two very, very, very simple steps. We have a perfect finish. We have completely defect-free our clarity is up, no micro marring, perfect with two pads and a compound or Polish combination. I think the biggest compliment I can give this particular combinations is that it’s super predictable, right? You know what you’re going to get. I didn’t have to adjust a thousand variables. I didn’t have to say, okay, Nope, I need more pressure. Nope, I need more arm speed. I need all those different things. I was able to just go with my typical procedure, put a couple of dots of compound onto a cutting pad and eliminate all the defects. And then in the same, in the, in in the same instance, grab the Polish, put four drops of Polish on a, on a pad, do that simple cross hatch pattern with medium pressure, slow arm speed, and boom, we have perfect paint.

(09:29):
I think that Oberk has nailed it as far as usability the feel of their polishes. They seem extremely user friendly. So if you’re, say you’re at home and you’re like your, your, your, your car needs, need some love and needs need some defect removal fast, I think this is a great combination to consider. Something that’s easy to use, doesn’t fight ya. And you’re gonna get an awesome result. I’m going to bring you guys in so you can guys see this 50, 50, a little bit. Where we started from, where we’re at now. But Oberk nailed it. Nailed it. Thank you guys so much for watching. If you have any questions on these, on this product line, please email us or comment below. We’d love to hear from you. Talk to you guys soon. 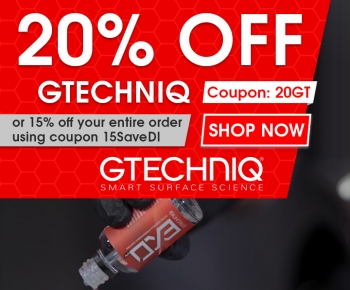