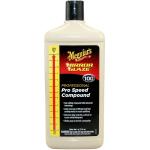 100% of customers said that they would buy this item again

Reviewed by Dennis S. on 2/20/2021
DI Verified Purchase
Would they buy this item again? Yes
If you have hard paint then I would recommend this product. You can feel how gritty it is just by feeling it with your finger. Used this one black mustang paint. It removed 90% of swirls with a da and microfiber. It is meant for use with a rotary but da will work fine. Keep in mind two things. You must finish this out with a fine polish or finishing polish. Also, it dusts like crazy. I recommend not overloading the pad. I had to fight dusting throughout the whole process. Apart from that, great product and works as advertised. Take your time and always check your work in the sunlight. It speaks the truth about your work.
Reviewed by Mike D. on 7/25/2019
DI Verified Purchase
Would they buy this item again? Yes
Have used with both a rotary and a DA. Took 2000 grit sanding out like nothing. Highly impressed
Reviewed by Arnold B. on 7/25/2017
Would they buy this item again? Yes
I call this my "rocks in a bottle". If this doesn't work it's sand or move on. Yes it will remove 1500 grit sanding marks. It was said that this should only be used with a rotary but I've had no problem using it with orange pads and DA. Don't use it with a yellow pad unless you plan on doing more work on that section. Too extreme for me. This stuff does dust less than 105 and has a longer working period. If I don't want to waste time on a very bad area this is what I go to. I tried it against Menzerna 400 and the M100 won that contest.
Reviewed by Dan C. on 1/13/2017
DI Verified Purchase
Would they buy this item again? Yes
I've had this product perform miracles.

I actually prefer it with a 60ppi, "heavy polishing" pad, like the Pink Lake Country. I've used M100 and that pad to remove 1500 grit from single stage paint, and hard ceramic clear coats using a first generation Porter Cable 7424. Years ago, that just wasn't possible, and I had to use a rotary.

Pros:
- Price is unbelievable.
- Cut is right up there with compounds more than twice it's cost.
-Great to use in the sun, it is very moist.
- A little goes a long way.

Con:
- It dusts a little more than I'd ideally love. But it's not the worst I've used, that's for sure. Add in a little Meguiars D300 usually fixes the problem.
Reviewed by Vincent B. on 7/11/2014
DI Verified Purchase
Would they buy this item again? Yes
This compound is awesome. It works really well with the orbital polisher and the meg"s cutting pads. I find it works well on dark colors and is more aggressive than the correction compound. If you start with a standard buffer and foam pads then Finnish with the orbital the results will impress you. i find the paint to glow after the final step applying the wax product.To cut deep scratches start with a wool pad and step down from there to foam then and orbital. the results are impressive.
Reviewed by Carlos G. on 3/3/2014
Would they buy this item again? Yes
Meg's Pro Speed Comp M100 very satisfactory results! Used GG DA 4.5 on setting, Megs 5" MF Backing Plate, Meg's 5" MF Cutting Pad.

MBenz S63 AMG Black finish. First of all need to say since client has a ton of cars this one wasn't really "special" meaning it sat outside in the elements and was very neglected. Well as we all know cars left outside, especially under trees, with time tend to accumulate bird poop etching amongst other things. After washing and prepping tried to remove with D300 on MF pads but no luck. OK no go so then I decided to step it up a notch and tried my new bottle of M100 on MF pad. (I was introduced to M100 by the Meg's guys while visiting with them at their SEMA 2013 booth) Kicked up the speed on the GG DA by .5 and proceeded to work in the comp into the bird poop etched areas. After working in the product with moderate pressure and few passes I removed and cleaned the residue. Sure enough the etching from the bird poop was completely gone! Very impressed as I've seen others wet sand bird poop to remove it. As we all know least aggressive method first before going hard core. Saved me lots of time and when all said and done all the bird poop etching was gone. Cool I thought, Thank You Meg's guess my Vegas trip wasn't in vain!!

This client's son and daughter thought it be nice to use the rear passenger side quarter panel as a "chalk board" if you will. Except that instead of using chalk they used a sharp object such as a screwdriver or something similar to engrave their names on the rear panel. After seeing the depth of the damage done by the pointed object I notified the client that it might not come out completely. He understood and said that he was already planning on taking it in and having it resprayed again due to depth of the damage done.
Ok cleaned and prepped area first as needed. Broke out the GG DA, 5" MF cutting pad on Meg's 5" backing plate. Applied some M100 Pro Speed Comp and kicked up the DA to full all out speed setting of 6.
I rarely use speed setting 6 on this machine especially when using MF pads due to excess heat. However I knew by damage done that I had to give it full speed if any of the deep scratches were to come out. Hit area harder than usual with heavy pressure on the DA. Used several over lapping passes, then back again then finally wiped off the comp. Visually inspected and also felt surface to gage how much heat was being generated. Sure enough surface temp very warm so few sprays of water then wiped it off. Not bad most of the names were gone but some still left. Applied a few more drops of M100 and went over the section again over lapping passes. Finished section and cleaned it up and 95% of the scratches were gone! One deep scratch was near the crease of the panel so didn't work it too hard as to not burn the paint there. If it could've been taped off I would've but just in a very tight area so left alone. Needless to say client was very pleased with results.

I've also used the M100 on same Meg's 5" MF system while compounding darker Porsche 911s. It def has a much stronger cut than D300 and when used with much higher speed settings on DA it can remove RIDS and bird poop etching. However when compounding larger panels it will leave behind a white "cloud" looking film in the paint. Not micro marring as with other compounds but rather a cloudy film that will go away once the finishing step is done. Some of this surface clouding can be removed by spray misting the panel then wiping with a microfiber towel. However must be careful not to use too much pressure or you can damage or introduce more swirls and have to redo surface again. Hence why I prefer to leave it alone and just deal with it in the finishing stage. Anyways just thought I'd share my experiences with Meg's M100.
I have lots of compounds in my collection but learning to use this when other products required results aren't achieved. Grab a bottle and give it a shot next time you can. I'm sure like me you won't be disappointed! 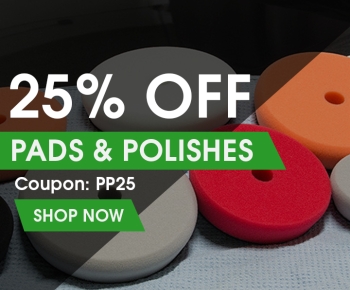